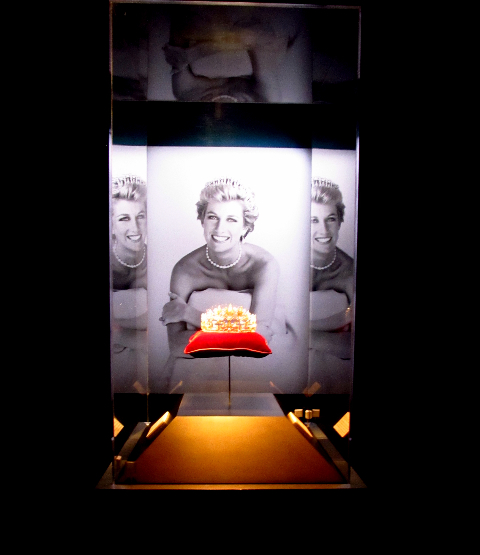 Dimond tiara once worn by Diana, Princess of Wales.

Diana: A Celebration is now open on the Mall of America’s fourth level, in the former America’s Original Sports Bar. Located across from Cantina #1 on the way to the mall’s movie theaters, and a stone’s throw from Hooters and Dick’s Last Resort food establishments, it seems an odd place for a lady of Lady Diana’s caliber.

Although the top floor of the Mall of America retains its gloomy appearance, all that is overlooked when visiting Diana: A Celebration. It is high-class, sophisticated, and worthy of the museum-like feel inside, an award-winning exhibition celebrating the life and work of Diana, Princess of Wales.

I am of the generation rising early the morning of July 29, 1981 to watch the fairy tale wedding of Lady Spencer, 20, to Prince Charles, 32, on my Minnesota television set. Seeing Princess Diana’s wedding gown was something I never thought possible. Until now. When I received an invitation to the press preview night of Diana, I dropped everything to go see “the gown.”

And there it was, prettier than I imagined: a silk taffeta, ivory tulle and lace masterpiece, the famous gathered sleeves at the elbow, the puffy veil with the 1830 Spencer tiara, and sparkling 25-foot train.

The gown’s lengthy train can’t be fully displayed in London because its permanent home does not allow for the complete extension. “You are so lucky because you can see [the wedding gown] in all its glory,” said Graeme Murton, Art Handler of the exhibit.

The gown itself weighs just two pounds but contains many petticoats. “The underskirt [of the gown], that’s another story,” said Murton.

A touching photograph of Lady Diana in her carriage wearing her wedding dress has a hand-written inscription that reads: “With all my love your devoted daughter, Diana.”

Although Lady Diana and Prince Charles eventually divorced, the exhibition does not exclude him and visitors relive the couple’s happier days.

A regally dressed Beefeater, the cermonial guardian of the Tower of London, greeted media at the Feb. 3 preview. Plenty of Elton John songs play throughout the exhibit. Sir Elton John was a personal favorite of Princess Diana and he adapted his song Candle in the Wind for Diana’s 1997 funeral.

A curator is assigned to the exhibit to oversee the special requirements of the display, such as temperature control.

“[The curator] has a very important job,” said Nick Grossmark, the other half of the Art Handlers. The duo returned to London after setting up the exhibit at the Mall of America and return to the U.S. in September when the display travels to Kentucky. Grossmark and Murton are the only individuals allowed to handle the exhibit’s delicate clothing.

Murton said the exhibit reflects the fun side of Princess Diana, who “wasn’t starchy.”

Another highlight of the exhibit is the Tiara Gallery, displaying both Princess Diana’s personal jewels as well as royal gems.

“All the jewelry is the Spencer jewelry and the tiara is the Royal Crown’s, so hence the high security,” said Murton. “Princess Diana’s sons gave permission to show them. I think Princess Diana would have liked that.”

The Tiara Gallery displays other English jewels as well, including royal jewelry from the 1800s and early 1900s with biographies of the wearers. The Riviere Necklace contains 46 diamonds set in silver and gold. Every single diamond is detachable and a bracelet can be made from part of it.

A five-row natural pearl bracelet is strung to a blue enameled old clasp, set with diamonds and rose diamonds, and is stunningly displayed on a maroon velvet pillow (below). 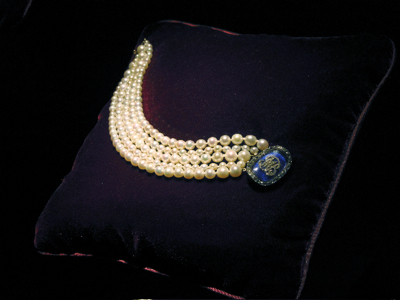 Lady Diana became known for her extensive wardrobe and Diana: a Celebration thrills with a gallery of gowns and dresses. (The Mall of America exhibit shows 27 of Diana’s gowns and dresses; the gown she wore for her dance with actor John Travolta at the White House was recently sold, my tour guide explained.)

Superimposed behind the dress or gown is an image of Lady Diana in the very outfit on display, which is well done and reminiscent of a high quality art exhibit. A 1997 scarlet evening dress and a 1997 silk black evening dress showcase her tall and slim figure.

Along with her Versace and Channel clothes, a stark contrast of a Giorgio Armani and Ralph Lauren designed shirt and trousers with a protective vest and visor for walking around land mines is a reminder of Lady Diana’s humanitarian work.

It’s unusual for a member of the English royal family to walk through something as dangerous as land mines to call attention to a cause, said Murton. “Lady Diana was very brave.” 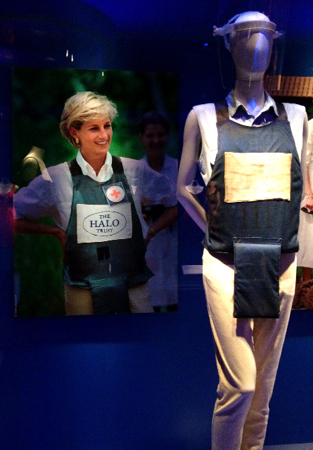 (Above) An Armani and Lauren designed shirt, trousers, protective vest and visor for walking in mine fields contrasts with Lady Diana’s evening gowns and appearance dresses.

At the end of the exhibit, I thought I entered a gallery containing Lady Diana’s library. A wall-to-ceiling case of books lined the wall. Not a library greeted me, but books of condolences to Lady Diana’s family after her death in a Paris car accident when she was 36. I was astounded at the collection of tributes from around the world and impressed by the care and attention given to this part of the exhibition. A separate book on a podium invites visitors to sign and share their thoughts.

A gift shop as you exit resembles a visit to an English shoppe and many unique “royal” items can be purchased.

Proceeds from the exhibit go to the Diana, Princess of Wales Memorial Fund, according to the exhibition’s website.

Diana: A Celebration continues though June 10. Information on hours and ticket prices can be found here or by calling the Mall of America at 952-883-8800. 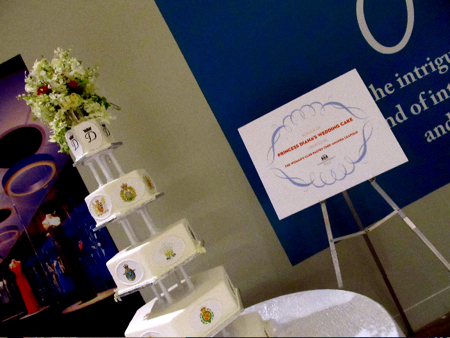 (Above) A replica of Princess Diana’s wedding cake.

(Above) A royal beefeater greeted media at the press preview night. 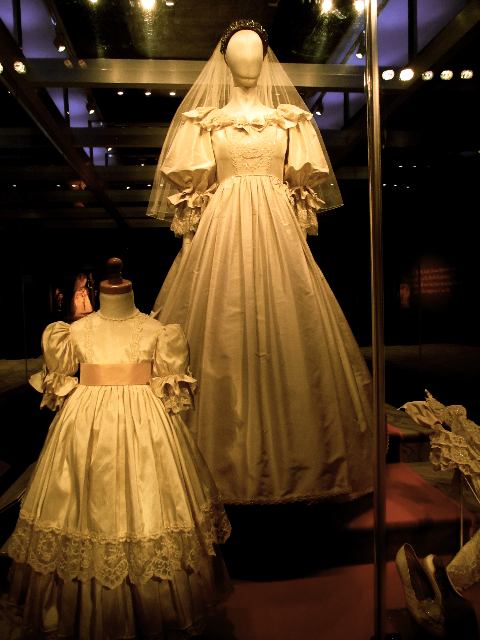 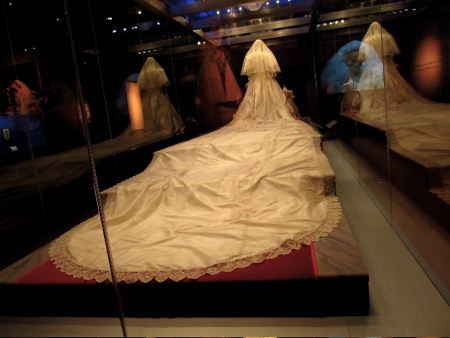 (Above) The royal wedding gown’s 25-foot train is displayed in the mall’s ample space. The train can’t be fully extended in its permanent London home. 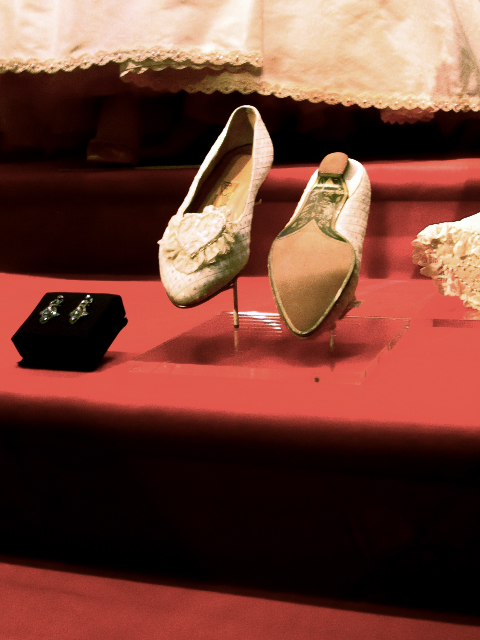 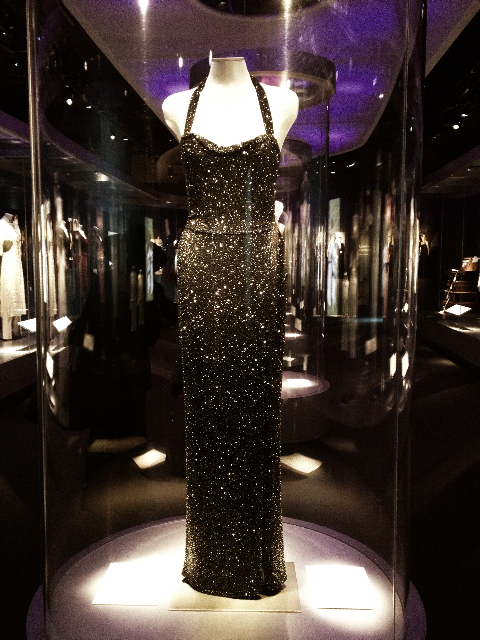 (Above) This 1997 Jacques Azagury graphite black evening dress was worn by Princess Diana at the Ritz Hotel to celebrate Sir James Goldsmith’s election as a Euro MP. There are 27 gowns and dresses on display. 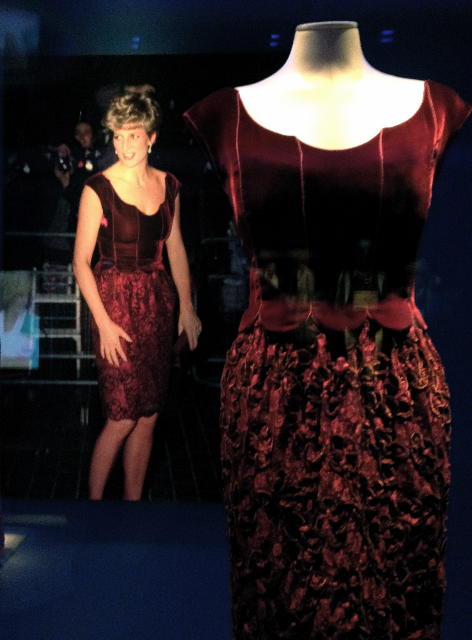 (Above) Valentino designed this burgandy cocktail dress worn by Princess Diana to a Hong Kong gala in London in 1992. The exhibit superimposes images of Diana in the dress or gown displayed. 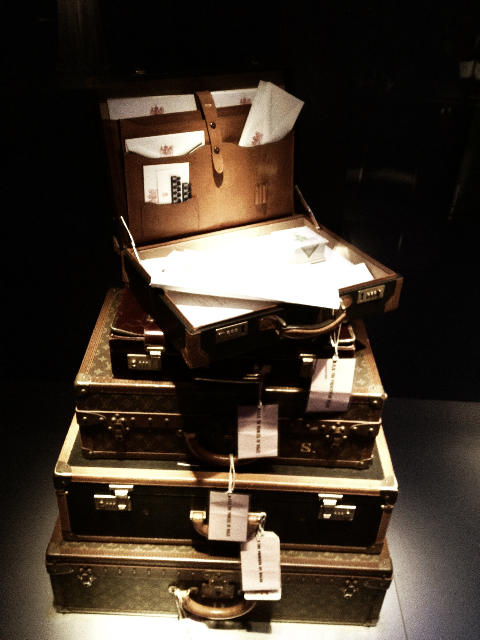 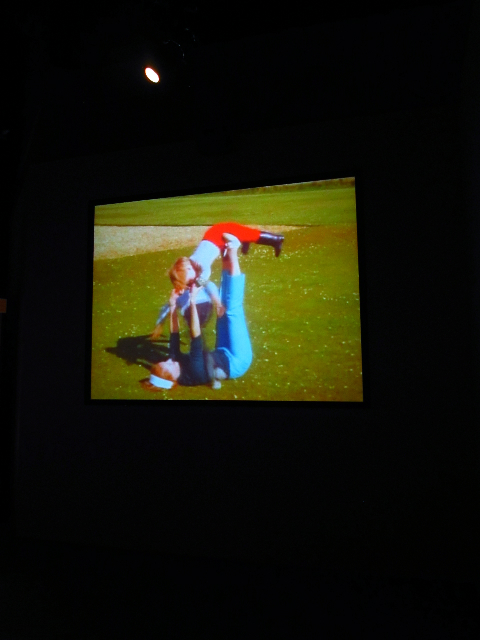 (Above) Diana was born in 1961 and childhood images and movies run throughout the galleries. Here Lady Diana plays with her mother. 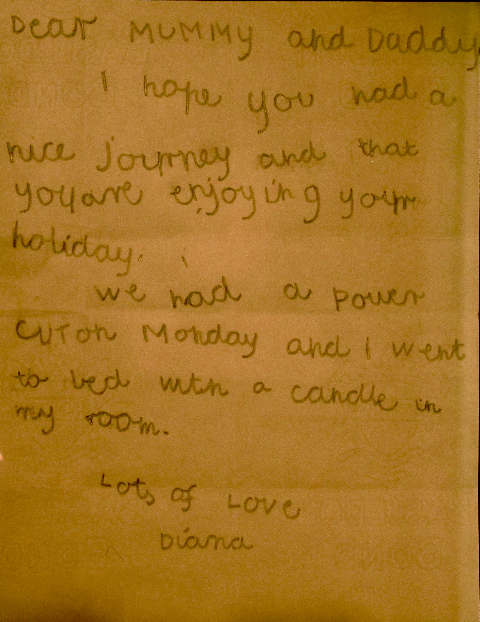 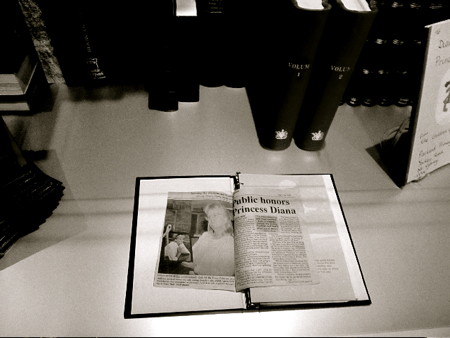 (Above) One of the galleries is devoted to the outpouring of condolences from around the world. 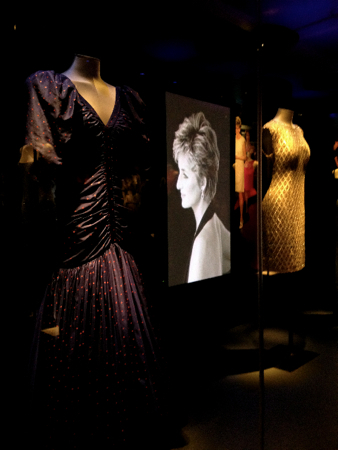 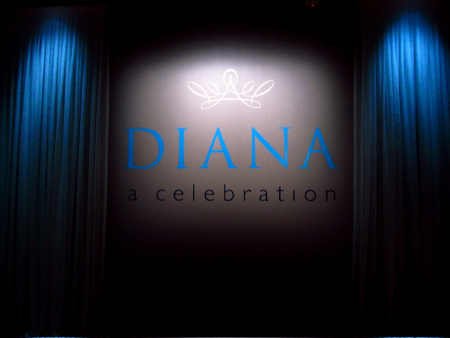