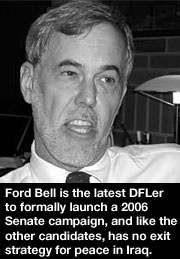 U.S. Congressman John Murtha, a hawkish Democrat from Pennsylvania, has called for immediate withdrawal of American troops from Iraq. Murtha, a decorated Marine veteran and widely acknowledged expert on military issues, believes a withdrawal could be accomplished within six months.

Pulse spoke to all three DFL U.S. Senate candidates: Ford Bell, Patty Wetterling and Amy Klobuchar, to get their reaction to Murtha’s stand. None of them are ready to endorse Murtha’s proposal. On Oct. 1, Wetterling called for the withdrawal of U.S. troops by Thanksgiving 2006.

Bell, a prominent activist in nonprofit organizations, said he was thrilled to hear Murtha’s position because of his credibility on military issues. Bell thinks we need to take the advice of military commanders on implementing an exit strategy.

Hennepin County Attorney Klobuchar seemed the most restrained in setting a U.S. withdrawal deadline. When asked if they could be withdrawn before the next Congress convenes in 2007, she was uncommitted, saying she doesn’t think we could withdraw the reservists within the next year.

None of these DFL candidates seem ready to embrace the mantle of former Minnesota Senator Eugene McCarthy. In 1968, McCarthy opposed the Democratic Party leadership to call for the withdrawal of U.S. troops from Vietnam. While Bush led us into this war, a majority of Senate Democrats voted for the war resolution. Former President Bill Clinton and U.S. Senator Hillary Clinton are opposed to setting an exit strategy. While Democratic senators have defended Murtha’s patriotism, none of them have endorsed his proposal.

Murtha believes that the very presence of U.S. troop is inciting the insurgency. He said insurgent incidents have increased from about 150 a week to more than 700 a week in the past year.

Retired Army Lt. General William Odom said recently on the PBS News Hour that we are caught in a civil war that the Shiites are going to win. Odom says it’s impossible to quickly train Iraqi security forces. “They are more loyal to militias than any regime,” he said.

Also last week The Nation wrote “we will not support any candidate that does not make a speedy end to the American War a major issue of his or her campaign.”

Bell said the medical infrastructure in Iraq has been destroyed along with power for lights and safe drinking water.

On Monday this week Iraqi political factions called for a timetable for withdrawal of foreign forces. The announcement was made in Cairo by 100 Suni, Shiite and Kurdish leaders.