Brooklyn Park is the second most diverse city in Minnesota but one would not know it by looking at its elected officials.

In the history of the city, which was incorporated in 1969, Brooklyn Park has never had a non-white council member or mayor. Joy Marsh Stevens is looking to change all of that as she seeks to become the city’s next Mayor. And with the endorsements rolling in, March Stevens, who is African-American, is primed to make history.

Marsh Stevens said it is time for things to change in Brooklyn Park.

“The leadership (in Brooklyn Park) is not truly invested in the city,” said Marsh Stevens. “And it has also not recognized the changing demographics in our community and given equal access to true opportunity.”

The city’s diversity is relatively new. In 2000, according to the U.S. Census, the population of Brooklyn Park was a bit more than 70 percent white with just more than 14 percent African-American. Just 10 years later the population shifted to 52 percent white and 24 percent African-American. Today it’s estimated that the non-white population of this city has overtaken this city’s white population. The northern suburb of Minneapolis has also seen significant increases in the Asian and Somali communities as well. 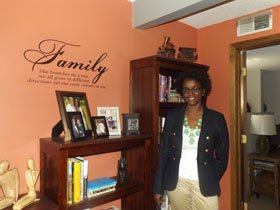 Marsh Stevens said the changing demographics of Brooklyn Park are one of the things that excites her about the possibility of becoming the city’s next mayor.

“I think Brooklyn Park is one of the best cities in Minnesota,” said Marsh Stevens, who is a graduate of the University of Minnesota with both a bachelors and masters from the university. “We have the greatest diversity in the entire state and we have the ability to be a North Star city. We can be the example of how you can live and thrive as a multiracial community.”

Marsh Stevens said a priority as mayor would be to bring jobs and commercial industry to the suburb. According to the candidate, Brooklyn Park has one of the highest rates of unemployment in the region. She said Target had promised to bring jobs to the city in exchange for concessions with one of its outlets but the current administration allowed the retailer to renege on its initial promise.

“When it came time to hold Target accountable the city allowed Target to renegotiate its deal,” said Marsh Stevens. “I, along with other concerned individuals as private citizens, had to open talks with Target to make sure Target lives up to its end of the deal.”

The primary for the Brooklyn Park mayoral race is Aug. 5.