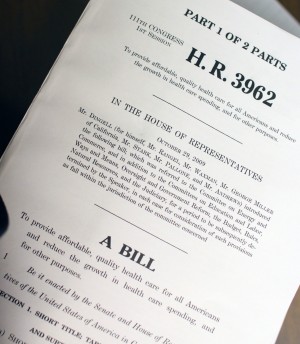 The rate of uninsured residents in Minnesota’s eight congressional districts is a good predictor of how U.S. House lawmakers voted on health care reform. But, according to data in a new report by the Urban Institute and the Robert Wood Johnson Foundation, there’s one glaring exception: Blue Dog Democrat Collin Peterson who represents the 7th Congressional District.

The study, which compiled data from the 2008 American Community Survey for each congressional district in the nation, found that Peterson’s district, which spans much of western Minnesota, has one of the highest rates of uninsured residents in Minnesota. Peterson voted against the House health reform package.

On average, 9.8 percent of Minnesotans are uninsured, but in Peterson’s district, the rate is 11.3 percent of people – the third highest rate in the state. Only the 5th and 8th districts had higher rates of uninsured, the former encompassing the highest population density in the state, Minneapolis and surrounding suburbs, and the latter containing the economically ravaged Iron Range.

Minnesota Republicans who voted against the health reform bill in the House have the lowest uninsured rates among their constituents. The districts represented by John Kline and Erik Paulsen are ranked 14th and 17th out of 435 congressional districts in terms of lowest rate of uninsured residents. Michele Bachmann‘s district comes in at 22nd.

Opposition to health care reform in those districts stems from the fact that a vast majority of people have private health insurance coverage. Nearly 88 percent of 2nd Congressional District residents, represented by Kine, have private insurance; in the 3rd Congressional District, represented by Paulsen, it’s 86.1 percent; and in Bachmann’s 6th Congressional District, it’s 85.8 percent. That contrasts with only 68.5 percent of residents having private insurance in Ellison’s district. In fact, Kline’s district has the 6th highest rate of private health insurance coverage in the nation. Paulsen’s and Bachmann’s come in at 14th and 15th.

The rhetoric put out by Minnesota’s Republicans, especially Kline and Bachmann, on the health care bill leaves the impression that those residents will lose the private insurance they currently enjoy – an effective strategy in districts where almost 9 in 10 residents have private insurance – even if that impression isn’t well supported by the facts.

Bachmann said: “[The health care bill] says specifically that people can’t purchase private health insurance after a certain date, which means people will ultimately go into a single-payer plan where it is government providing health care and only one single government system.”

Though that statement was ruled “false” by Politifact, it does play to the fears of the vast majority of residents in her district who enjoy private health insurance.

Kline was less bold in his assertion that private insurance would disappear under the health reform plan. Kline said: “Some of the ideas to reform insurance systems being discussed could have the effect of driving people out of the voluntary, private employer-based health care system, make them more reliant on government programs and subsidies, and could ultimately lead to the nationalization of health care in America.”

DFLers, with the exception of Peterson, voted for the health reform bill, and their districts have the highest number of residents who are either uninsured or have government subsidized insurance. Ellison’s district had the highest uninsured rate, 14.8 percent, and the highest subsidized insurance rate, 19 percent. James Oberstar‘s 8th Congressional District was right behind Ellison’s at 12.2 percent and 18.4 percent. Betty McCollum‘s 4th Congressional District had a public health insurance rate of 14.9 percent and an uninsured rate of 10.6 percent.

Among DFLers, only Tim Walz‘s 1st Congressional District in southern Minnesota had lower public insurance and uninsured rates than the state average (but still much higher than in Republican districts), with 12.1 percent and 8.9 percent.

Here’s the full breakdown of insurance rates by district: