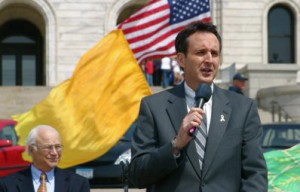 Gov. Pawlenty at the National Day of Prayer event in 2008. Photo: Governor's Office

Despite a ruling last week by a federal judge in Wisconsin striking down the National Day of Pray as unconstitutional, Minnesota’s commemoration of the annual event — almost exclusively an evangelical affair — will go on this year. It remains to be seen whether Gov. Tim Pawlenty will again sign a proclamation for the day in Minnesota.

On Thursday U.S. District Judge Barbara Crabb ruled that the National Day of Prayer, enacted by Congress in 1952 at the urging of evangelist Billy Graham and strengthened by President Reagan in 1988, violates the constitutional separation of church and state.

The day “serves no purpose but to encourage a religious exercise, making it difficult for a reasonable observer to see the statute as anything other than a religious endorsement,” Crabb wrote. She added that prayer is a very important part of people’s lives but that “recognizing the importance of prayer to many people does not mean that the government may enact a statute in support of it, any more than the government may encourage citizens to fast during the month of Ramadan, attend a synagogue, purify themselves in a sweat lodge or practice rune magic.”

Most Minnesota governors have endorsed the day each year with a proclamation — with the exception of Gov. Jesse Ventura, who refused to sign one. “I believe in the separation of church and state,” he said at the time. “We all have our own religious beliefs. There are people out there who are atheists, who don’t believe at all… They are all citizens of Minnesota and I have to respect that.”

But Pawlenty, an evangelical Christian, has been loyal to the exclusively evangelical event, and has appeared at several day of prayer events during his term in office, as has Lt. Gov. Carol Molnau, also an evangelical.

Pawlenty’s office did not return a request for comment on how the court ruling might affect his support for this year’s event.

In recent years, only evangelicals were invited to speak at the event, which is part of Shirley Dobson’s — and Focus on the Family’s — plan for the nationwide events. In fact, Sharon Auldrich, Minnesota coordinator for the National Day of Prayer, was hand-picked by Dobson.

Auldrich said that this year’s event at the Capitol on May 6 will only be “strengthened” by the court decision.

“This ruling will continue the process of refining and drawing out those who believe faith in God is vital and will encourage them to stand strong on Biblical principals,” she said. “We are commanded to pray for our country and those in authority.”

She added, “God uses for good what the enemy has planned to use to destroy.”

She said the court decision will be test for Christians, including President Obama. “What this does is draw a line in the sand, and those who say they believe in God and say they have biblical values will have to step forward and prove it,” said Auldrich. “The request for President Obama to appeal [the decision] is going to be a very interesting test for him.”

This year’s event will take an even different flavor when the National Day of Prayer observance at the Capitol teams up with the Minnesota Family Council for a prayer in the Capitol Rotunda following the event on the Capitol lawn. MFC bills its rally against rights for same-sex couples as “a call for believers throughout the state to join together in a united voice against the assault on God’s design for marriage.”