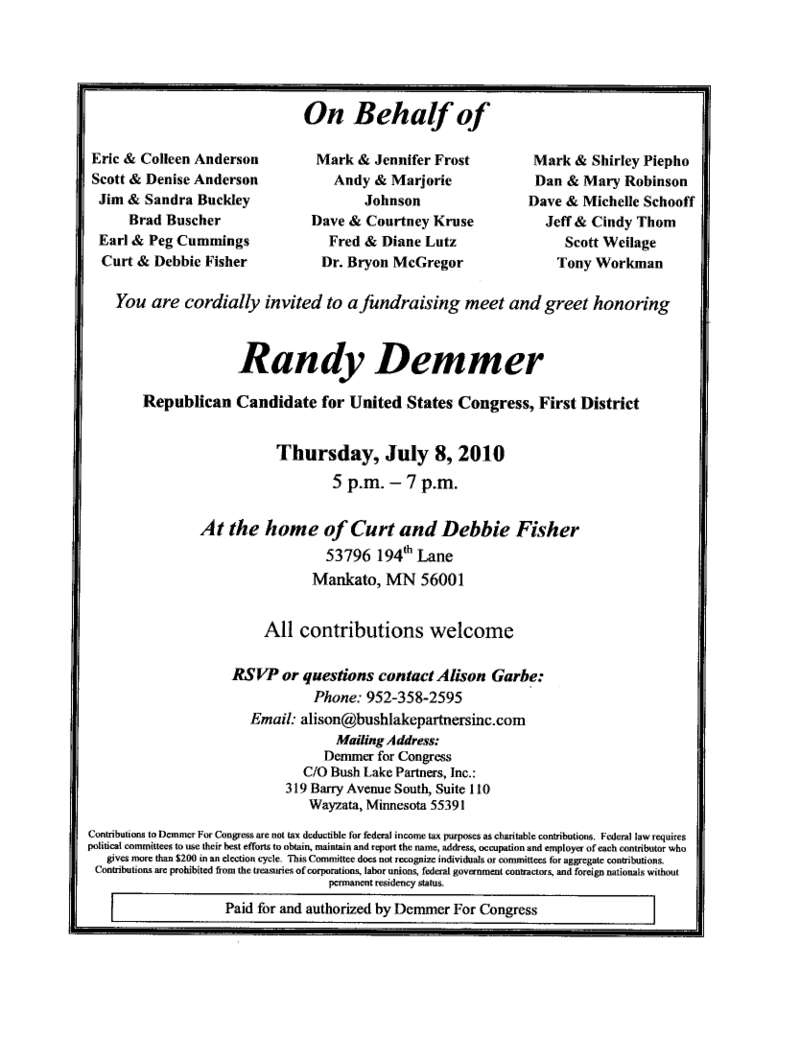 One thing I’ve noticed in reading Randy Demmer’s FEC reports is the heavy reliance on consultants from outside of the First Congressional District—while Walz’s staff tend to live in the district. Perhaps the GOP bench of energetic talent in Southern Minnesota simply isn’t strong enough to mount a winning campaign.

It may be that the choice of Washington uber-lobbyist Vin Weber is a tacit admission of this problem. The DFL noted in a recent press release:

“Rep. Randy Demmer has been in politics for 19 years and just like a typical politician, Randy Demmer chose a Washington insider to chair his campaign” said DFL spokesperson Donald McFarland. “Tim Walz looked to local folks like Jerry and Kathleen Maschka in Mankato to chair his campaign. Southern Minnesota wants true leadership – not someone courting Republican operatives.”

Demmer’s hires are a far cry from the rag-tag team of young people who helped Walz score his upset victory in 2006. While Walz hired a campaign manager from the East Coast, the other key campaign staff were local young people, as the Mankato Free Press reported:

Before Walz was finished making his victory speech, he was surrounded on the stage by the people who’d been crucial in painstakingly creating the momentum that eventually resulted in that surreal scene on election night.

“By the way,” Walz said, looking around at his key campaign staff, “the average age is about 23 up here.”

Walz’s current campaign manager, Richard Carlbom, also knows the power of youth: in 2005, he was elected mayor of St. Joseph, Minnesota, when he was himself 23 years old.

Perhaps some day the rest of Minnesota will accord the same respect for the power of young adults to shape the state’s political direction.

Demmer is going with old hands and it shows. Perhaps it’s fitting, as Demmer, recently named as a “Young Gun” contender by the NRCC, is the older man in the race.

One telling detail of the remote control plaguing the Demmer campaign? The images on this page of a recent fundraiser in Mankato for Demmer direct contributors to send their money to Bush Lake Partners in Wayzata, a tony western suburb. Check the image above to see the address more clearly.

Another interesting bit on the fundraising piece shows that math is still hard for the Demmer campaign. As the smaller image below shows, the campaign seems rather confused about contribution limits.

Whoever put the invitation together listed the maximum individual contribution per election cycle, including the primary, as $9,600 per individual, with $4,800 allocated for the primary, and $4,800 for the general.

While it might be nice to have friends who can throw that kind of money around, the FEC actually allows only half that amount to be contributed–it’s $2,400 for the primary and $2,400 for the general.  There’s even a nifty little chart  on the FEC’s FAQ page. All that Demmer’s Wayzata-based fundraisers need do is follow this link.

From blinking loans to poor record maintenance, the Demmer campaign soldiers on into bookkeeping hell.  So it goes–and as Margaret Anderson Kelliher’s second ad and Wonkette suggest, bags o’ money might be the enduring image of this election cycle. By telling his supporters each to contribute twice as much as the law allows, Randy Demmer is doing his bit to keep the meme vibrant.