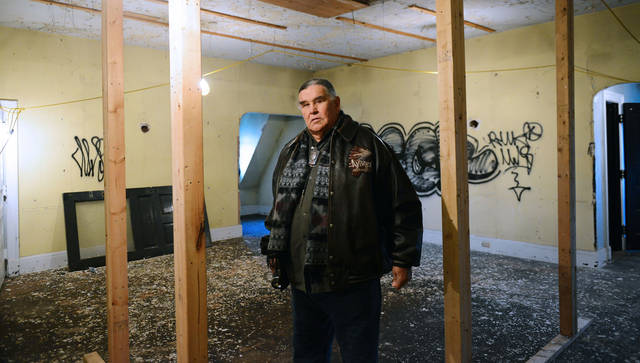 American Indian Movement Director and co-founder Clyde Bellecourt poses in the 6,444-square-foot Henry B. Frey Mansion on Tuesday. The organization is selling the mansion to raise funds to build a cultural center. (Photo by Holly Peterson)

Two century-old houses near the University of Minnesota are set to be the next pieces of the campus apartment boom.

The Minneapolis Planning Commission approved a land-use application Nov. 12 to rehabilitate the Frey Mansion and an adjacent triplex known as the Hoy House into nine total apartment units with 23 bedrooms.

Roman Gadaskin, a landlord near the University for 13 years, signed a letter of intent to purchase the property from the American Indian Movement, a Minneapolis-based Native American rights group that bought the property for about $250,000 in the mid-1980s.

Gadaskin said he considered buying the properties on Fifth Street Southeast and 12th Avenue Southeast five years ago, but passed at the time.

The American Indian Movement used to use the Frey Mansion as a library and office for the neighboring Heart of the Earth School, Director and co-founder Clyde Bellecourt said.

He hopes to fetch between $500,000 and $900,000 and close the sale by the end of December. He said the list price isn’t higher because the buildings need an estimated $3 million in restoration.

“That’s some good news for us,” he said. “That means the guy is interested in putting some student housing in there.”

Inside, the mansion is completely barren and unfurnished. Neither house has been used since the early ’90s, Bellecourt said. But broken windows and graffiti reveal a history beyond the Native American group. Bellecourt said a homeless couple once had a baby in the Frey Mansion.

To maintain the buildings’ character, the outer facades will not change except for minor repairs and new windows, said project architect Karen Gjerstad, who often works in coordination with Design for Preservation, a company specializing in housing restoration.

Gjerstad said she wants to completely redo the interior of the mansion. Despite lacking electricity and plumbing, she said, they plan to open the building by fall 2014, pending city approval.

The city considers the Frey Mansion and the Hoy House “historic resources,” which means they have no official historic designation but are eligible for it.

Originally, the American Indian Movement planned to refurbish the Frey Mansion and operate it as a cultural center. But facing minimal parking and high renovation costs, Bellecourt said they decided to move the planned center to East Franklin Avenue. He said he expects the new center to cost millions and hopes to open it in two or three years.

The American Indian Movement sold the parcel where 412 Lofts stand today to Doran Companies in September 2010 for nearly $2.2 million, according to Hennepin County property records.

“No doubt the area is expensive property right now,” he said. “We are looking to get as much as we possibly can for it so we can build [our] center.”

No one has appealed the Planning Commission’s decision, so the proposed project can move forward without a public hearing. The next step is city approval. Gadaskin said city planners may have other reservations about the project or could request an addition to the plan that he couldn’t afford, but he was fairly certain the project would go through.

“It’s a long process,” he said. “I don’t look at the probability; I look at what needs to be done on a daily basis.”

Minneapolis city planner Aaron Hanauer said his department endorsed the proposal and called it a positive for the area.

“We are happy to see the buildings are going to be rehabbed and that residential character retained,” he said.

The city has seen a surge of new apartment complexes. A block away, a combined 466 units will open in two buildings next fall. Gadaskin said he’s concerned about the high level of competition he’ll face for student renters.