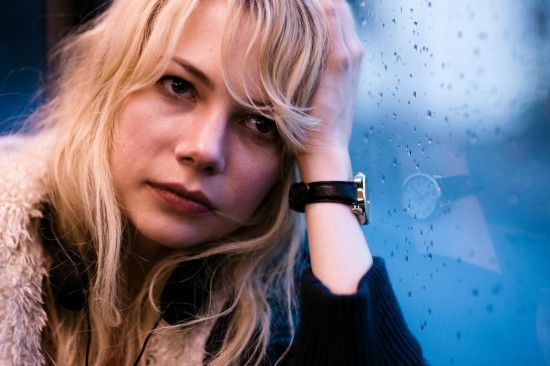 After waiting months to get its Twin Cities release, Blue Valentine finally opens this Friday at a few local theaters (Lagoon, Eden Prairie, Showplace Icon, Southdale) and you should rush to one of these theaters to see it…unless you’ve recently had a bad breakup. In the press notes, co-writer/director Derek Cianfrance was asked, “What was your inspiration for the film?” and his response was nothing short of bleak: “When I was a child I had two nightmares, nuclear war and my parents’ divorce. This film confronts the second fear.”

Cianfrance’s story works so well in large part due to outstanding performances from Ryan Gosling and Michelle Williams, playing Dean and Cindy as they have one night together to try to save their failing marriage. Told through flashback memories and their current rough waters, Gosling and Williams one minute will make you fall in love with them, while the next they rip your heart out. It doesn’t make things any easier that they have a young daughter (terrifically played by newcomer Faith Wladyka) and as there is more to the story of their daughter, you can’t help but want everything to work out for the entire family, even with certain doom right around the corner.

Blue Valentine was recently under the gun by the MPAA, which slapped the film with the dreaded NC-17 rating; for nothing more than a brief strong sexual situation, that was beyond ridiculous. The moment may push the boundaries of a sexual situation on film a little, but there is tenderness in the scene and it’s relevant to the film. Even though you can go a theater just about any weekend, and see heads lopped off, gratuitous violence, and non-stop swearing from nasty villains, many of those violent movies easily get by with an “R” rating. When the distributor, The Weinstein Company, brought the film back to the MPAA to get the NC-17 rating overturned, I don’t think too many were surprised by the ruling to give the film the correct rating of “R” and with this wrong turned right, it would be nice to see the MPAA learn from this mistake.

It isn’t easy watching Blue Valentine, but it feels refreshing and rewarding to be given a story that has so much passion, genuine concern, and beautiful moments, and that’s why it was a no-brainer to name it my number one film of 2010. I hope Blue Valentine finds an audience in the Twin Cities and across the country, so everyone can see how amazing these performances of Williams and Gosling are; it would be great for Academy members to remember these performances as they are voting this month. After seeing the movie at Sundance last January, I wanted to congratulate them (including Cianfrance), for achieving something very few movies have every done in my life: it made me weep. Thankfully, after the movie was over, I could move on with my life, but I’ll never forget that moment sitting in my seat as the credits rolled.