The "loper" crawls across the floor of the Center for Distributed Robotics lab Friday in Wilson Library. The loper was designed to travel over large obstacles and has the ability to ascend and descend stairs with ease. (Photos by Satchell Mische-Richter)

Studies into hypersonic spacecraft arrivals, cancer and even the production of scouting robots thrive on the University of Minnesota campus.

What sounds like a tasting platter of University research is connected by a shared source: the United States Department of Defense.

DOD funding for grants and contracts at the University has doubled from last year to $17.4 million. Despite the increase, some within the University, and a defense industry interest group, have called for the land-grant school to be more open to DOD funding opportunities.

The DOD has an $80 billion research budget annually, some of which goes to studies at universities in hopes that they could lead to innovations in national defense.

“We’re trying to be more open to these opportunities than we have in the past,” said Tim Mulcahy, the University’s vice president for research.

Defense Alliance of Minnesota, a defense industry network, has given University researchers advice on marketing their work to the DOD and networking with private businesses to get joint grants.

“If there’s research DOD is interested in sponsoring that the University is capable of doing,” Mulcahy said, “we have faculty, we have the interest, we have the facilities.”

The College of Science and Engineering’s Center for Distributed Robotics created robots that transform into helicopters, tumble over rough terrain with special arms and swim to collect water samples at the bottom of lakes and streams.

Some of these robots can be controlled by Nintendo Wii remotes. CDR also created scouting robots at the University to save soldiers’ lives in Iraq and Afghanistan, said Nikolaos Papanikolopoulos, the project’s lead researcher.

About 4,000 of the robots are deployed through the Army and law enforcement across the country. The machines, slightly larger than a soda can and equipped with wheels on each end and a camera in between, can be tossed several yards and land without sustaining damage before rolling away to survey the area.

“Imagine you have a hostage situation. Instead of having to go by yourself, you can throw in a robot,” said Duc Fehr, a graduate student at CDR.

This is an example of how the University has used DOD funding.

National rankings often place the University high on the list for research funding, but not for grants from the military.

In 2009, the National Science Foundation ranked the University eighth among public schools for science and engineering research expenditures.

But in a highly-competitive DOD grant award environment, the University drops to 46th.

The school has netted nearly $770 million in grants and contracts this year, according to an announcement from the Office of the Vice President for Research on Friday. Of that, $17.4 million came from the DOD, OVPR spokesman John Merritt said. That’s an increase from about $9 million last year.

Chip Laingen, executive director of Defense Alliance, said University researchers should “be proactive and market the capabilities of your lab to potential partners in the [DOD] realm.”

He shares advice on the OVPR website and works with University research departments.

The Defense Alliance seeks to expand the defense industry’s presence in the Midwest, and among its nearly 570 members are military contractors like Lockheed Martin, BAE Systems and General Dynamics, Laingen said.

The University has several administrative leaders involved in the alliance, including employees from the OVPR, College of Science and Engineering and the Technological Leadership Institute, Laingen said.

Laingen, a University alumnus and former Navy officer, said he wants “a more cohesive, overall effort” to market the University as a place for the DOD to invest its research dollars. But at this time, the University administration hasn’t actively tried to get more funding from the military, he said.

University President Eric Kaler said the DOD presents good opportunities for the University to get funding. He pointed to the Internet as a DOD-funded project that reached beyond the battlefield.

“There are lots of opportunities for research, that’s initially at a defense-related problem, to have a broad impact on society.” 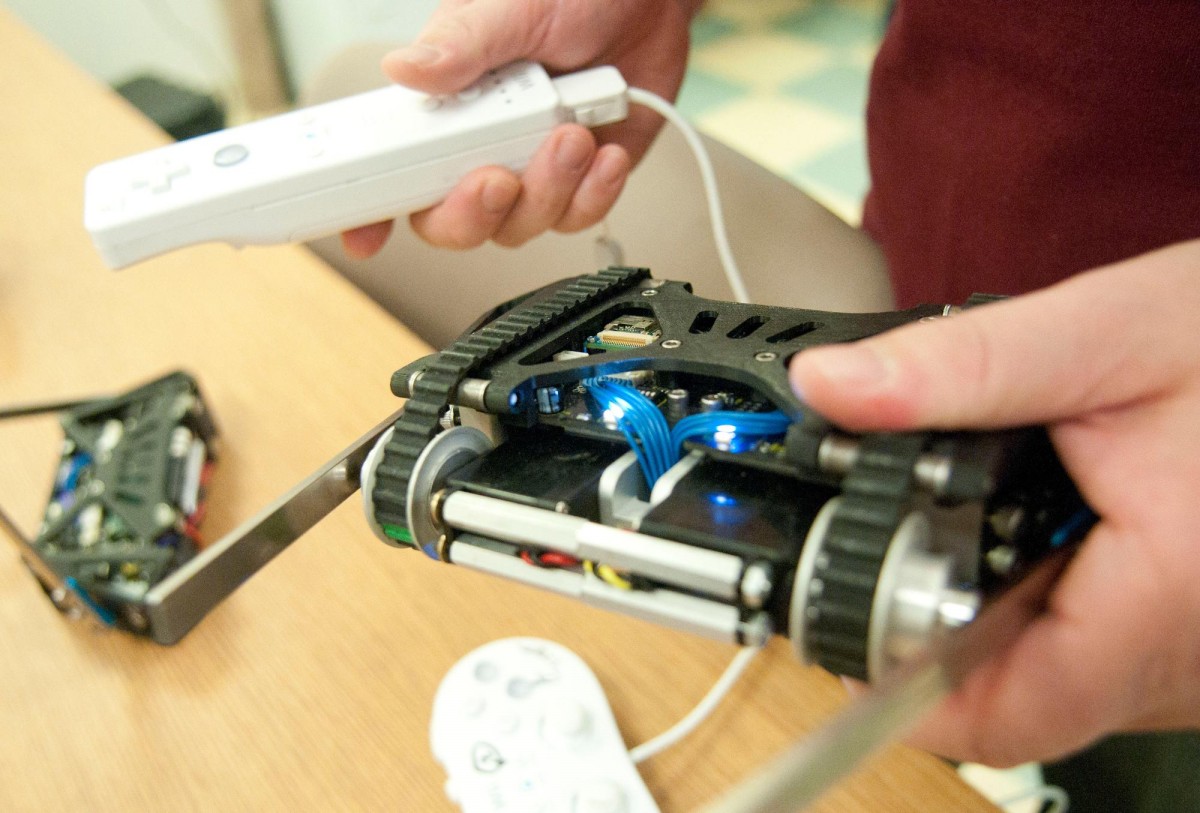 This robot has treads and lever-like arms to help it traverse rough terrain. Many robots at the Center for Distributed Robotics have multiple means of locomotion.

Open research and DOD use

Defense grants are often for dual-purpose projects — the research could benefit the military, but also the general public.

University researchers apply for specific funding opportunities when they are presented by the DOD, and any special requirements attached to the grants are announced up front, Merritt said.

The Pentagon segments its research funding into a number of categories, and most public universities focus on Budget Activity 1 (BA1) grants, which are for basic nonclassified research.

BA1 grants are for research into basic phenomena without a specific product in mind. They include any scientific study related to national security needs.

A BA1 project may have a “farsighted high payoff” that could lead to advanced developments in defense-related technologies and new and improved military capabilities, according to DOD materials.

BA1 grants work well for the University, since the school does not engage in any classified research, Merritt said.

The University’s Openness in Research policy prohibits the school from engaging in classified government research, which limits the kinds of grants departments can apply for.

Because all University research must be publically and freely published, the DOD is usually guaranteed access to the results of the projects it funds, said Mos Kaveh, CSE’s associate dean for research.

Contrary to conventional wisdom, the Pentagon often funds research that could have use outside the warzone.

“When people think of the Defense Department, they think of weapons, but this isn’t everything they fund,” said CSE professor Papanikolopoulos. 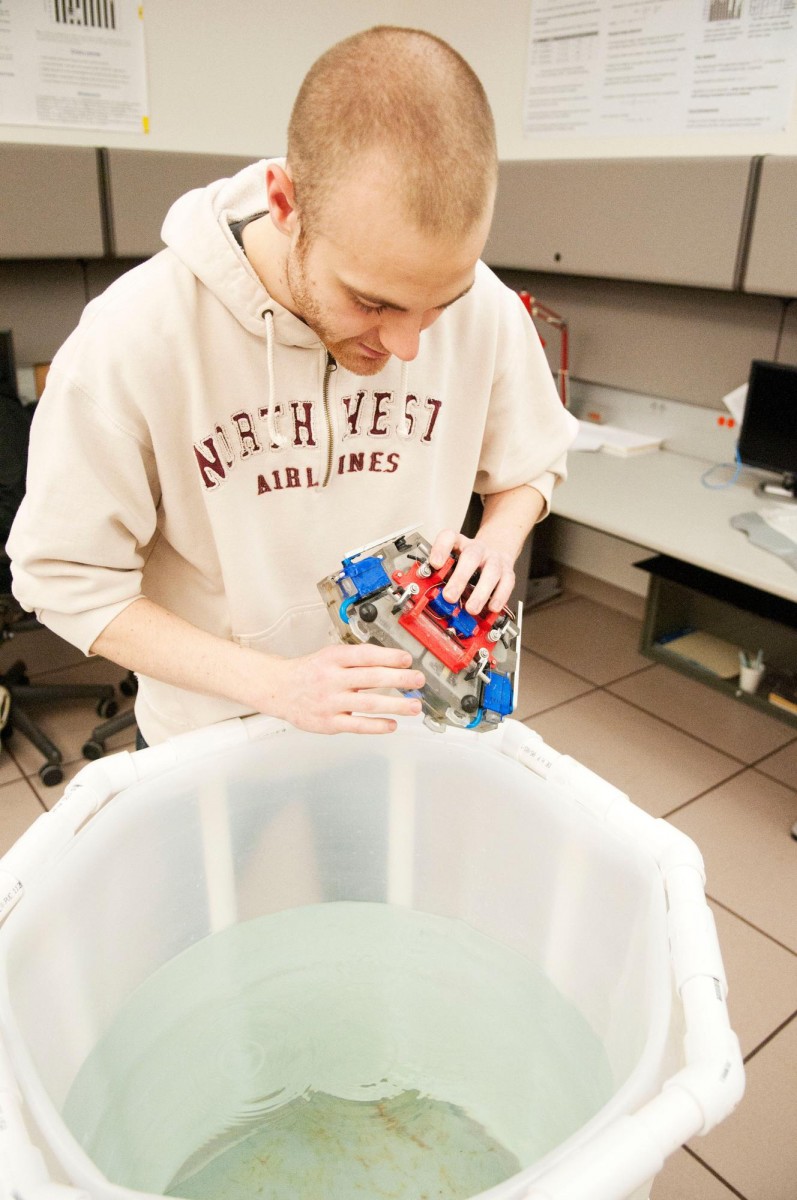 Mechanical engineering graduate student and co-creator of the “aquapod,” Andrew Carlson, displays the submersible at the Center for Distributed Robotics lab Friday in Walter Library. The aquapod can be used to gather water samples.

The DOD backs University research into breast cancer treatments, advanced robotics and obsessive-compulsive disorders. Often, the health-related studies are to help veterans or overseas soldiers with the problems.

But other research has more obvious military applications.

University research led to a license agreement in October for DOD-funded technology that could increase survival rates after traumatic blood loss.

Some of the research isn’t classified, but is “sensitive from a national security point of view,” Mulcahy said.

The University does research with certain biological agents and bacteria that could be used for “nefarious purposes,” but conducts such projects “very carefully” with safety precautions, he said.

The University was among 32 schools that were collectively given about $227 million in funding from the DOD in a 2010 grant blitz.

The University’s share went to its studies into hypersonic flows for spacecraft reentering the atmosphere at CSE’s Aerospace Engineering and Mechanics department.

The military is interested in preventing incidents like the 2003 Columbia shuttle disaster, as well as finding faster ways to launch satellites.

The Navy granted the University’s Center for Transportation Studies $150,000 to look into improving tracking, surveillance and intelligent communications systems.

Studies into the properties and reactions of chemical weapons like VX nerve gas may lead to better ways of detecting toxic substances and cleaning them up, said Chris Cramer, the chemistry professor leading the project.

The Army is interested in how molecules in chemical agents, expended explosives and smoke interact with certain substances to better understand their effects, he said. The studies use computer simulations instead of actual dangerous chemical compounds.

The durable, soda-can sized scouting robots are a good example.

Said Papanikolopoulos, “We get letters from people saying these devices have saved their lives.” 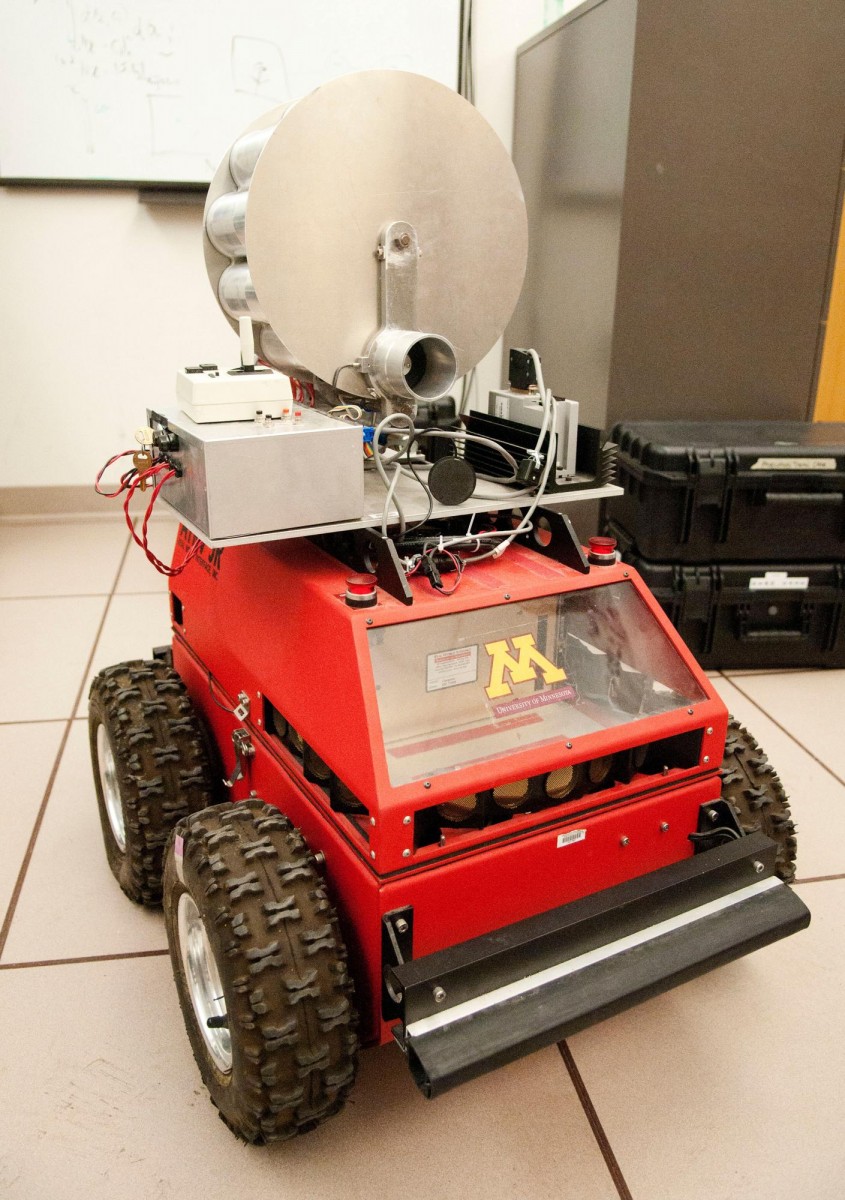 A “scout launcher” sits atop a prefabricated base at the Center for Distributed Robotics lab Friday in Wilson Library. The launcher was designed to deploy small surveillance robots called scouts.

Though the Department of Defense may often fund clandestine or confidential research, the University of Minnesota can’t have any part in it.

Except in the case of “compelling reasons,” the University’s Openness in Research policy doesn’t allow restrictions for when and how the school publishes research for military or commercially funded projects.

Chris Cramer, a Gulf War veteran and University professor, was on the committee that set the University’s open research policy in stone. 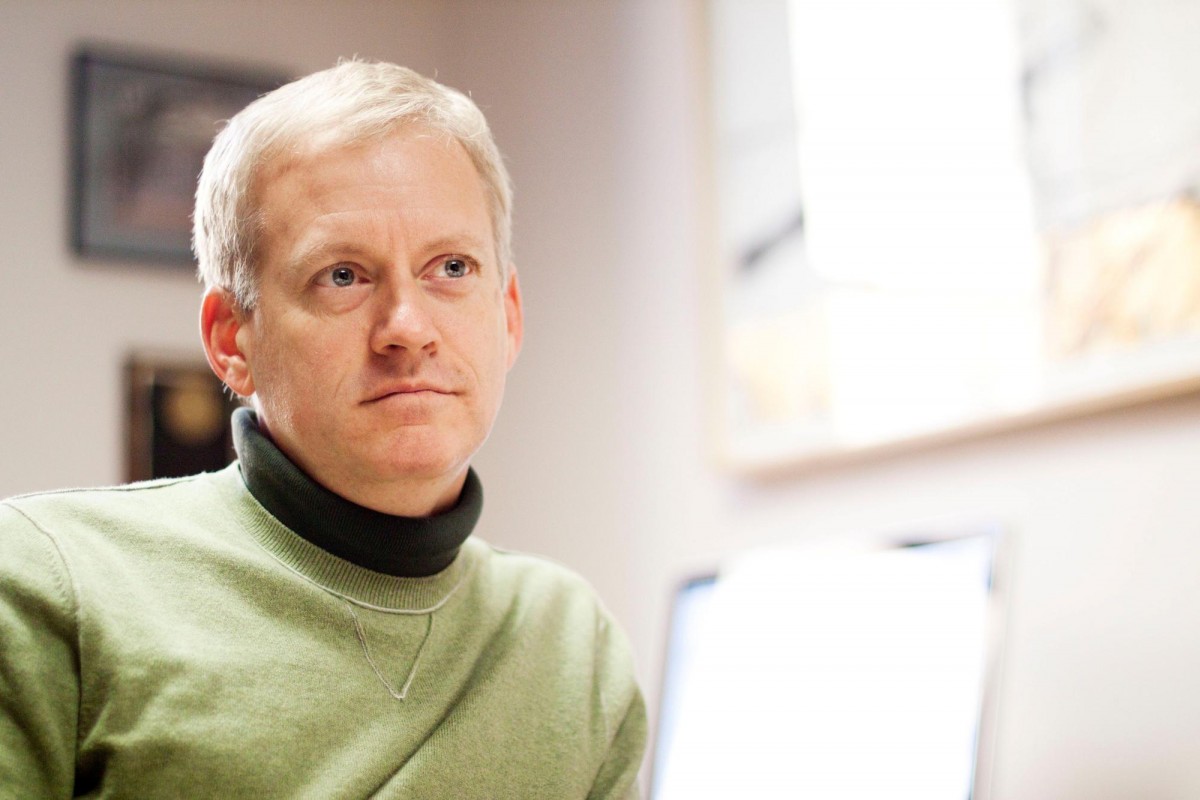 The DOD might require some researchers to submit their work for approval before it can be published.

When that’s the case, the University wouldn’t sign the contract, Cramer said. However, if there was a three-month review of the research required before publication, the University might consider it an exception to the policy.

There are also times the DOD may restrict non-citizens from working on a project, and the University is “very reluctant” to grant that exception, Cramer said, because that would discriminate against researchers.

Only if there was a compelling aspect to the research — like equipping train stations to better detect potential bombs — and the project was very short-term, might the University grant such an exception, he said.

The University said the DOD was trying to “restrict” the open publishing of research results from a military-funded project, according to the Office of the General Council’s 2011 report.

An unidentified “government contracting officer” was violating the DOD’s own policy not to interfere with the University publishing results under its open research rules, the report said, and this led to a contract being lost.

But the report said that overall, the University’s relationship with the DOD and other federal entities was “positive.”

Greta Kaul and James Nord contributed to this report