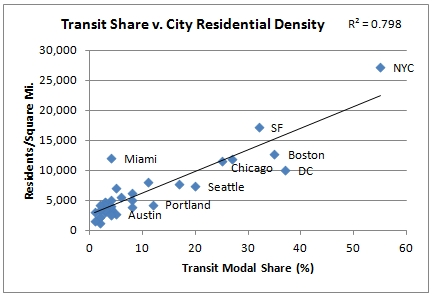 The Old Urbanist has a nice post from last year: Density and Transit: Some Numbers. I steal one of his graphs (above) and quote his words:

“While there are a few transit overachievers, notably Portland, Seattle, Boston and Washington D.C., the correlation is overall very strong. No city with an overall density of less than 4,000 per square mile, and there are many, has broken a 10 percent commuting modal share. The most notable outlier, Miami, may possibly be explained by examining its CBD employment density and job concentration in the charts below. “

Looking at the data for the City of Minneapolis, we are in the terms of the Old Urbanist a “transit underachiever”. That is, we have both a CBD employment density that is above average (5th highest in the US at 146,000 jobs per square mile), and a residential density of 7000 persons per square mile. But we have a underperforming metropolitan area mode share of 4.67%.

In life, there are two basic strategies: Prop up the weak or reward the strong. 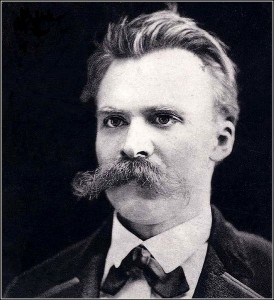 In transit, there are two investment strategies: invest in areas with poor ridership to increase it, or invest in areas with decent ridership to make it even better. From a transit agency financial perspective, the second is clearly better (it is what a private operator would do). From a spatial/political equity (or suburban welfare) perspective, the services get spread around. We get high-capacity service to third-ring suburbs and even exurbs. This would not be a problem but that resources are scarce and our eyes are bigger than our wallets.

In a recent post, I suggested some alternative transit routes, e.g. Rosedale to Southdale, the Purple Line, or Fridley to St. Paul, the Pink Line. There is nothing magical about these proposed routes, and I certainly have no religious feelings about them. (Nor do I own real estate along the rights-of-way).

They just have nice mostly available rights-of-way, key demand points along the routes (large shopping destinations, universities, downtowns) and serve the core cities and first-ring suburbs which have above metropolitan average population densities and thus should be feasible to serve with a higher capacity service that does not get stuck in traffic.