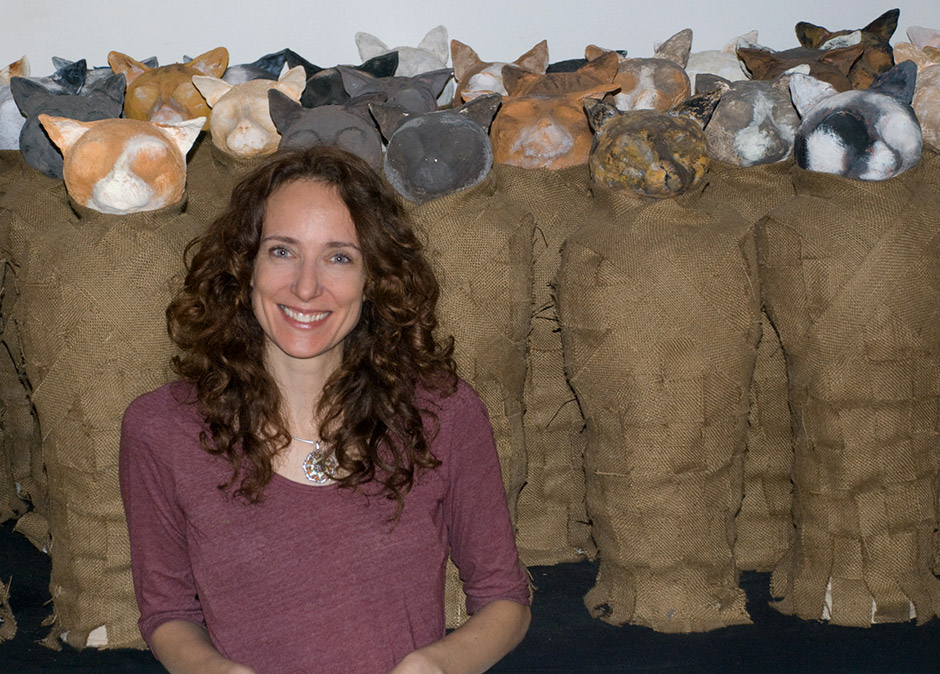 Rouleau with her Terra Gatto Warriors

Denise Rouleau is a Seward artist whose studio is located in the Ivy Building for the Arts. Her latest exhibit is Terra Gatto Warriors of Minnesota – the Cat Warriors. We check in with Rouleau to find out what inspires her art.

MB: Tell us about what sparked the idea for Terra Gatto Warriors.

DR: The cats are actually an offshoot of a series called “Art of the Catacomb” a body of work that I have been creating for several years with Mark Roberts. The framework of the catacombs consists mainly of vintage type-face cases which are disassembled and reworked into unique pieces of architecture to house individually mummy-like figures. I was familiar with the mummy cats in ancient Egypt. I guess I couldn’t resist making a “cat-acomb”. I read a legend about how the ancient Egyptians unleashed thousands of cats to thwart an attack of foreign invaders which terrified the advancing army into a hasty retreat. I thought that we could use our own cat army. I played with the word “gatto” – cat in Italian – which made me think of the terra cotta warriors, bringing me back to my ancient global cat army: Terra Gatto Warriors – Unleash the Cats. 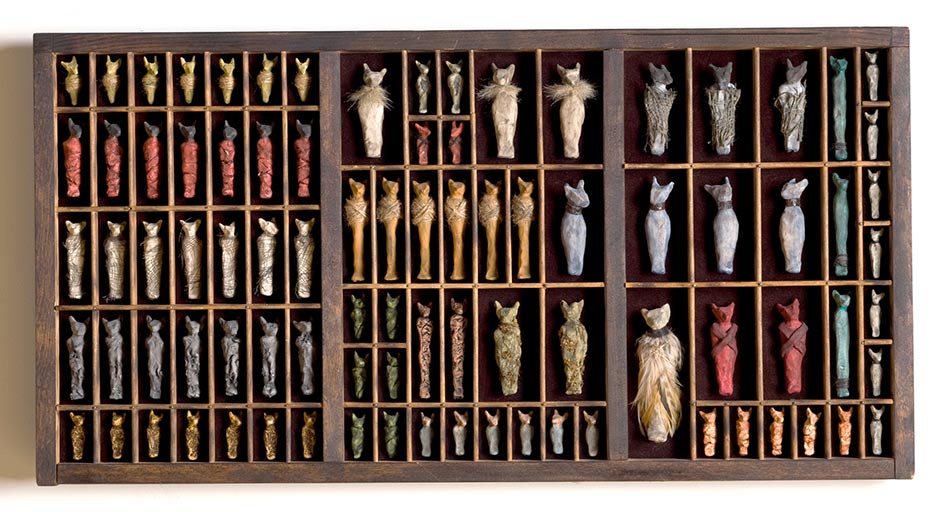 MB: Is this your first foray into sculpture?

DR: I have never studied art formally, but have been creating sculptural things ever since I was little. Whenever there was a project at school, like making a poster or a name card, I would turn it into something three-dimensional, using whatever I could find around the house… Also, my mom is a miniaturist so she was sculpting and creating her mini scenes and people. I was never thought I was interested in making “miniatures” but I can see her influence now. 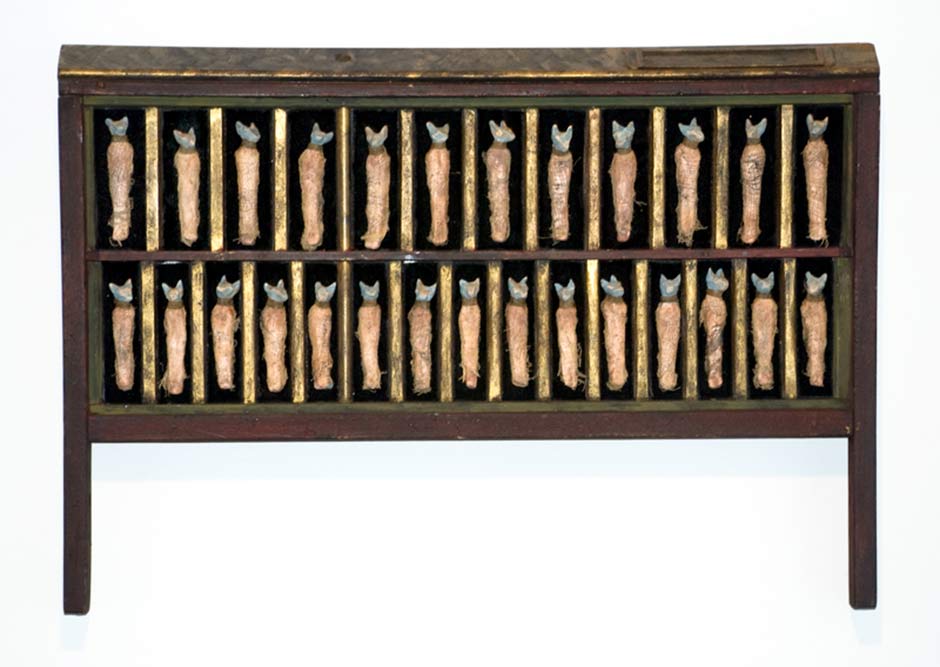 MB: How long did it take to work on your army of 50 cats?

DR: It’s hard to say because there were so many steps in the process. With the planning and research stages it was about a year, but I worked on them seriously for about six months. I remember being surprised by how long it took to create the woven burlap armature. Cutting, weaving, gluing, and sewing the burlap was much more time consuming than I had imagined…and scratchy! I would take a body home each night and sew it in front of the TV.

MB: What other pieces are in the gallery exhibit?

DR: There are around 11 pieces of work in the show. I was fascinated by the mythology and lore surrounding cats around the world from ancient times to the present. I don’t reference one specific idea or legend in a given piece, but incorporate fragments of inspiration. I have the “cat-acomb” pieces – cat mummies that appear to have been unearthed from a dig. There is “Cat-atonic” which is comprises of just cat heads with bits of writing from the Tibetan Book of the Dead on the surface. The “Glitter Kitty Brigade” and the “If it Weren’t for Bad Luck I’d have No Luck at All” were my first experiences working with glitter and flocking powder. When it came to the glitter kitties, calico made me think of camouflage. Then I thought about the colorful uniforms of the past, like all the shiny steel armor –not very subtle – so I decided to glam up some calicos. It’s been fun having people tell me that they found their cat and watching kids even name them. 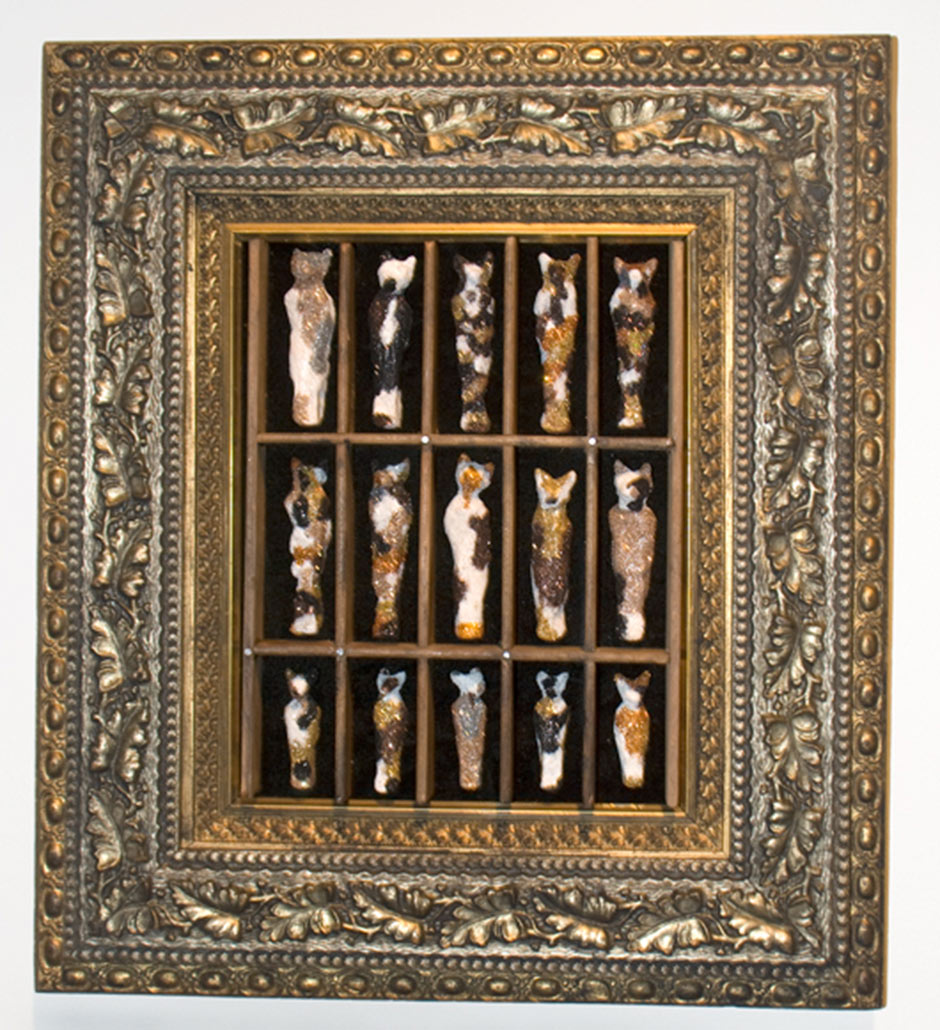 MB: You’ve been to Italy several times to study, and your new exhibit references il gatto. How else have your travels influenced your work?

DR: Living in Europe has probably been the greatest influence on my art. With a lot of work and saving I was fortunate to live abroad before and during college. I remember early on visiting France’s Chartres Cathedral and being overwhelmed and not really seeing or appreciating it. Thankfully the next day my (now) husband and I went back and took the famed tour by Professor Malcolm Miller. He said something that has always stuck with me: “A church is like a library; you cannot expect to read all the books on a single visit, but today we will read a few chapters.” He chose a single rose window, one portal and a row of sculpture. He really went into the details revealing their stories and secrets – the significance of the colors, the numbers, the positions, the objects…. He opened my eyes to a visual language that was created to speak to parishioners who were not able to read sacred texts. He made something overwhelming approachable for me. I could have returned to Chartres every day for a year and discover something new. Since then I have found myself drawn to medieval art and architecture with all the wonderful iconography and allegory. I enjoy making pieces that upon first glance can be a little overwhelming in size or detail, but invite people to look closer and uncover secrets and create stories. 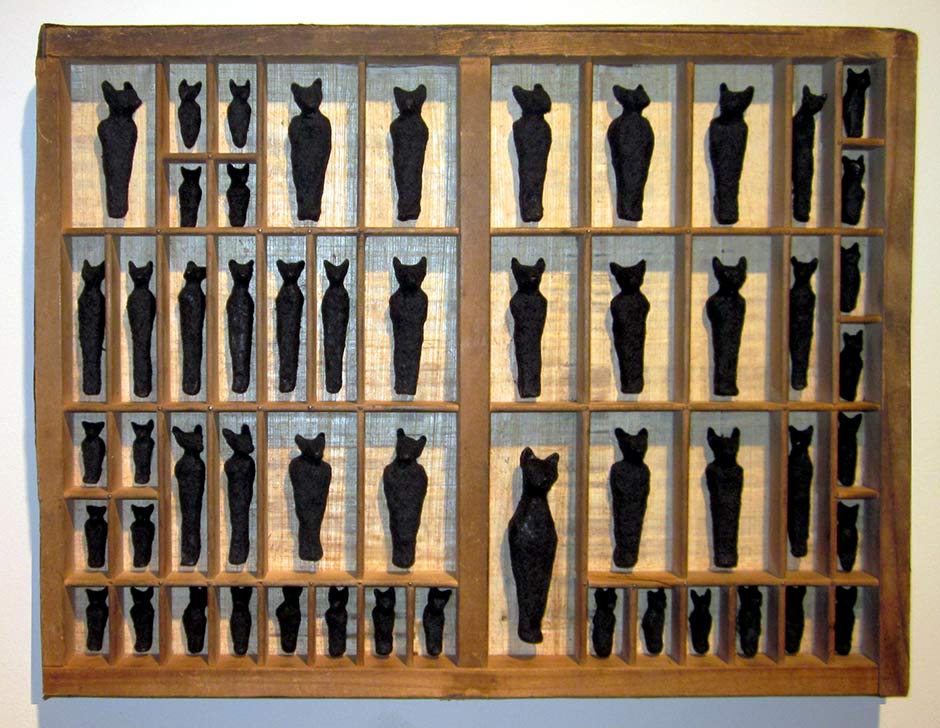 If It Weren’t for Bad Luck, I’d Have No Luck at All

MB: You also do large-scale Polaroids. How did that project begin?

DR: The Last Polaroid Show is another collaboration with Mark. He is a photographer who experiments with some unusual alternative processes that most people, including me, have never heard of. He introduced me to photo manipulation sitting outside in a park one day. I really liked the instant gratification and unpredictability of working with Polaroid SX-70 film. What makes it so unique to work with is that once the Polaroid ejects from the camera the film dyes are like wet paint that can be hand manipulated before they harden, resulting in surreal and impressionistic images. We would then scan the images and have them printed on metallic coated paper in sizes up to four feet square which enhances their luminosity and textural qualities. We were working on series of Como Conservatory when Polaroid stopped making the film. We bought all the packs we could find so we would have enough for our exhibition. I was very sad to see this art form disappear. A company in Holland called the Impossible Project has tried to resurrect the film, but the quality /manipulation factor is just not the same. It’s just one of a series of casualties of the digital age. 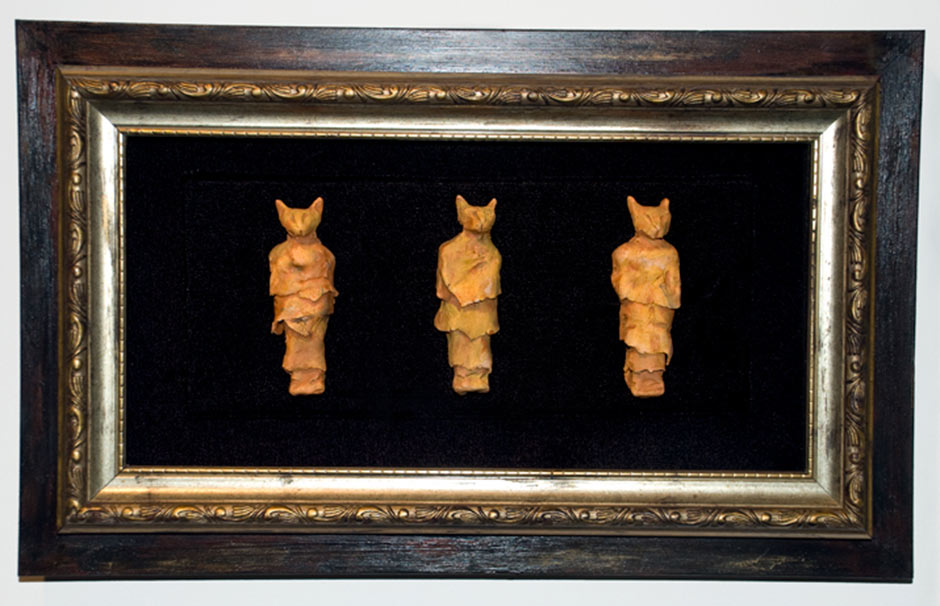 MB: When you began your work as an artist, what medium did you first explore?

DR: Well, when it came to my first experience of getting paid for my art, I would have to say food. I graduated with a degree in international relations and Italian literature with a focus on immigration. I wanted to work for the foreign services or something along that path. While I was deciding on graduate school, I took a job managing Muffuletta Café where they gave me the freedom to be creative. For years I was so focused on school that that I buried that part of my life. I soon realized that my real joy came from art when I found myself passing countless hours constructing detailed replicas of the restaurant and guests in Gingerbread and marzipan for a Christmas display (twice). This is also where I met Mark who was a server there. I went back to Ravenna, Italy to learn traditional mosaic techniques at the Cooperativa Mosaica with the intention of going in that direction. Mark “interrupted” that exploration when he asked me to make some mummies for a type-face case. I would have never guessed where it would lead! But looking back I can see how all the experiences and influences brought me here. And the catacombs are like mosaics comprised of sculptural figures – and are studies of populations.

MB: What other local artist should we be paying attention to? Why?

DR: I may be biased, but my studio partner Mark works with some unique (non-digital) photographic processes that you just do not see anyone else doing. There is a chemigram series which he really has not shown publicly. With his Kirlian photography he employs a flat copper plate, film and electricity to make electro-photographs of plants. He just had an exhibition called the “Secret Life of Plants” at the Bakken Museum, a museum that explores the electrical world. And people need to pay attention to the Bakken – there is so much to explore there; It is truly a hidden gem.

Terra Gatto Warriors can be seen until February 2nd at the Douglas Flanders Gallery, 910 West Lake St, Minneapolis. Denise Rouleau can be found online at http://www.deniserouleau.com/.