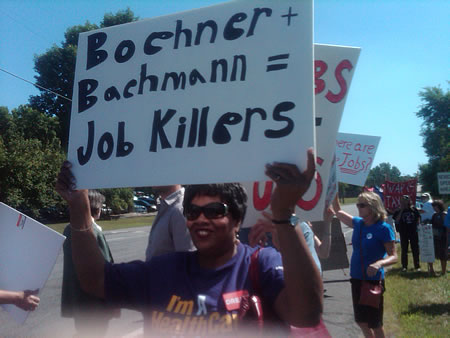 Outside the Wayzata Country Club, Minnesotans demanded action on jobs (above) as actors portraying U.S. Representatives John Kline, Michele Bachmann and Erik Paulson arrived in a limousine. (Photos courtesy of Minnesotans for a Fair Economy)

UPDATED 8/20/2011 – More than 200 Minnesotans gathered outside the Wayzata Country club Wednesday to demand attention from their member of Congress, who spent the day playing golf with donors for $10,000 a ticket. Saying radical budget cuts to health care and education would kill thousands of jobs for already struggling Minnesotans, the crowd called on the representatives to focus on putting Minnesotans back to work before courting high-dollar donors.

The crowd, organized by the community coalition Minnesotans for a Fair Economy and other groups, had followed the politicians and high-dollar donors, who made a last-minute change of venue from the exclusive Spring Hill Golf Club, apparently to avoid facing Minnesotans angry over their job-killing policies.

They watched as a plane flew overhead bearing a banner reading, “Where’s our piece of the pie? JOBS NOW.” The group was joined by puppet versions of U.S. House Speaker John Boehner and Minnesota Republican Representatives Michele Bachmann, Chip Cravaack, Erik Paulsen and John Kline, who arrived in a limousine. 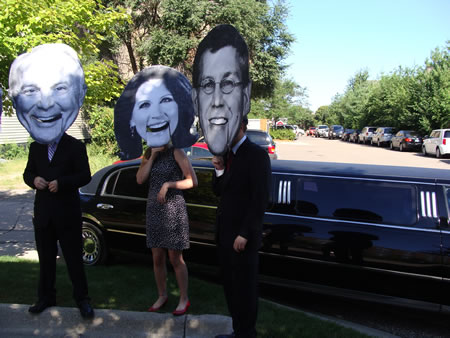 “These job-killing politicians are pushing radical budget cuts that threaten the jobs of nurses, teachers, and other hardworking Minnesotans,” said Minnesotans for a Fair Economy spokesperson Donna Cassutt. “It’s shameful that Reps. Bachmann, Cravaack, Paulsen and Kline are more interested in donors willing to pay $10,000 for a round of golf in order to protect tax breaks for the wealthy and corporations, while the Twin Cities has the second highest rate of black unemployment among large metropolitan areas in the United States.”

The protesters said Boehner, Bachmann, Cravaack, Paulsen, and Kline have not voted for any bills to create jobs and have instead supported a budget that economists say will kill 2.5 million American jobs, including 7,675 infrastructure jobs and 25,025 health care jobs in Minnesota. Meanwhile, all four also voted to give $2.9 trillion in tax breaks to the rich and big corporations.

“For average working folks and the poor, things are getting worse. I need a job that can really support my family,” said Angel Buechner, a resident of Minneapolis’ Phillips neighborhood, who attended the protest with her two teenage sons after hearing about the event at their church.

“People in our community have no jobs or are getting laid off, but politicians are bailing out banks, funding wars, and worrying about the wealthy while people are suffering.”

From her home in Cravaack’s Minnesota 8th Congressional district, Kathy Hern, an unemployed Minnesotan said, “I worked the same job for 20 years. I earned my Master’s degree. Now, I will lose my home when my unemployment benefits run out. Chip Cravaack is a job killer who protects the rich and corporate interests, while families like mine struggle to make ends meet. Now, he’s spending the day playing golf with rich donors, instead of listening to his constituents here in Duluth. We need jobs, not a Congressman who makes us pay to talk to him.”

Hern’s husband’s battle with Parkinson’s disease has meant huge medical bills. She doesn’t know how to play golf and can’t afford a $10,000 ticket. Cravaack will hold a meeting with a $10 price tag next week, but when your house is on the line, says Hern, “$10 is too much to pay to talk to someone whose salary you pay and whose job it is to listen for free.”

In a phone interview after the event, a spokesman for Cravaack clarified that, while the Congressman attended the luncheon at the Country Club, he does not golf and did not participate in the morning’s golf outing. Spokesman Michael Bars also said the $10-a-ticket event in Cravaack’s district is organized by the National Federation of Independent Business for its members and not a meeting hosted by the Congressman.

UPDATED 8/20/2011 by addition of Cravaack statement in second-to-last paragraph.