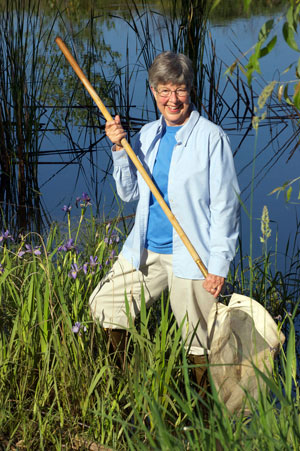 In 1995, a group of schoolchildren enjoying a leisurely nature hike around Ney Pond in south central Minnesota began finding frogs with extra limbs, missing limbs and other abnormalities such as extra eyes. Their teacher placed a call to the Minnesota Pollution Control Agency (MPCA) to report this alarming discovery.

Judy Helgen, then a research biologist at the MPCA, was soon on the scene, examining specimens and conducting interviews to get to the bottom of the aberration. Even a seasoned scientist like Helgen was shocked at the hideous malformations in these delicate creatures.

In her new book, Perils in the Pond: Deformed Frogs, Politics, and a Biologist’s Quest, Helgen described what she saw: “The first frog had one rear leg completely missing. … The second had a stumpy leg, half the normal length. It swung around uselessly. ‘This is awful,’ I said … feeling my stomach churn. …”

This was not the first time Helgen was asked to investigate deformed frogs. “In 1993, people in Granite Falls reported finding them,” she said. Although she only found three or four deformed frogs on that investigative trip, she said, “I always felt that the citizens who reported this were right; they weren’t making this up.”

A year later, in 1994, the MPCA received Environmental Protection Agency (EPA) funding to research the frogs and Helgen returned to Granite Falls.

“We looked all over that area and came up with nothing,” she said. “It was later in the season and many of the frogs had probably already died.”

She lost credibility because of this, she said. “It was a setback, and I was wondering if these initial reports were a fluke.” Yet, the deformed frogs haunted her, she said. “There was no way I could become immune to how awful this is.”

Then, in 1995, reports of deformed frogs, first from Ney Pond and then throughout Minnesota, began pouring in.

Helgen, who lives in Roseville and is now retired, holds a doctorate in zoology from the University of Minnesota. Born in Winchester, Mass., to parents who were both scientists, her scientific proclivities came naturally. “I’ve always loved science,” she said. “It’s about being curious, asking questions and being enthusiastic.”

Her other love, aquatics, was the result of growing up in New England. “I loved being near the ocean,” she said.

She majored in zoology at Mount Holyoke College in Massachusetts and later received her master’s degree in zoology from Columbia University in New York. She’s taught at many places, including St. Olaf College in Northfield and Metropolitan State University. In 1989, she joined the MPCA as a state government research scientist in biological monitoring where she promoted checking survey assemblages of fish and aquatic invertebrates—not just a few chemicals—as a way to monitor water pollution.

Helgen learned quickly that the issue of deformed frogs was a political hot potato. “What we were doing was unpopular and controversial every step of the way,” she said. She described one situation where the Department of Agriculture provided free analysis of pond water and sediments for the MPCA: “We wanted to know how they collected their samples. The guy (from the Department of Agriculture) couldn’t just send the protocol they used. Instead, this request went up the chain to their commissioner who, in turn, contacted our commissioner, saying that it sounded as if someone at MPCA was on a witch hunt. All we wanted to do was analyze pesticides and parasites. It was very strange.”

She theorized that the various government agencies did not want to rankle other entities, such as the farm lobby.

Helgen and her colleagues continued investigating the deformed frogs and listed the possible contributors to the crisis: climate change, genetic mutations, pesticides, herbicides, predators and parasites. “We looked at everything,” Helgen said. After extensive research, Helgen concluded that chemical pollutants were probably the main culprits.

Helgen soldiered on, convinced of the epic importance of these findings and determined to find the causes.

By the mid-’90s, the deformed frog population had exploded in Minnesota. In 1997, Helgen attended an international conference in Prague where she learned that deformed frogs were showing up throughout the world.

In time, the MPCA asked Helgen and her colleagues to spend less time investigating frogs. Finally, in 2001, the MPCA announced that it was ending the frog investigation. Helgen retired from the agency the following year. The public’s interest in the matter seemed to end too.

While attending the World Congress of Herpetology in British Columbia in 2012, Helgen joined a group of eco-toxicologists in a conversation about the extinction of amphibians and reptiles. “They said, ‘You know, extinctions aren’t sexy anymore.’ At first it was sensational, then people become desensitized to it, and the media moves on to sensationalize something else.

“It wasn’t as if we got the answer to [why the frogs were deformed],” she said. “We didn’t. It just fell off the media radar.”

The problem is not just the deformed frogs,―it’s about us and what has happened to our environment, Helgen said. “About 60 percent of the wetlands are rated poor. We’re finding coal tar sealants and other petroleum-like chemicals in many wetlands, and some of this is classified as hazardous waste. And, since frogs are an indicator species, their current condition doesn’t bode well for us.”

The mystery of deformed frogs has yet to be solved, but Judy Helgen plans to ensure it does not devolve into a cold case.

For more information about Helgen or her newly released book, Peril in the Ponds: Deformed Frogs, Politics, and a Biologist’s Quest (University of Massachusetts Press, 2012), go to www.judyhelgen.com.

Natalie Zett has been writing for the Bugle since the early 1990s. Her work has appeared in a number of Twin Cities publications.