In his State of Union address, President Obama noted that one of the most serious problems confronting the nation is growing income inequality. Perhaps the most troubling manifestation of this problem is the real decline in income among middle- and lower-income families. The national problem of declining income is also a Minnesota problem—affecting all regions of the state and commencing well before the start of the Great Recession.

Median household income represents the income level that divides a population in half, with the incomes of 50 percent of households below the median and the other 50 percent above. Because it is not skewed by extremely high incomes at the upper end of the income spectrum, median household income is a useful way to gauge the income of the typical household. The following analysis is based on real median household income data from U.S. Census Bureau’s American Community Survey (ACS) as compiled by Minnesota Compass for the years 2000 and 2006 through 2012. (Information for 2001 to 2005 is not included in this data set.) All amounts presented below are in constant 2012 dollars. 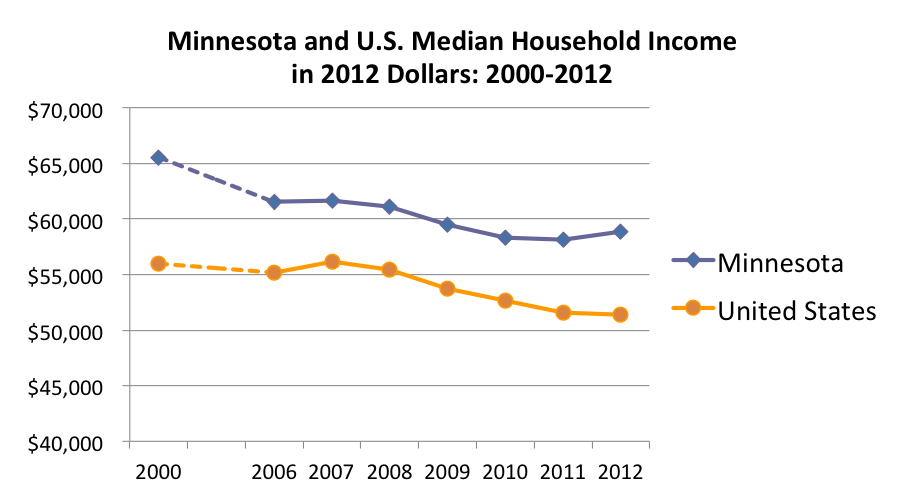 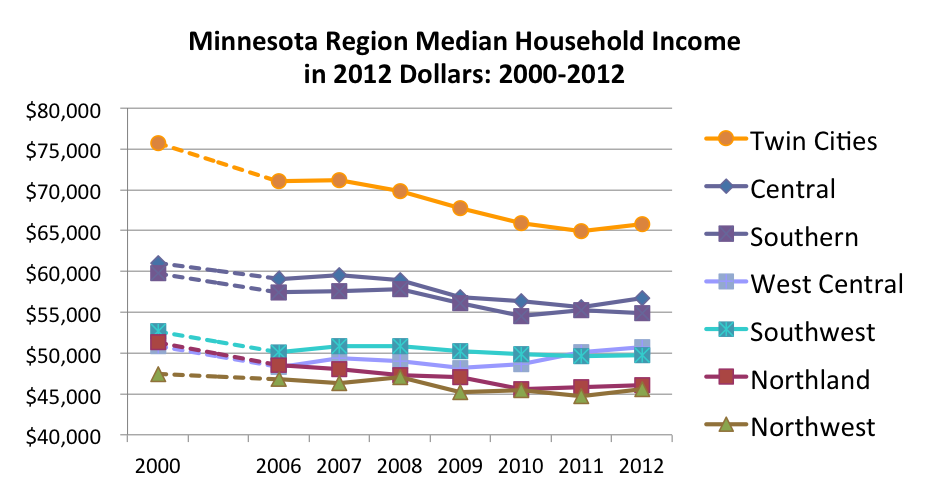 This information underscores that growing income inequality is not simply the result of skyrocketing income among the “one percenters.” The problem is not that the incomes of the wealthiest households are growing more rapidly, while the incomes of the less affluent are growing less rapidly. Rather, the problem is that the income of the typical American family is falling as demonstrated by the decline in median household incomes.

Conservative advocacy groups like the Heritage Foundation urge us not to worry about income inequality, but rather to focus on growing the economic pie so that everyone benefits. However, this recommendation overlooks the fact that the economic pie—as measured by real per capita GDP—has grown since 2000, yet the median income of U.S. and Minnesota households has fallen. Growing the pie won’t help the typical Minnesota or American family if their slice of that pie is shrinking faster than the total pie is growing.

The economic pie will grow faster if working families are able to get a bigger piece of it. The backbone of the U.S. economy is middle class consumer demand. When the income of middle class increases, consumer demand increases, which in turn will spur business and job expansion and robust and sustainable economic growth. As Paul Wellstone said, “We all do better when we all do better.” If, on the other hand, median household income continues to decline, consumer demand will decline, and the state and national economy will limp from recession to recession, punctuated only by lackluster recoveries.

The problem of income inequality is ominously manifested by the decline in real median household income—a trend that is both long-term and widespread, persisting through two economic recoveries and affecting the nation, state, and every region within the state. These trends—and the pernicious economic consequences that they spawn—will likely continue until state and national policymakers make a concerted effort to reverse them. Increasing the minimum wage and—beyond that—strengthening collective bargaining rights would be a good place to start.