He’s known as the Bad Boy, Bachelor Boy and Debonaire, but the title that best fits Andre “Debonaire” McNeal is Minnesota’s King of Clubs. 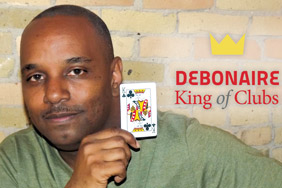 McNeal is easily the best known and one of – if not the – most successful “urban” promoters in the Twin Cities. And with events such as the Afterwork Jumpoff, Quarter Club, Damn the Jokes, First Fridays, the Takeover and a slew of concerts including the upcoming July 12 Doug E. Fresh show at the Cabooze, King Debonaire plans to hold tight to his throne. But for McNeal, he rules not as a dictator, but as collaborative monarch, spreading wealth throughout the kingdom.

“I love working with everybody,” said McNeal, while sitting down inside a downtown Minneapolis coffee house. “It’s about networking and making sure all of us (promoters) are eating.”

That’s not to say that he hasn’t ruffled a few feathers along the way. No one gets to be king without making a few enemies along the way. But no king can rule with an iron fist and not expect a coup. It’s a delicate balancing act.

“Cats need to understand promoting protocol and industry etiquette. Very few people here have that etiquette,” said McNeal. “If you want to know why I’ve lasted so long it’s because I’ve had the etiquette and integrity.”

On a consistent basis, McNeal has by far lasted longer than any other urban promoters in the area. Promoters such as Ray Seville and Brother Jules certainly can lay claim as enduring pioneers in the Twin Cities promoting game – and in many ways paved the way for McNeal – but neither are currently producing as many events as McNeal, who appears to show no signs of slowing any time soon.

To fully appreciate McNeal’s reign as king, one needs to know the history of “Debonaire.”

“I moved to Minnesota in September of ’95,” recalled McNeal. “It was an invitation via my late God-uncle Jimmy Lawson, and his wife, Naomi Lawson. They wanted me off the streets of Chicago,” said McNeal, who was candid about his past. “At the time I was in Chicago dealing drugs and throwing parties.”

McNeal accepted the invitation and came up to work at the Foot Locker in Mall of America and for Pillsbury.

“They (Pillsbury) had a baking school and Jimmy said if I completed that, he’d put me through chef school,” said McNeal. “Sounded like a good two-year plan to me.”

“When I got here the scene was mostly boring,” said McNeal. “For fun I’d go to Sunny’s every Thursday for karaoke. I met a young lady who started showing me around the city. We drove by the Riverview and saw there were a bunch of Black people there so I got out the car and told her, ‘Thank you, I’m home.’”

The Riverview Supper Club was a popular nightspot in north Minneapolis. The club, owned by the Fuller family, shut its doors in 2001.

“There I met Billy Holloman and Johnny Hodges – rest in peace – of the Sho Nuff Band and I told them if they ever wanted someone to host and do some comedy, call me. Johnny told me they already had someone and I said, ‘Yeah, bet he ain’t that funny; I’m funnier,’” recalled McNeal.

As McNeal recalls, he was given an audition the next week. When he learned he was hired, he was also told he had to tell the previous host he was fired.

“I wasn’t going to take the job because I felt bad. But then the guy who was hosting came up to me and was like, ‘yeah, leave your number with the bartender and if we need you we’ll get back to you,’” said McNeal with distain in his voice.

“I told him, no you, leave your number with the bartender and if we need you we’ll get back at you. He was trying to hold me back and I wasn’t going to be held back by anyone. And that was the start of Debonaire Dre’s 25-plus Saturday Night Live at the Riverview.”

It was during this time that McNeal was invited to appear on KMOJ’s Paris Tyler Show. That one guest appearance led to a permanent on-air radio gig.

“I went on and cracked jokes, did what I did and the phones were ringing off the hook. At the end of the shift Paris invited me back. After the second appearance on the show Paris asked how often can I sit in,” said McNeal.

The show became known as Paris Tyler and the Bad Boys with Tyler, McNeal and fellow radio personality, Shock G. McNeal said that was a great time in his life except for one thing.

“I developed a stalker,” said McNeal. “It wasn’t funny to me, but to (his co-host) and the audience it was hilarious.”

Stalker aside, things were looking promising for the future King of Clubs.

McNeal, along with Darryl Robinson and Kareem Tyson, created a weekly event, Fat Tuesdays that according to McNeal was the talk of the town, at a downtown Minneapolis club, Caribbean Splash.

“I was told nobody comes out in Minnesota on a Tuesday night and I quickly killed that myth,” said McNeal, who added that the night was a regular hangout for celebrities and athletes.

“I’ll never forget Ralph Tresvant and Johnny Gill dancing on the tables; Wally Szczerbiak getting blitzed and showing his love for Black women; Torii Hunter, Jacque Jones, Malik Sealy – one of the coolest cats I ever met,” reflected McNeal.

With the success of Fat Tuesdays, McNeal was brought on to promote at the downtown Minneapolis hot spot, South Beach, owned by David Koch (current owner of 7 Sushi Ultralounge and Skybar). McNeal called South Beach the first truly upscale Minneapolis nightclub and the first to offer bottle service – today a nightclub standard.

McNeal said he hosted an event, Wind Down Wednesday, at South Beach with Tim Wilson, owner of Urban Lights. “We did that for five years,” said McNeal.

Life as promoter isn’t always sunshine and tulips. The nightclub industry can be fickle and cutthroat. Take for example McNeal’s stint promoting at the now closed Sharks in northeast Minneapolis. According to McNeal, he was packing the house on Saturday nights when previously the venue was empty.

“I’m making this man (the owner of Sharks) money hand over fist and all of a sudden he comes to me and says my Saturday is killing his Fridays so he needs half the door,” said McNeal. “Now this place was empty before I got there and now he’s selling out of product every week and he wants half the door?”

McNeal said he left Sharks and went down the road to Gabby’s where he packed the place every Friday. Sharks closed three months later. Gabby’s was later sold and is now Psycho Suzi’s.

Up next for McNeal is a weekly collaborative Saturday night with promoter Chris Lee at Tryg’s starting June 22. McNeal said just like his Afterwork Jumpoff at Insert Coin(s), The Tryg’s event will feature a different DJ each week.

“It’s all about building relationships, networking and keeping people on their toes,” said McNeal. “I’m a person who loves seeing people come out and have a good time. That’s what it’s all about.”