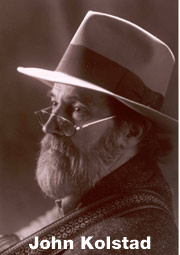 If the electorate is only allowed to hear from some of the candidates for office, is that democracy? Who decides who the public will hear and who will be shut out? Should publicly subsidized media be allowed to discriminate regarding which candidates have access to the public? Essentially, campaigns are job interviews for important public jobs. How do we know we are getting the best, the brightest, the most capable if the public is not allowed to hear from all the applicants?

MInnesota elections are managed and controlled. The two major parties and the media control who gets to speak and who gets coverage of their campaigns. This is all subtly done behind the scenes by power players with vested interests, then painted with a patina of democracy and civic pride.

In the attorney general race, I have been blocked from all debates. The honorable exception to this is KTCA. TPT-Channel 2 invited me to the Almanac Attorney General Forum. Go to my website, www.papajohnkolstad.org, and click on Papa John Impresses on TPT. Judge for yourself whether I should be in the debates.

Exclusion of candidates who are on the ballot is unfair, undemocratic and bad public policy. I’d like to see every candidate who qualifies for the ballot in the debates. It is not a fair and honest election if the electorate does not hear all the candidates.

Minnesota Public Radio is denying me an invitation to the Oct. 10 AG debate. They chant the Major Party mantra. However, MPR is a nonprofit organization that receives public money and other special considerations. What gives MPR the right to discriminate? Who are they serving? Does this serve their public members or their corporate sponsors?

This is not just about my campaign or the Green Party. This is about the fundamental undermining of elections versus fair and open democratic processes. If we are a democracy, we should demand that we hear from all our candidates at every forum.

Members of MPR and citizens whose tax dollars support MPR should demand an end to this discrimination. Let’s put the Public back in Public Radio. MPR brags on air that they inform the electorate, then immediately censors the information about the coming election. Minnesota deserves better.

Minnesota and America are experiencing a major failure of our elected officials to solve the pressing problems of the vast majority of people. A major reason for this is that large, powerful financial interests are controlling who gets elected. Controlling who gets to run and who gets to be in public debates is one of the most effective tools they use. The famous Tammany Hall politician, Boss Tweed, once said, “I don’t care who wins the election … as long as I pick the candidates.”

We can do better. We deserve better. We must demand fair, open elections, and that must include hearing from all those who are on the ballot.