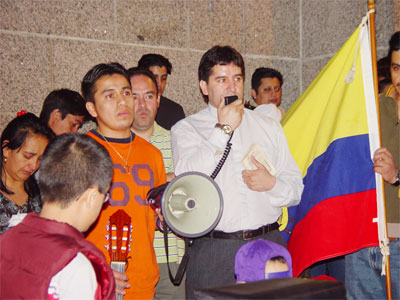 Supporters held a vigil for Maria Inamaguas at Regions Hospital the night before she died.

The family of Maria Inamagua, an Ecuadorian woman who died after falling ill while in custody at the Ramsey County jail, is calling for an official investigation of her treatment while incarcerated. Inamagua, whose full name is Maria Filomena Inamagua Merchan, died on April 13 at Regions Hospital in St. Paul from what doctors described as parasites that deprived her of oxygen to the brain.

Family and community members charge that Ramsey County jailers were negligent in providing appropriate medical treatment to Inamagua in a timely fashion in violation of county and state regulations. In addition, they have charged that government officials violated international human rights treaties concerning the treatment of prisoners.

Inamagua was arrested on February 24 by agents of the department of Immigration and Customs Enforcement (ICE), a subdivision of the Department of Homeland Security, on allegations that she violated a deportation order.

According to family members, shortly after entering the jail she began to complain to jail officials of sharp, painful headaches. The jail officials’ response was to give Inamagua Tylenol before bedtime.

After almost five weeks in custody, on Monday, April 3, Inamagua struck her head while climbing out of her bunk bed. The St. Paul Pioneer Press reported that according to emergency room records obtained by the paper, “Jail medical staff…waited four hours while [Inamagua’s] condition worsened before rushing her to nearby Regions Hospital.”

Inamagua arrived at Regions in critical condition and fell into a coma. She died 10 days later.

According to the Pioneer Press, Ramsey County Sheriff Robert Fletcher confirmed the fact that Inamagua complained to jail staff. He also said that she did not receive special medical attention until after her collapse.

“I was told this was a previously undiagnosed brain condition,” said Fletcher.

Family and community leaders, who will hold a press conference August 15, have demanded an official investigation into her death. In a seven-page memo to the Department of Homeland Security drafted by supporters of the case, family members criticized jail officials “for not taking her previous health complaints more seriously, failing to provide responsible medical treatment in response to her complaints, and for failing to seek appropriate medical attention quickly after she collapsed.

“I think it is very positive and important that the community has come around the family,” said Peter Brown, president of the Minnesota chapter of the National Lawyers Guild. Brown has been working with Inamaguas’ family and community leaders to pursue justice in the case. “This is not just a phenomenon that happens to immigrants,” said Brown. “It happens to people in other oppressed communities also.”