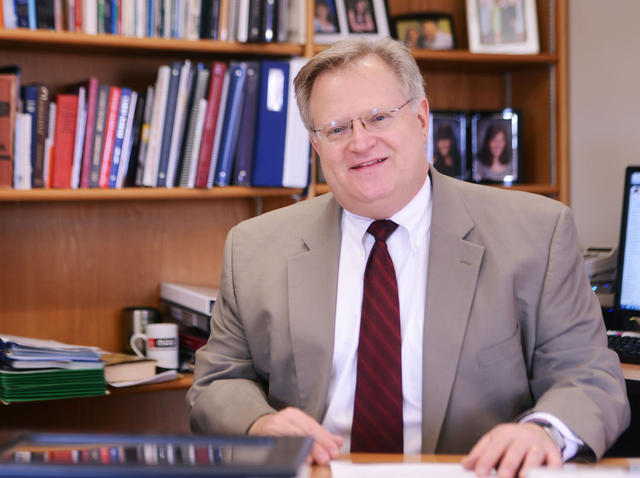 University Dean of Humphrey School of Public Affairs Eric Schwartz on Wednesday, April 24, 2013, in his office. Schwartz was recently nominated to the U.S. Commission on International Religious Freedom, which monitors different circumstances overseas where religious freedom is endangered. (Photo by Jaak Jensen)

On a shelf in a large office overlooking the University of Minnesota West Bank sits a framed photograph of two men.

In it, Eric Schwartz attempts to detail a migration issue while former President Bill Clinton looks down, smiling.

“And as I’m briefing him, he reaches down to my shirt and starts adjusting my tie,” said Schwartz, who heads the University’s Humphrey School of Public Affairs.

“I’ve been very lucky in many respects,” said Schwartz, whom President Barack Obama nominated to the U.S. Commission on International Religious Freedom earlier this month.

Although he’s been at the University for only 18 months, Schwartz has traveled throughout the developing world for more than 30 years, negotiating with countless world leaders and establishing himself as a national authority on international relations.

Still, Schwartz is reserved, speaking only of his accolades when pressed and constantly attributing his success to good fortune.

“My parents were very interested in the world outside of our home,” Schwartz said, “and very committed to the idea that we all have an obligation to serve others.”

Since then, Schwartz has worked in public service with the United Nations, under President Clinton’s administration at the National Security Council and at many humanitarian foundations.

During his time in the White House, Schwartz was very influential in Clinton’s decision to join the International Criminal Court, which prosecutes against crimes such as genocide.

Most recently before joining the Humphrey School, Schwartz served at the Bureau of Population, Refugees and Migration in the U.S. Department of State under then-Secretary of State Hillary Rodham Clinton, whom he described as a “wonderful boss.”

There, he said his greatest accomplishment was doubling the funding for the State Department to support newly arrived refugees.

Despite his impressive résumé, Schwartz said he’s faced some disappointment in his career.

“You don’t always hit a home run or even get a base hit every time you step up to the plate,” he said. “Though overall, my career has been extremely gratifying.”

Schwartz took over as Humphrey dean in October 2011 and said he’s enjoyed his time on the job.

“It’s fun to be around young people who are so inspired and so committed to not only doing well, but doing good,” he said.

Laura Bloomberg, executive director of Humphrey’s Center for Integrative Leadership, said Schwartz is a very inclusive decision-maker, which makes him a pleasure to work with.

“He has a terrific sense of humor,” she said. “He’s a very jovial guy.”

Schwartz came to the Humphrey School with the intention of internationalizing the curriculum and establishing ties between the school and Washington.

“Our students and our faculty should be influencing and informing the policy discussion on the biggest issues that the world confronts,” he said.

As far as Larry Jacobs is concerned, Schwartz has exceeded expectations.

“He’s a pretty rare talent. The Humphrey School is lucky to have him,” said Jacobs, the director of Humphrey’s Center for the Study of Politics and Governance.

Jacobs said Schwartz was the “the right guy at the right moment” as student interest in international affairs has increased in recent years.

Outside of work, Schwartz enjoys vacationing at the beach with his wife and two teenage daughters.

He can also be found at the campus recreational center, where he has run into students in the past.

Schwartz said he advises students interested in public affairs to get involved and network while they’re young.

He’s always found his work to be gratifying, but Schwartz said he hopes the peak of his career is yet to come.

“The focus of a career in public life is on something that is broader than your own well-being. You’re concerned with the well-being of society at large.”