A couple of years ago, at 16, he got into trouble with the law for vandalizing property and fighting. “I had some problems with gangs,” he admits, a soft-spoken, dark-eyed young man.

Now he’s walked away from that criminal life, had his gang tattoos removed and plans to return to high school, all with the help of God, Neighborhood House and a few others, he says.

You might call Uziel a poster child for Neighborhood House‘s Gang Reduction and Intervention Program (GRIP), a program that steers kids away from gangs and crime toward a better future and has numbers to prove they can do it.

“We know through past experience we cannot arrest our way out of the problem,” says St. Paul Police Commander Paul Iovino, who heads the department’s gang unit. What’s needed is intervention and the GRIP program is a “critical resource in that,” a path out of gangs for kids, he says.

Yet GRIP is now one of a myriad of programs around Minnesota grappling with state funding cuts while still trying to carry out their missions.

“It seems that kids who have been involved in gangs, it’s not a great sale,” says Michelle Ness, director of programs and evaluations at Neighborhood House, a landmark social service agency on St. Paul’s West Side, an increasingly diverse side of town.

Neighborhood House had requested from the Department of Public Safety $175,000 toward its operating costs but received less than half that, despite praise from St. Paul Police and the Ramsey County Sheriff’s Department. Officers even take GRIP kids – Latinos, Hmong, African-American and Caucasians — fishing.

Money these days seems to be channeled toward prevention, starting with prekindergarten, Ness says, applauding those efforts but lamenting cuts to her program for older children. About 85 percent of GRIP programming comes from the state or the Ramsey County Sherriff’s Department.

From funding for 1.5 staff, they now have money for less than one.

Just last week the agency laid off a social worker employed part time by the program and informed a therapist they don’t have the funds right now to pay him to counsel youth on dealing with trauma, anger and violence.

Staff is writing grants in search of other funds for the program that channels kids toward better futures.Locally, the Charities Review Council shows Neighborhood House meeting their standards.

“I’m less worried about my funding than theirs,” says therapist Resmaa Menakem, a licensed clinical social worker who has been working with some in the group over the past few months. 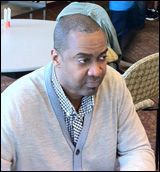 “They like coming here, debating, talking about real things, doing community service. They speak about cultural pride and how important it is in your development as a person. Some of these boys are very, very tough … and they come here every week. A lot of them have been in trouble with the law,” Menakem says.

For an example of the effectiveness of the program, Menakem describes a recent verbal altercation between some African-American kids in the park outside Neighborhood House and a young Latino member of the GRIP program. The GRIP kid was tempted to fight, Menakem says, but “these kids just surrounded him and said, ‘No, don’t fight, come on, get inside.’ “

There was no physical fight, just verbal back and forth, Menakem says. “A year ago there would have melee on the street.”

“Out there, in the world, you forget about who you are. You fight. This group makes you communicate with people,” Uziel affirms.

He’s talking specifically about the group Jovenes con Palabra (loosely translated from the Spanish as “young men of their word”), one of the Neighborhood House programs under the GRIP umbrella, open to former gang members and kids in danger of gang involvement.

“These guys at Neighborhood House do a wonderful job. They’re giving them [youths] the tools they need to work things out in a non-violent manner,” says Rich Clark, commander of the violent crime enforcement team with the Ramsey County Sheriff. So far this year the department has contributed $20,000 to the program.

“It’s intervention and prevention at its finest,” says St. Paul Police Chief Tom Smith, who also sits on the board of Neighborhood House. Smith says the program provides positive mentorships and positive programming.

Ness says about 50 young people, mostly males, between 11 and 19, have been involved in the program in the past year. Ninety-seven percent of them stayed out of trouble with the law for a year, an “excellent, excellent outcome,” Ness says.

‘Bad kids in the neighborhood’

“The kids normally were seen as these bad kids in the neighborhood,” says Enrique “Cha-Cho” Estrada, the program’s director. Now they’re handing out food at picnics, helping clean up parks, painting park benches, he said.

The prevention piece, giving kids something good to get involved with, is a walloping big part of GRIP, adds Estrada.

The effort includes weekly meetings with speakers and field trips, free gang-tattoo removal in cooperation with Boys and Girls Clubs of the Twin Cities, tutoring, boxing lessons, social support systems and volunteer work in the community.

Recently, they met over beef and chicken taquitos and a hefty serving of Latino culture and to celebrate friendship, personal responsibility, and their futures.

Carlos Velasco, 14, from St. Paul, hasn’t ever been a gang member, but is attracted to Neighborhood House for its programs, like Jovenes. “I like that my friends come and to learn something new,” he said. With the group, he’s been to Chicago for an Aztec exhibit, to plays and other activities.

Maricio Thelen, 16, comes because of his dad, David, who helped Estrada start the program. “We just have like a bond between us and what it is like to be a good man … to be honest and true,” he says.

Kids come because of “Cha-Cho” as well, says Iovino, with the St. Paul Police. “Cha-Cho,” he says, “just has a different path in” to reach kids, given his background working with the Boys and Girls Club and Neighborhood House and long history working with kids on the streets.

Call him after hours and he’ll be right there, Iovino says, naming Neighborhood House and GRIP as “allies” and partners to those in law enforcement.