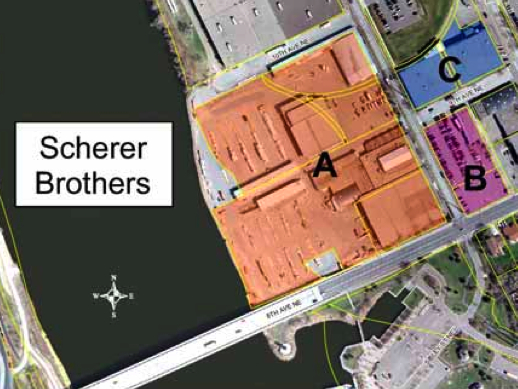 Photo from Minneapolis Park and Recreation Board documents

The Minneapolis park board is planning to use $1.7 million in Metropolitan Council funds to buy a piece of Mississippi riverfront property from the family business of a Met Council member.

Met Council member Roger Scherer maintains a financial stake in Scherer Bros. Lumber Company company, though he retired as president and CEO 15 years ago. (His son, Peter, is now president.)

Scherer tells the Minnesota Independent that if the question of funding the purchase comes before the Met Council, he won’t vote on the matter, discuss it with fellow council members, or attend a meeting of the council’s Community Development Committee when it’s considered there.

That’s in keeping with state law governing conflicts of interest, according to Met Council spokesperson Bonnie Kollodge, who couldn’t recall an instance of council funds being used to buy property in which a member had a financial interest.

The 16 Met Council members are appointed by the governor. Roger Scherer is the longest-serving member, with 17 years’ service under three governors, all Republican.

Among other things, the Met Council has authority over transit, water and sewers, and regional parks in the Twin Cities metro area. Some Minneapolis parks have regional status and get money from the Met Council. The newest is known as Above the Falls, running along the Mississippi River from Plymouth Avenue just north of downtown to the city’s northern border. The park board, the Minneapolis City Council, and the Met Council approved a plan for Above the Falls that envisions a strip of riverfront parkland and a path at the Scherer Bros. location, just above Plymouth Ave. on the river’s east bank.

Scherer Bros. Lumber Company, which ceased operations at its Northeast Minneapolis yard on Dec. 31 (pdf), has been trying to sell the 13.84-acre property since at least last summer. A prospective buyer for part of the property lost interest in the fall. That’s when park board staff – who had been called in on the earlier deal due to the park board’s interest in land along the river and for a path – say they began to pursue purchase of the entire property (pdf).

The park board had negotiated an easement for a strip of land along the river with the industrial property owner immediately upstream but was unable to do so with Scherer Bros., according to minutes from the Above the Falls Citizen Advisory Committee (pdf).

At its final 2009 meeting – and the last meeting for four of nine commissioners who didn’t win or seek re-election – the park board voted to pursue the deal. The proposal hadn’t come via the usual committee process and there was no price tag attached. However, at the Dec. 16 meeting (video, starts at 1:41), Commissioner Jon Olson cited an appraisal’s “reasonable price” of $650,000 per acre, which would put the total cost for the entire site at nearly $9 million.

One park commissioner, Annie Young, abstained from the vote, citing pollution concerns. Park board planner Judd Reitkerk assured her that environmental studies had found no vermiculite, a material that in local stockpiles was tainted with asbestos, prompting massive cleanups in Northeast Minneapolis – including at the park board’s own Gluek Park only a mile upstream.

But the studies of the Scherer Bros. site show that asbestos was indeed found on the property (pdf).

A purchase agreement, including payment of $400,000 in earnest money to Scherer Bros., was supposed to be completed by the end of December. But that’s been stalled by confusion over who, if anyone, owns part of the property’s river frontage. (A triangular piece of land, possibly a result of infilling or sedimentation, comprises almost half the property’s length along the river, but isn’t included with the Scherer Bros. title.)

The company offered to finance the deal over four years at 3.25 percent interest, according to park board staff, who said other possible sources of money included the state’s new Legacy fund. The $400,000 payment, refundable if the sale falls through, would come from proceeds from the sale of parkland downstream to the Minnesota Department of Transportation for the new I-35W bridge.

Plans are for the park board to take a final vote on the deal within 90 days of the signing of the purchase agreement. The Met Council spokesperson says they haven’t yet received an application for funds for the project.

Why buy nearly a nearly-14-acre lumber industrial site – complete with buildings and parking lots, “mostly concrete, ” as described by Cristof Traudes in the Downtown Journal – if the park plan calls only for a strip of riverfront and a recreational path?

“Their interest is in selling the entire property,” Reitkerk told the park board at the Dec. 16 meeting, and the Scherer Bros. Lumber Company wanted the deal done by Dec. 31. He termed it “a friendly purchase.”