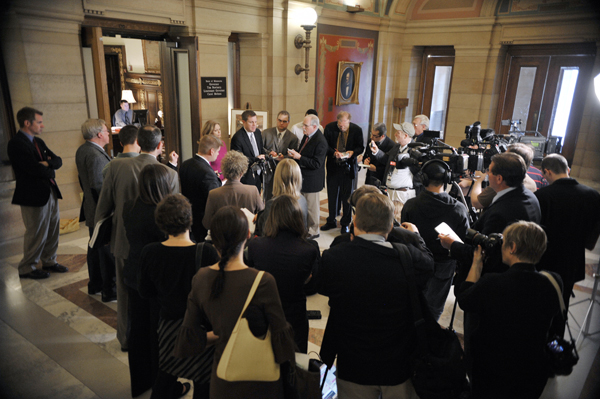 Once again, the race to balance the state’s budget has come down to the wire.

Legislative leaders and Gov. Tim Pawlenty met throughout the week to discuss possible ways to erase a projected $3 billion budget shortfall. They reported lots of ideas, but – as of Session Weekly publication time – no solid agreement.

“There’s not a plan; there are some ideas that are out that everyone is thinking about and talking about,” said House Speaker Margaret Anderson Kelliher (DFL-Mpls).

Among the points of contention, Pawlenty wants the Legislature to ratify his $2.7 billion in spending unallotments from 2009. The Minnesota Supreme Court ruled May 5 that the unilateral cuts were an executive overreach by the governor, effectively throwing them out.

DFLers oppose ratifying all of the governor’s unallotments, especially a $1.8 billion delay in K-12 school aid payments that they say the governor has no plans to pay back. They say a budget deal must include a mechanism to start paying back the K-12 shifts back in the next biennium, and also protect poor and needy Minnesotans from health and human services cuts.

“Standing up for Minnesotans who are frail and fragile is important to us right now, and we want to make sure that there is a way to pay for that,” Kelliher said.

On May 10, the Legislature passed a DFL-backed measure that would have enacted many of the governor’s unallotments, including the K-12 shift. It also included a new, higher income tax tier for wealthy Minnesotans that would have raised $443 million in new revenues. DFL leaders argued it was a fair compromise, but Pawlenty vetoed it, arguing tax increases would harm the state’s economic climate.

Lawmakers could still vote to override the governor’s veto, but House DFLers would need at least three Republicans to join them in doing so. Senate Majority Leader Larry Pogemiller (DFL-Mpls) said the Legislature is unlikely to push very hard on the tax issue as budget negotiations move forward.

“I think it’s fair to say the governor is not interested,” Pogemiller said, adding, “We got the point.”

Another issue is whether to allow Minnesotans to opt in to an early expansion of Medicaid. The provision was included in an omnibus health and human services finance bill that Pawlenty vetoed May 13.

All week long, House and Senate leaders could be seen filing in and out of the governor’s office, trying to negotiate a compromise. All sides reported progress and a positive tone to the discussions, despite a lack of overall agreement. When it rains, it pours

Just a few weeks ago, lawmakers thought they were facing a very different budget situation.

By late April, the Legislature had already passed and Pawlenty had signed a bill that cut the deficit by $312 million. With the federal government expected to kick in $408 million, lawmakers and the governor only had a $128 million problem left to deal with, in theory. The situation appeared to be under control.

Then, on April 27, the picture began to cloud. Legislators got word that the federal money was unlikely to arrive before the Legislature adjourned because the enhanced Medicaid match funding had unexpectedly stalled in Congress. State budget officials were “80 percent” sure that the money would eventually come; nevertheless, they suggested lawmakers come up with contingency plans in case it didn’t.

Eight days later, the Minnesota Supreme Court threw the entire legislative session for a loop. The court ruled that Pawlenty had overstepped his executive authority last year when he unalloted $2.7 billion in state spending. In a 4-3 decision, the court reasoned Pawlenty was wrong to use unallotment before the budget was balanced.

In an instant, the state’s budget gap swelled to more than $3 billion. With 12 days to go, the state’s leaders now had a much bigger problem to address.

The situation grows even more complicated when you throw in the state’s cash flow problems. For months, the state’s cash accounts have been dwindling to precariously low levels, mainly because of poorer-than-expected tax receipts. To avert a projected shortfall earlier this spring, the state even had to delay $416 million in payments – mostly to K-12 school districts.

With the governor’s unallotments undone, the state’s cash flow situation ups the ante for a budget deal. Brian McClung, Pawlenty’s spokesman and deputy chief of staff, said that if a judge were to order reinstatement of the unalloted spending, the state would instantly run out of money.

“If all of the unallotments were undone, or even if just the K-12 deferral itself were undone, the state would not have the cash flow money that day,” McClung said.

Pawlenty has asked state agency heads to begin planning for what McClung called a “crisis scenario.” If the state does run out of cash, McClung said the governor may have to order a reduction in some state services or even a government shutdown.

The leaders are optimistic that won’t have to happen. Summing up the situation, Senate Minority Leader David Senjem (R-Rochester) said the options on the table aren’t all that great, but for the time being, they just have to work.

“We can make this work,” Senjem said. “I think we’ll come to the realization that they may not be the best solutions, but they are a solution.”