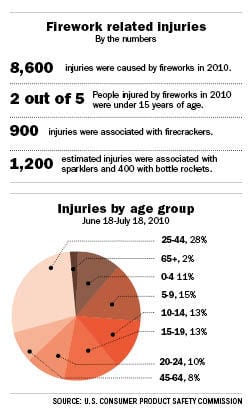 He vetoed a bill that would have allowed the sale of larger fireworks in Minnesota. The current law allows for the sale and possession of some nonexplosive and nonaerial types of fireworks, like sparklers, cones, party poppers and snakes.

The bill, originally authored by Rep. John Kriesel, R-Cottage Grove, would have allowed the sale of larger, more “novelty” fireworks. Proponents argued that a large amount of revenue could be generated if the sales were allowed, as many Minnesotans cross the borders into neighboring states where larger fireworks are sold.

In his veto message, Dayton said the law would put many Minnesotans at risk of injuries and property damage.

“It is government’s foremost responsibility to protect the safety and the well-being of its citizens,” Dayton said. “In this case, government has the responsibility to do its utmost to protect vulnerable young Minnesotans, courageous firefighters and police officers and innocent bystanders of all ages who could become victims of someone else’s carelessness.”

Matthew Putnam, a professor in orthopedic surgery and trauma at the University of Minnesota, said there are many circumstances that lead to firework injuries.

“The age of the person, the experience of the person and the time and circumstance are major factors that contribute to injuries,” Putnam said. “If the time is at night and it’s dark out, and the circumstances are that the person is drunk, then there is a higher probability that something will happen.”

Putnam said there are a lot of young children and an increase in young women coming in with firework injuries. However, he said the greatest demographic that came in with injuries was within the ages of 15 and 25.

According to the U.S. Consumer Product Safety Commission, there were an estimated 8,600 fireworks-related injuries in 2010 and three reported deaths.

Putnam said due to a lack of training and experience, some suffer injuries when they don’t use common sense.

Mira LaCous, president of Hollywood Pyrotechnics in Eagan, Minn., which specializes in large firework shows for events like fairs, weddings and festivals and provides services for movie effects, said the state could bring in a large amount of revenue from more firework sales.

“[The state is] missing out on tax revenues, and many people are shooting off fireworks anyway,” LaCous said. “The additional tax revenue could go into safety education for using fireworks.”

Because Hollywood Pyrotechnics has a permit to shoot large fireworks, it wouldn’t have been affected by the bill, but it was supportive of it.

“The most important thing is to keep people safe,” LaCous said. “People need to make sure there is reasonable safety from their house, cars and the audience to make sure no injuries or damages occur.”

LaCous said if large fireworks become legal in Minnesota in the future, people should be required to take a safety course to better understand their dangers and safety techniques that need to be implemented to ensure no one gets hurt.

Putnam said no matter how many precautions are taken, there are always dangers with fireworks.

“If you’re using something explosive, you should expect it to go off,” Putnam said.