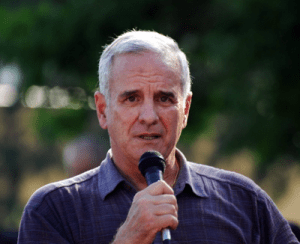 Former U.S. Sen. Mark Dayton received a blow to his gubernatorial plans last week. His campaign messaging has largely revolved around a plan to institute progressive taxes, drawing increased revenue from Minnesota’s top income earners to fill the projected budget gap staring down the state’s next governor. When he presented that plan to the Minnesota Department of Revenue, his tax-the-rich policy proved weaker than expected, drawing in far less revenue than originally hoped.

The Dayton campaign released a revised plan (PDF) Tuesday with new revenue-generating measures and spending cuts in light of the information they obtained last week. The new plan takes in $3.6 billion in new revenue and cuts $1.2 billion in state expenditures. That is still $1 billion less than the projected $5.8 billion shortfall in the next biennium, FY 2012-2013.

The crux of Dayton’s proposal remains the same. Taxes on individuals earning above $130,000 – or $150,000 a year for married couples – will be raised to 10.95 percent, drawing in $1.9 billion in new revenue. The only source of revenue introduced in the new plan is a tax on credit card company profits from interest rates exceeding 15 percent. That measure would only bring in $212.7 million in new revenue for the state.

It appears unlikely that Dayton will propose any other major sources of new revenue for the state. He has stated that he would like to keep the state’s income tax below the highest level in the country (though the 10.95 percent is only .05 percent below Hawaii’s top rate), and in the release for his new plan, Dayton was clear that he would only seek to raise taxes on the richest Minnesotans:

We simply cannot ask middle-class working families to pay more taxes in these tough times. Many families are already at their breaking point. Higher property taxes caused by cuts to local governments, or higher sales taxes on items like clothing or car repairs will hit the middle class and small businesses hard.

The biggest shift in Dayton’s new plan comes in new cuts. In his original budget, Dayton trimmed less than $700 million. Spending cuts were bumped up to $1.2 billion in the new proposal through increased competitive bidding, reforming school transportation and further use of electronic health records, among other policies. The biggest savings comes through additional opportunities for home health care. Per Dayton’s new plan:

Many elderly & disabled Minnesotans could receive better care, in non-institutional settings, at reduced costs. In particular, Minnesota should leverage technology including home-based monitoring systems to ensure that Seniors have the flexibility to live at home while knowing that they will be cared for immediately in the case of a health emergency.

The proposal suggests that increased use of home-based health care could save the state $167.7 million in the next biennium. This plan is similar to many of Dayton’s “cuts” to the budget. He does not propose any true cuts to services that many Minnesotans would notice, instead using government reforms that save money through streamlining the way the state operates. That allows Dayton to run a campaign on not cutting any of the services Minnesotans have come to expect from the state, but with $1 billion left to fill in the budget shortfall, a Gov. Dayton would likely be forced to reduce funding for certain programs.

Though the final figure may come far short of the necessary amount in revenue and cuts, Dayton’s budget plan succeeds in one area where his Republican opponent Tom Emmer failed: providing adequate detail. Dayton’s plan includes figures for each of his proposals, with most numbers verified by the Department of Revenue or other independent organizations.

That is a stark contrast to Emmer’s proposal, which set broad goals for the level of spending in various areas without explaining specific cuts to the projected needs of various programs. For example, the FY 2012-13 budget calls for $12 billion in health and human services spending, while Emmer plans to only commit $9.75 billion in general funds for that purpose. However, beyond not opting in to the early Medicaid expansion, Emmer’s plan consists of vague statements on reducing waste. Some money could potentially be saved through such measures, but it’s unlikely Emmer would be able to make up the gap in budgeting without reducing access or coverage. That problem would be especially acute for Emmer if he wins the gubernatorial race, as he has vowed not to raise the state’s tax rate.