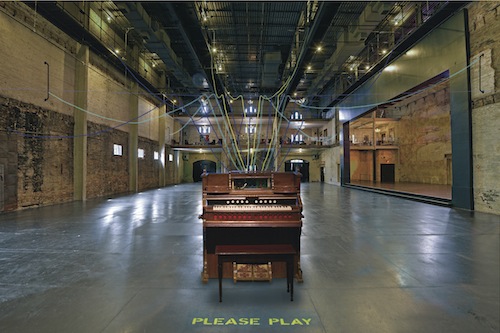 Former Talking Heads frontman David Byrne will be literally turning a building into a musical instrument beginning November 5 at Aria, former home of Theatre de la Jeune Lune, as part of an interactive installation called Playing the Building. The musician, writer, and artist will attach devices to the building’s structure—including metal beams and pillars and heating and water pipes—that cause them to vibrate and resonate, all controlled by an electronic organ placed at the center of the main floor.

Originally commissioned by Färgfabriken, the exhibit premiered in Stockholm, Sweden in October 2005, then was presented by Creative Time at the Battery Maritime Building in New York in 2008 and by Roundhouse in London in 2009.

Building owner Peter Remes thought the concept would be perfect for Aria, which he hopes will be not just a venue for weddings or parties; he aims to “infuse a cultural element into programming and bring interesting cultural ideas to the community,” he said.

Remes bought the building in 2010; it was formerly occupied by Theatre de la Jeune Lune, where he was a board member. He believes the building “should remain a building for the public, for its uniqueness, and the decadence of its architecture,” he said. He hopes that the David Byrne installation will bring in people “from all walks of life, not just artists.”

The 77,000 square foot building, located in the Warehouse District, was originally designed by famed Minnesota architect Cass Gilbert (designer of the State Capitol, among many other landmarks) and constructed between 1895-1995, according to the Cass Gilbert Society. Gilbert added a floor to an existing building and created an Italian Gothic style façade. The building was turned into a theatre for Theatre de la Jeune Lune in 1991, and remained so until the company closed its doors in 2008.

The centerpiece of the installation is a vintage electronic organ, placed in the center of the room. Byrne then installs wires that travel throughout the various floors of the building, attaching themselves to hard surfaces to make sounds that will vibrate or tap. “When you sit down at the keyboard, there will be an orchestra of sound that will be emitting throughout the building,’ Remes said, “It won’t matter if you’re a concert pianist.”

According to Remes, beams and plumbing conduit create various harmonics that will transmit noise as various surfaces vibrate.

The concept falls in line with what Remes calls his day job, which is “redeveloping commercial real estate to bring new life into buildings that have been ignored or left for dead,” he said. “After Jeune Lune closed, it’s really gratifying for me to bring it back to life with Aria, incorporating this cultural programming into the building.”

Playing the Building opens on November 5 at Aria, 105 N. First Street, and runs every day through December 4. Remes said Byrne will attend the opening night event, and there will be additional programming including poetry, dance and music, throughout the month, including educational tours for student groups. See Aria for details about dates and times.