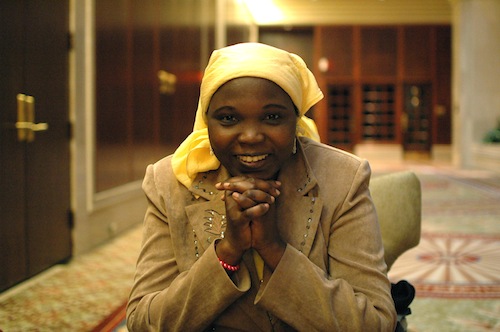 28-year-old Salih was born in a Northern Darfur village called Tina, which in 2003, when Darfuri rebels were fighting Sudanese government forces, was burned and destroyed, with many of the women in the village raped, according to Salih. She was 18 years old at the time, and had just finished her high school examinations.

Her family fled, ending up at Abu Shouk internally displaced persons (IDP) camp in El Fasher, North Darfur, where she encountered many other people from around the region who had also seen atrocities.

“The situation among the children was very bad,” she said. Some had been shot, others had been injured, and some were killed. Many women had been raped, and there was widespread health needs.

Salih didn’t return to University right away. Instead, she spent her time helping others in the camp, aiding women to seek humanitarian, health and psychological services. Even though she had only received a high school education, that was enough to have “awareness”, in order to be able to help others, she said.

Eventually, she went to the University of El Fasher in 2007. She began to take leadership roles, working with the various Non-Government Organizations (NGO)’s , informing them of the different health, education, and environmental needs.

She also began working with the UNDP, a United Nations agency, working in programs that dealt with access to justice, rule of law, violations among women and children. She began informing this agency about the situation that was happening in the camp.

She also worked with the IRC, an American NGO that provided awareness for people about human rights.

Because Salih was working with U.N. officials, giving them information about what was happening and evaluating the security and humanitarian situation among the women and children, she was arrested three times, and kidnapped twice by National Security and taken to detention.

They told her that she was against Sudan, and against the religion of Islam, and they accused her of dealing with foreigners. In prison, she was beaten and tortured. “One day I remember I was being tortured more than 200 beatings,” she said. When she was released, her whole body was covered in bruises. Today, she can’t believe that she is still alive. But the experience, she said, has made her stronger.

Salih is the eldest of eight brothers and sisters. When she first began doing her activist work her mother discouraged her. However, when she was in prison, and many people came to the house to offer condolences to the family, Salih’s mother realized the importance of the work that her daughter was doing.

At her last arrest, the government accused her of being an infidel, spreading Christianity among children. According to the Sudanese press, she was sentenced to death, and labeled as “one of the most dangerous people in the world,” she said. Salih is Muslim, but she believes that there should be a separation of church and state, and that all religions should be welcome.

After she was released from prison the last time in 2011, Salih fled Sudan, and now resides elsewhere in the region, where she continues her activism work. Ironically, the day it was announced that she was to receive the International Women of Courage Award, Awadiya Ajebna, another woman Sudanese activist, was shot by the Sudanese police.

Once, Salih was attending a human rights conference, which was attended by mostly men. Someone asked her if she was a man or a woman. She said she was both. “I am strong,” she said. “I can do all of the duties of the boys.” She doesn’t want to live a “normal” life until the human rights abuses and the killings stop in her country. “Sometimes I think I’m not a human being,” she said. She puts all that has happened to her to the back of her mind, focusing rather on the work that needs to be done.

Daniel Getahun, the International Visitor Leadership Program Manager for the Minnesota International Center, said that Salih and the other award recipients first met in Pittsburgh, and then went to Washington D.C. to receive their award and meet both Hillary Rodham Clinton and Michelle Obama. The women leaders then travelled to different cities throughout the United States, depending on the issues that they are dealing with in their own country. Getahun said that Minnesota was selected as a destination for Salih because of the refugee issues and International policy that organizations are involved with here. After leaving Minnesota, Salih re-convened with the other women leaders in Salt Lake City for a closing ceremony, and plans to return to Washington D.C. to further speak with the Secretary of State and First Lady about human and women’s rights issues in Sudan, according to Salih.

Getahun said that the award was originally given out by Secretary of State Condoleezza Rice in 2007, and has been given annually, honoring 46 women from 34 different countries, according to a press release. The U.S. State Dept.-sponsored International Visitor Leadership Program, facilitated locally by the Minnesota International Center, which facilitated her meetings here in Minnesota, aims to build strong connections with emerging world leaders, he said.