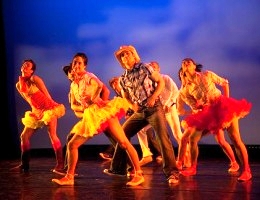 Confusingly, each Zenon “season” is a single evening of dance, repeated for several nights. The current fall season is at the Ritz Theater through November 29, and it comprises five short pieces (including three premieres). Stylistically, the pieces range from the traditional jazz dance of “Here, now that you are gone…” to the tortured torquing of “Filament” to the wild wiggling of “Booba.” Each of the pieces has its own personality, and each succeeds on its own terms.

The “season” opens with Sydney Skybetter’s “The Laws of Falling Bodies,” a tight ensemble piece that’s remarkable in the way it sustains a sense of precarious imbalance; the dancers rise, fall, are lifted, fall again, rise again, and fall yet again. (They’re caught—usually.) It’s followed by “Filament,” a solo choreographed by Emilie Plauché Flink. In “Filament,” the performer begins by slowly extricating herself from a sculpture of mashed metal, then enacts a halting, straining series of movements that suggest there are further, unseen, circumstances from which she would like to extricate herself. At the Thursday night show I saw, dancer Tamara Ober tamped down the boundless ebullience she demonstrated in subsequent numbers and performed the dark “Filament” with taut discipline.

There’s room enough for ebullience in “Not From Texas,” the amiably goofy crowd-pleaser by Megan McClellan and Brian Sostek that closes the program’s first half. Set to a few Lyle Lovett songs, the piece enlists the ensemble in an antic hoedown that begins with simulated horse-riding and ends with couples tumbling atop one another in a scene that might have been inspired by a Saturday night at Cowboy Slim’s.

Judith James Ries’s “Here, now that you are gone…” is introduced in the program notes as a piece about a man who “is drawn further into his memories” of a lost love and “must decide to either remain in the past or to continue on.” There’s no hint of any such tension until the end of the piece, which is largely a graceful duet between the elegant Mary Ann Bradley and Gregory Waletski, whose open grin, catlike agility, and bald head may remind you of Jim Lichtscheidl.

The lithe Leslie O’Neill is the standout in “Booba,” an extract from an Andrea Miller piece set to music by Balkan Beat Box. The Zenon dancers are so comfortable with the physically demanding (I’m guessing) choreography that they convincingly convey a sense of wild, jittery abandon. It’s a treat, as is the entire evening.