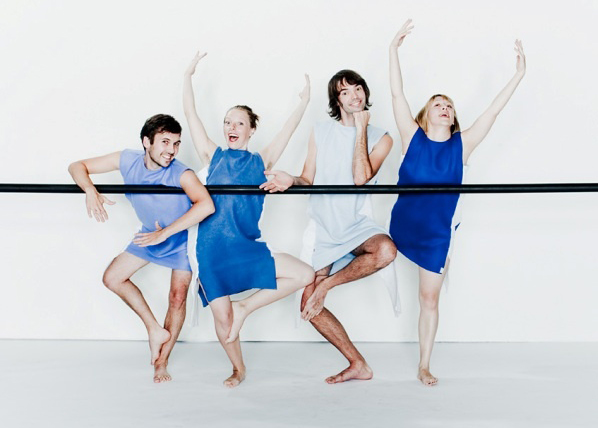 Sometimes, contemporary dance growls and barks at you. Other times, it wags its tail, jumps up in your lap, licks your face, and pees on you a little bit. Saturday night at the Walker Art Center, there was more of the latter than the former.

The Choreographers’ Evening is a tradition dating back 38 years; on stage at the McGuire Theater, this year’s curator Susana di Palma explained that the tradition of having two performances on the same night originated in the very first year, when the show sold out and there was an impromptu reprise for the fans who couldn’t see the formal presentation. The evening showcases a curator’s selection of local dancemakers, and this year’s crop was exuberant.

The evening began with Whitney McClusky and Fodé Bangoura’s La Ronde des Sons, and when the curtain rose on an adorable little girl dancing joyfully to the rhythm of African drums, I imagine 90% of the audience grinned from ear to ear and 10% reached for whatever prescription medication they had at hand. The high-energy performance set the tone for an evening of fun and frolic.

Next up was James Sewell, who performed his piece Bodypuzzle: a composition that had him making geometric movements that differed first between two hands, and later between hands and feet. Before beginning the performance, Sewell encouraged us to try a couple of bodypuzzles with our own hands, so we could properly appreciate what a badass he is.

Third were Giselle and Dario Mejia of Curio Dance, whose Search for Country was a lithe and literal piece that had them enacting “the core universal life experience of the immigrant displaced by deprivation or natural disaster and the desire for a better life,” as the program notes put it. Hands at their eyes as though holding binoculars or trying to telepathically divine a direction home, they searched—and, seemingly, found.

It’s not often the Walker presents dance companies that also perform on Nicollet Mall, so Anthony Clark and Trika Pruitt of the Christ UP Dance Crew were welcome additions to the program. Their piece Christ UP Movements wasn’t the most exciting or inventive hip-hop choreography I’ve ever seen, but Clark and Pruitt are strong performers who were tighly rehearsed, and I’d be very interested to see the entire troupe perform sometime.

That said, SuperGroup’s piece was fun and funny, which made them a very unfortunately tough act for Paulino Brener to follow with his Credo, a slow and somber solo piece based on traditional Argentinian dance. By the time it sank in that Brener’s gaucho pants were going to remain tightly sashed, his turn was over.

BODYTALK came next, with the tango-flavored, playfully improvised Cross-Pollination. It was a palate-cleanser for Jim Lieberthal and the FootHolds Project, whose Blue Channel Rivulets (“inspired by dolphins”) approximates the fantasy ballet from Rogers and Hammerstein’s unwritten musical about the unknown genius who invented The Worm.

John Munger (one of the Daily Planet’s Fringe bloggers) presented Trayage, a solo composition that has him sitting at a desk in a spotlight. He explained at the piece’s outset that he was presenting the performance as an answer to the question “What is dance?”, which the silly choreography made clear he regarded as a silly question.

For She—A Little Found Object is the title of the piece presented by Carl Flink and Black Label Movement. As the sole performer, Julie Brant McBride was enormously expressive in a flurry of angsty, abrupt movements lit dramatically by handheld spotlights in a scheme designed by Marcus Dilliard.

Peter O’Gorman’s clever Serif had O’Gorman, Joe Chvala, and Karla Grotting whipping brushes through the air to create a soundtrack to their own movements. The piece was more a delight to the ears and eyes than to the brain or heart, but the heart was well-represented by Alanna Morris, whose electric solo piece Dreams was fearlessly and passionately performed by the choreographer herself.

The evening’s concluding performance was The Evaporation of Time, an ensemble piece created by Luke Olson-Elm and performed by Olson-Elm with five powerful dancers who twisted, turned, and crawled into and out of a rectangular block of light at center stage. The piece was moving and involving despite the fact that the Michael Giacchino music accompanying it evoked images of Daniel Day-Lewis, tomahawk in hand, standing in front of a waterfall.

Overall, the 38th annual Choroegraphers’ Evening was a welcome—and very accessible—bouquet of performances showcasing some of the area’s many talented dancemakers.