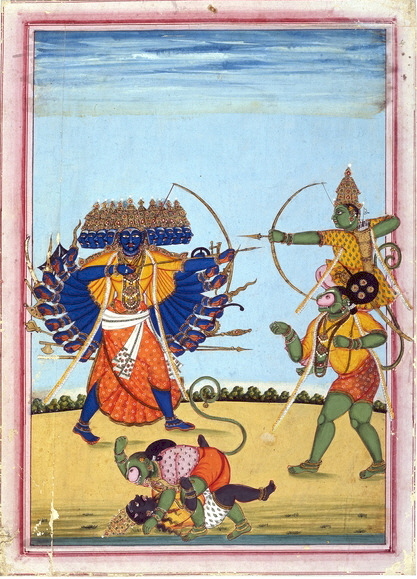 Rama and Hanuman fight Ravana in an 1820 illustration

Dhvee (Duality), a music/dance performance making its world premiere at the Walker Art Center this weekend, is a bicultural collaboration between Minneapolis’s Ragamala Dance (India) and Çudamani (Pengosekan Village, Bali), but the analogy that occurred to me as I watched the epic drama unfold at the Walker’s McGuire Theater was a distinctly Western one: I felt as though I were peeking into an Easter egg at a tiny, lovely diorama.

The Ramayana, the ancient story told by the production, bridges Indian and Balinese cultures: it originated in India but has been what the program notes call “a defining narrative” of Balinese Hinduism since roundabout the sixth century. Given that the original Sanskrit rendition fills seven books with 24,000 verses, condensing it into a 75-minute dance is kind of like adapting War and Peace into a haiku. The program recaps the story—but in a total of seven sentences, so the uninitiated are still apt to be in a bit of a fog. That’s fine: you get the idea. A princess is taken captive, there’s a battle, she’s rescued. If you don’t leave the theater entirely conversant in how the story illustrates “the cyclical relationship between man and nature, human and divine” (again, per the program), so be it.

The choreography combines Indian classical dance with Balinese dance, some characters in the narrative represented jointly by an Indian dancer and a Balinese dancer. The two cultures’ musical traditions are represented by a South Indian classical orchestra at stage left and a Balinese gamelan at stage right. Original music was composed for both ensembles for this production, and the synthesis is seamless. You’re not going to see much more craft and scholarship packed into such a concise production any time soon.

Both the challenge and the appeal of any classical tradition—think Western classical music, or classical ballet—lie in its practitioners’ commitment to enacting (at its best) profound expression within a strictly circumscribed vocabulary. Performers are called upon to be both transparently expressive and dauntingly precise, and the Ragamala/Çudamani dancers are indeed both of those things…especially, precise. The choreography requires many quick transitions between postures held still for moments or longer; the effect could be stiff or robotic, but these performers are lithe and fluid. It’s amazing to watch.

There are no onstage props, but subtle lighting on the backdrop scrim is used to evocative effect, and the forest sounds and mist that greet the audience are a nice touch. The performers’ colorful costumes are more than adequate to set the scene, especially in the opening forest scene, with a human copse of trees dancing in unison. Dhvee is a special production, and you’d do well to take the opportunity to enjoy one of the three remaining performances in this premiere run.