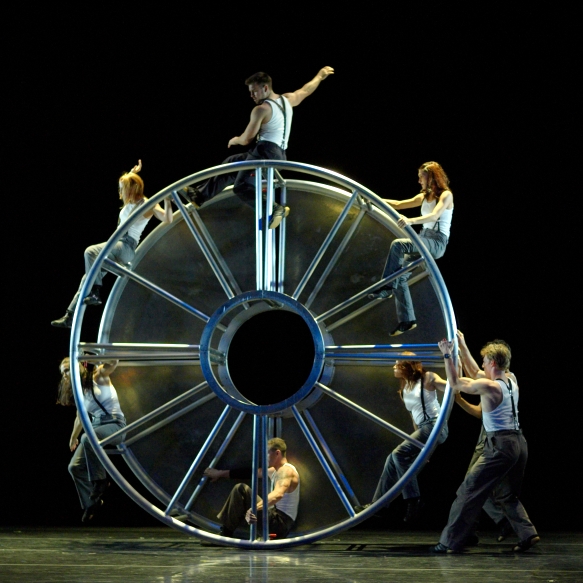 I love it when dance makes relevant commentary on modern society. Diavolo, the company that performed at the Ordway Thursday evening, was mesmerizing with evolutions of imagery captured in the program notes with phrases like: “transcend disconnection and xenophobic tendencies”; and “the transcendence of the human soul against all odds.”

Founding artistic director Jacques Heim pointed out in a pre-show discussion the recurring theme of his dance company’s works. Within the architecture of the modern urban environment, what will survive: man or machine? Heim founded Diavolo in 1992, calling Los Angeles home. He choreographs in collaboration with dancers he described as needing to be gymnasts, actors, athletes and acrobats, in addition to being well-versed in ballet. The collaboration begins with a group of engineers who design oversized, surrealistic objects for use on stage. The dancers explore the interaction of the human form with the onstage architecture. After an intense series of improvisations, Heim sorts through the ideas generated to create the final work.

Heim’s work focuses on icons that symbolize the human relationship with technology. A list of the objects found on stage conveys the spirit of Thursday night’s performance: a stairway, a door, a bench, a teeter-totter and the wheel. In Tete En L’Air, people with suitcases and briefcases frantically go up and down a huge flight of stairs. The dance company of fifteen did well recreating the surreal imagery of French filmmaker Jacques Tati. People, their heads in bird cages, tried to kiss and headless bodies in canvas bags rolled down the stairs like giant slugs. Eventually, people inhabited the stairway, going in and out of tiers of entrances and exits like adobe cliff dwellers.

Knockturne was the anomaly of the night’s revue. A duet between lovers, it was the only dance without the full company on stage. Omar Olivas and Chisa Yamaguchi were extraordinary as they portrayed flirtation and romance around and through an ever-present door. The Bench was quite humorous, reminiscent of the work of Stomp—not in the creation of aural rhythms, but in the creation of patterns using an everyday object. Trajectoire, the finale, could be a tribute to the Titantic, with the dancers rearranging patterns on an ominously tilting deck. The playfulness of the dance movements also brought to mind the work of Polobius.

The best piece of the evening was Humachina. It featured a twenty-foot-tall wheel that resembled a ferris wheel. The dancers, in movements similar to those seen in Cirque du Soleil, jump on the wheel, ride it as it rolls across the stage and jump sometimes twelve feet into the air before being caught by teammates. It is impressive how an ongoing cycle of changing kinetic imagery can hold one’s attention without any bombs, flames, or gunfire.

The significance of Diavolo is as much in their process as their works. To this company, dance is an exploration, not a set of timed steps. Their creativity is an act of self-liberation, discovering that modern society generates cascades of images that, optimistically synthesized, provide the transcendence we seek.