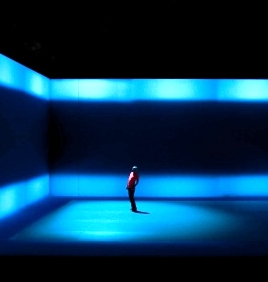 Instead of explaining what Saburo Teshigawara is up to in Miroku, his solo piece being performed this weekend at the Walker Art Center, perhaps I should defer to artist himself. From the program notes:

“Rather than art or art methodology springing from conventional ideas established through history, we hope to act with our own methods with respect to still hidden possibilities.”

Okay, that’s a little vague…how about this? In an interview, Teshigawara says he had…

“…the idea of trying to approach movement by first making the body empty and ‘feeling from within the [empty] body.'”

Got it? Still not so much? Okay, try this.

“Dance is not a form for the purpose of communicating information. What is important with dance is whether it is alive or not.”

Now we’re getting somewhere. Miroku does not communicate any information, but it is certainly alive.

Teshigawara, in his late 50s, is a lithe, electrifying performer who is seen as “post-Butoh,” Butoh being a Japanese form of modern dance. In other words, he’s post-modern. In Miroku, the performer/choreographer’s movements incorporate elements of genres from jazz to tap to hip-hop, but performed in an almost frantic manner. The overwhelming mood of Miroku is that of desperation and struggle; it’s as though the performer has lost control of his body and is being forced by an evil wizard to dance himself almost to death. Unless you’ve seen the piece before, you’ve never seen anything quite like it.

The piece incorporates movement, lighting, and music in a complete synthesis. The stage is surrounded on three sides by flat white screens, completely boxing Teshigawara in. The screens change hue and brightness in blocks and lines as lights are trained on them; on a couple of occasions, previously invisible doors open, then quickly and silently shut again. The stage and lighting design, along with the throbbing musical score by Teshigawara, Neil Griffiths, and Kei Miyata, places the dancer’s movements in a context that defines their significance much more completely than is the case with a typical dance performance.

The result is completely entrancing, despite the fact that the piece has only the wispiest hint of a narrative. There are some performers who are so captivating you simply cannot look away. Teshigawara’s performance has that quality, and despite the fact that his character often appears to be in agony, it’s clear that the artist is exercising a masterful control over the entire shape and feel of the piece.

That control becomes literally manifest in a scene where an extremely bright lightbulb descends from above and Teshigawara moves his body around it, his movements amplified and distorted by the shadows cast on the towering walls. Really, captivating an audience of seasoned culture vultures is not that much different than entertaining a child: the simplest tricks are usually the best.