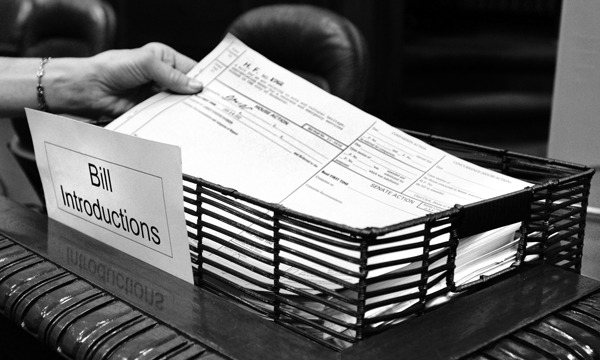 A basket for newly introduced bills is located on the front desk in the House Chamber. (Photo by Andrew VonBank)

Reagan and Will Zellers, the daughter and son of House Speaker Kurt Zellers (R-Maple Grove), gaveled the House to order for their father Jan. 24. Waiting to be brought into the process for consideration by the House were

162 bills. And thus began the road to law for some, and for most, to die at the end of session.

Introduction of bills is a key moment in the legislative process. It all begins with House members signing on as sponsors of a bill.

After a bill is formally recorded in the House Journal, the sponsors ferry bills through committees hoping for consideration by the House. Additionally, the bill sponsor needs to find someone to sponsor a companion bill in the Senate. This is a key role to a bill’s passage because Senate committees can hold hearings on its version of the House bill. That increases chances of swift approval by the full bodies and a hopeful landing on the governor’s desk for action.

If the language of the bills differ after approval by the respective bodies, a conference committee made up of both House and Senate members must agree on a single version. After that, the bill is returned to the full House and Senate for floor votes before referral to Gov. Mark Dayton.

Simply rounding up sponsors for a bill does not guarantee passage. For example, during the 2011 regular session and special sessions, just 106 of 1,788 introduced bills were enacted.

Among this session’s first-day bill introductions are HF1809, which would appropriate funds for electronic barriers designed to halt the advancing Asian Carp; HF1807, which would provide $4 million to build a wind turbine training facility in Canby; and several bills related to a new stadium for the Minnesota Vikings.

Sponsored by Rep. Steve Drazkowski (R-Mazeppa), HF1891 would make the Minnesota Public Utilities Commission consider local land use restrictions before sites for wind turbines are approved. If passed, it could force the PUC to reconsider a wind project it has approved twice: Goodhue Wind, a $179 million wind energy development originally proposed by Minneapolis-based National Wind.

Rep. Karen Clark (DFL-Mpls), whose district is home to a large Somali population, sponsors a resolution supporting the Somali-American community’s ability to continue remittances to the Horn of Africa.

Several bonding bills were in the first wave of bills, including requests for Interstate 694 interchanges with White Bear Avenue and Rice Street and more than $4.3 million for preservation at the Minnesota State Academies in Faribault.

Rep. Leon Lillie (DFL-North St. Paul) is sponsoring HF1790, which seeks up to $2 million for preliminary and final design of the I-694 interchange at White Bear Avenue. That bill’s Senate companion, SF1489, is sponsored by Sen. Chuck Wiger (DFL-Maplewood).

The I-694 interchange at Rice Street is the proposed beneficiary of HF1802/ SF1484. Sponsored by Rep. Linda Runbeck (R-Circle Pines) and Sen. Roger Chamberlain (R-Lino Lakes), both bills seek $5.2 million to complete final design of the interchange.

$4.3 million in state bond proceeds to refurbish the Minnesota State Academy for the Deaf campus in collaboration with the State College of Carpentry in Faribault. The bill did not have a Senate companion as of Jan. 25.

Other bills of interest include a measure sponsored by Rep. Greg Davids, (R-Preston), to sell $15 million in state bonding to design and build a Minnesota Veterans and Emergency Services Museum in Rochester.

Rep. Mark Murdock, (R-Ottertail), introduced legislation seeking more than $4.7 million in bonding to design and build a community center and swimming pool to replace facilities destroyed by a 2010 tornado.