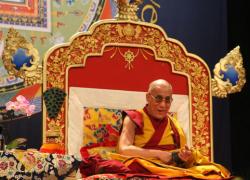 This past weekend the 14th Jetsun Jamphel Ngawang Lobsang Yeshe Tenzin Gyatso Dalai Lama, also known as His Holiness the Dalai Lama Tenzin Gyatso, came to Minnesota with a message of ‘One Heart, One Mind, One Universe’.

TAFM held an official welcome for the Dalai Lama on May 8, with a “Medicine Buddha Empowerment” initiation, a cultural ceremony designed to promote personal and societal healing. The Dalai Lama spoke that afternoon in a public address on the topic, “Peace Through Inner Peace,” in addition to appearing before the Second International Tibetan Medicine Conference: Healing Mind & Body, a conference on Tibetan medicine and spirituality.

The Dalai Lama said in his Sunday afternoon address that he has visited four America universities now that have launched a Tibetan Healing Initiative much like his own Tibetan Medical Institute of His Holiness in Dharmsala, India.

Thupten Dadak, a founder of the TAFM, said the Sunday event was well-received, with about 6,000 tickets sold. The Saturday evening program drew more than 8,000 participants. 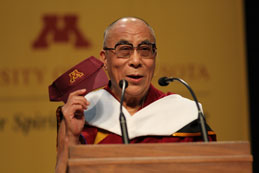 “We were very happy,” said Dadak.

According to Dadack, His Holiness said the Institute’s (www.dalailama.umn.edu) work pleased him and that he would be back to look into their work and progress in blending Tibetan healing with conventional health practices and integrating Tibetan practices into regional clinic and hospital settings.

Nancy Dadak of Gyuto Wheel of Dharma Monastery, the wife of Thupten Dadak, states that it is a Buddhist practice for amplifying your healing abilities, and that the practice is to support your health. She goes onto quote His Holiness as saying that you can’t expect to heal all your ills by a saying a couple of mantras.

Dadak said that Tibetans would continue to reach out to Chinese people to help for the safe return of the Panchen Lama, who was kidnapped at the age of six by Chinese authorities claiming to be protecting him. He would be 21 years-old today but has not been heard of since he disappeared with his family. 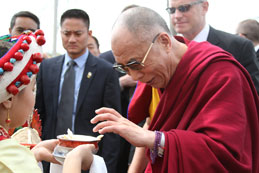 University of Minnesota President Robert H Bruininks and Board of Regent’s Chair Clyde Allen on Sunday conferred the Dalai Lama with an honorary Doctor of Humane Letters “for inspiring the world to achieve the humanity’s fundamental desire for happiness, freedom and peace.” His Holiness’ bowed to allow Dr. Bruininks to present him with a University of Minnesota visor cap, which he then wore for the entire address.

In recent news it has been revealed that the Dalai Lama is retiring from politics.

Jigme Ugen, President of Tibetan Youth Congress, states, “We have been supportive of his Holiness decision to retire from politics”.

The process to the Dali Lama stepping down from his role as the political leader has been a long process.

His Holiness was both the head of state and the spiritual leader of Tibet, until recently he stepped down from his political role. As Lobsang Sangay was elected as the new Prime Minister for Tibet, the government in exile.

“At the same time His Holineess remains an adviser to whomever is elected as leader,” Thupten Dadak added.

As for the changing role of His Holiness following the recent announcement of his retirement as head of state, Nancy Dadak said it is important to put that decision in historical context. The Dalai Lama has held this leadership role for life since the 16th century.

After 300 years of ruling under the Dalai Lama, the 14th Dalai Lama has decided that he wants Tibetan to operate under a purely democratic system. He will remain the spiritual leader as the 14th reincarnation of the Buddha of Compassion.

“The Dali Lama has always stated that he is a simple Buddhist monk, said Nancy Dadak.  10 years ago he made it clear that he wanted a democracy, a Prime Minister to take over this role.  And since then he has been establishing a democracy.  So it is not a shock at all that he is retiring.  For the Tibetan community it has been maturing process.  He has held our hands as we have gotten use to the idea of him being only the Spiritual Leader for Tibetans, which he always will be because he is the Bodhisattva of Compassion.”

Tibetans want the Chinese people to know that not only Tibetans want their country back, with some sort of autonomy and the Panchen Lama returned, said Thupten Dadak. Human rights organization and people around the world think this is justice for Tibet as well.

“We are very much happy to see the common Chinese slowly understanding who the Dalai Lama is rather than what the Chinese hardliners are telling them,” he added.

As for his health, Thupten Dadak said the Dalai Lama, now 76, appears healthier than he has in years and that Tibetans are pleased that he will likely live long enough to watch the community in exile shape the government under the democratic system he created.

His Holiness was very pleased with the progress of the Tibetan Minnesota community. He was particularly pleased that the first generation of youth raised here that are now entering college have learned American culture while at the same time held to their own traditional values, culture and faith in this modern American life outside of the Tibetan community in India.

“His holiness was very happy and that if we keep this continuity then he would come back again,” he said.

The Tibetan community shared equal responsibilities with the University of Minnesota’s Center for Spirituality and Healing with ensuring the visit of His Holiness was well promoted and successful.  The community handled the preparation of the alter and throne for the traditional teaching events.