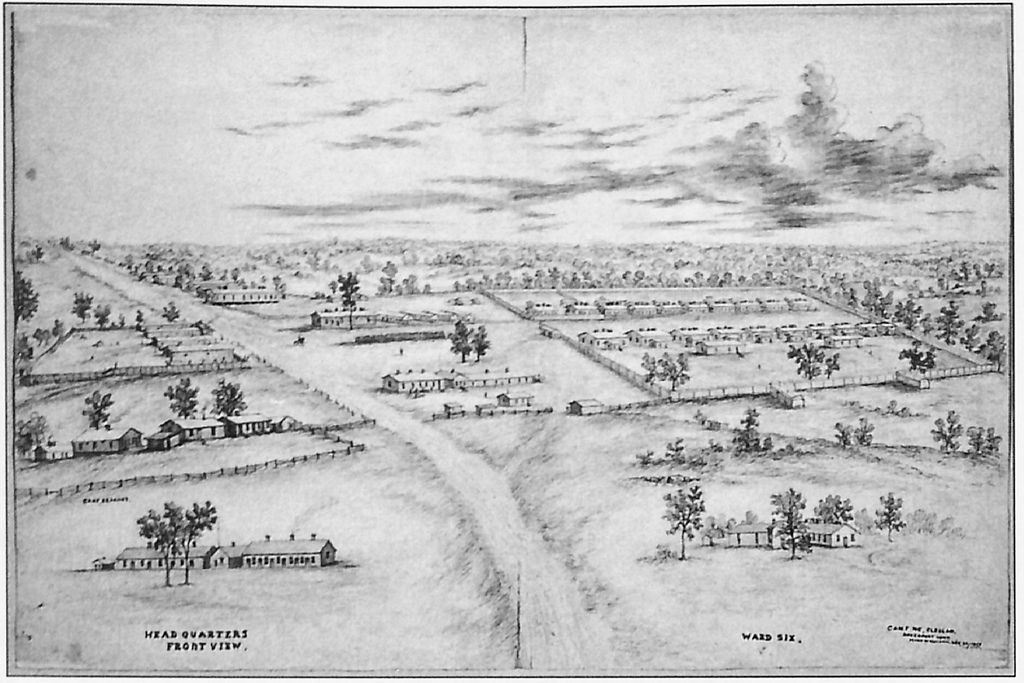 An 1865 drawing of Camp Kearney at Davenport, Iowa. The Dakota prison can be seen at top left. Courtesy Minnesota Historical Society.

After seeing Django Unchained, I wrote about how slow Minnesota has been to see the plank in its own eye when casting judgment on the cruel history of slavery in the south. Dakota and other Native inhabitants of our land were treated brutally during westward expansion, and that treatment precipitated the deadly Dakota War of 1862—perhaps the darkest moment in our state’s history.

That sad history has been steadily coming to light, and the Minnesota Historical Society Press is making an important contribution to that process with the publication of The Dakota Prisoner of War Letters (Dakota Kaskapi Okicize Wowapi), a compilation of 50 letters written from the Iowa prison camp where 270 Dakota men were imprisoned from the war’s end until they were freed by President Andrew Johnson three years later. The letters are presented both in the original Dakota and in English translation.

For all its historical importance, this is not a starter volume for those who know little of the war. Its greatest value—both to historians and to the causal reader—is in illuminating the complexity of these men’s lives. Neither blameless victims nor evil criminals, these were men who were caught in a terrible situation and who did what they felt they had to do for their families and communities.

The letters contain much evidence of regret, which is natural since almost all of them were written to a missionary—Stephen R. Riggs—who was in contact with U.S. authorities and had some sway in influencing the men’s fates. This was not the place for these men to express their anger, which was doublessly profound. Still, as the men describe the circumstances of their participation in the conflict, it becomes clear that there were many ambiguities in the way the war was fought. Some had guns, but no gunpower. Some shot, but missed. Some had no guns, but were accused of firing.

The letters also reveal complexities in the men’s relationships with the European settlers and among themselves. Dakota had been in contact with white settlers for decades, and for all the abuse and exploitation, there were also friendships and mutually profitable business partnerships. Further, there were dramatic political and personal rifts among the Dakota; these letters reflect that the Dakota did not speak with one voice any more than the newcomers did.

Though these letters are short and businesslike rather than reflective and poetic, there’s a haunting resonance to the rhythms of the Dakota language as sensitively translated by Canku and Simon. Some of the letters, with their regular repetition of the Dakota word do—”it is so”—read almost like prayers.

So from what side were you standing, he asked—it is so. Yes, I said I was standing from the prairie side—it is so. Yes, he said, did you shoot a man from the left side of the wagon—it is so. Yes, it was a long distance, so I held the gun above him and shot twice—it is so, I said. But I said that I didn’t have any gunpowder left, and I was telling the truth—it is so. But they were not fighting, because they left for where the Ojibwe live. They allowed us to leave, so we went, they fought afterward—it is so. when we came back, the Mdewakantonwan escaped to Yellow Medicine and camped there, then we came home—it is so. They said, now they will go and fight again, and if anybody didn’t join with them, they would kill them, they said—it is so. Therefore, I took part in the battle, and now I’m suffering greatly for it—it is so. Truly Passes On, this is me—it is so.