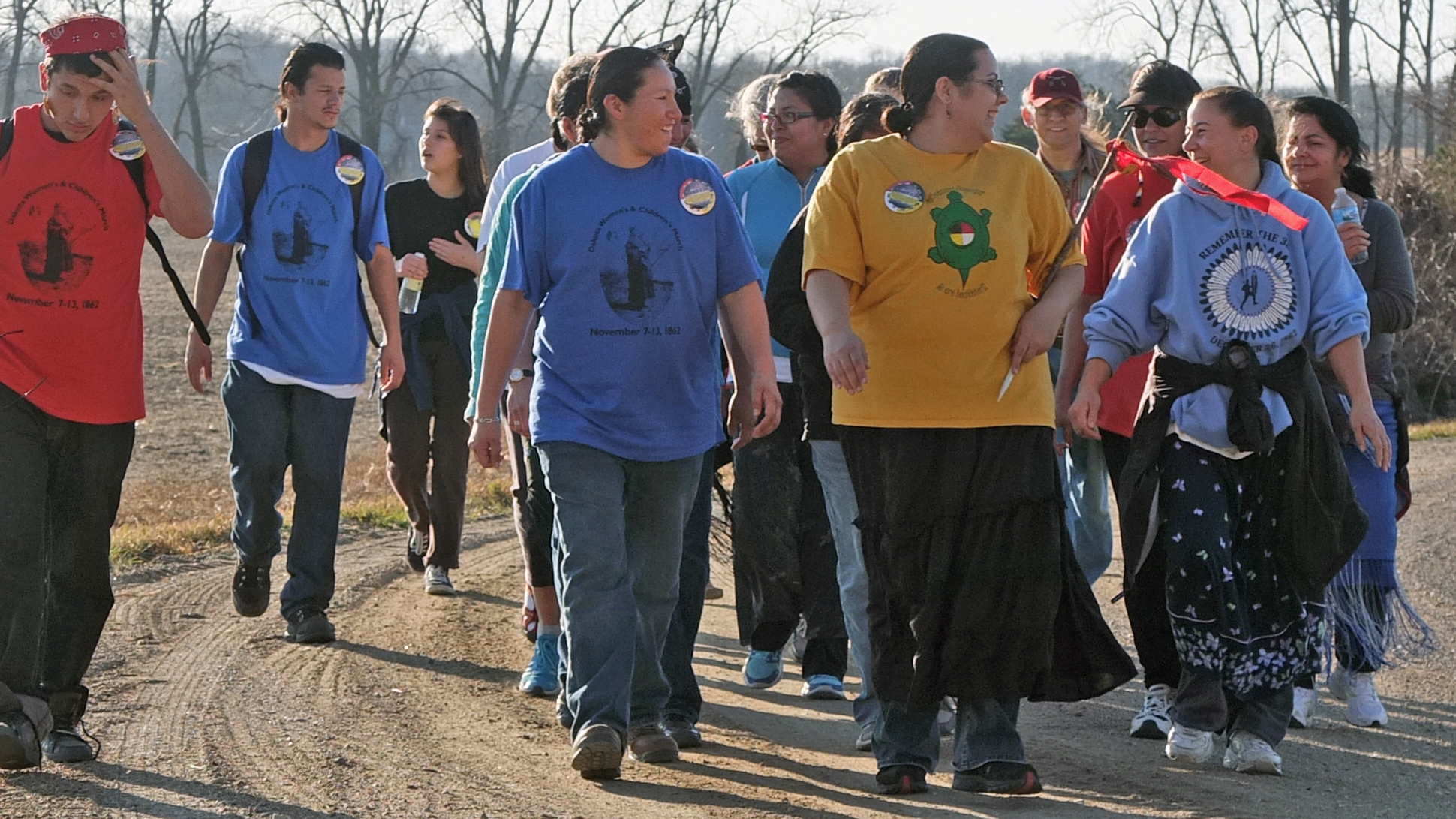 On an unseasonably warm November Saturday, participants in the 2012 Dakota Commemorative Walk traveled from their lunch stop at the Treaty Site History Center, just north of St. Peter, toward Henderson. The grass at the side of Highway 169 was drained of color, dry and crunchy underfoot. A steady hum of traffic shot by the procession of marchers and slow moving cars on one side while the Minnesota River was visible on the other. On the horizon, bare branches of oak and cottonwood trees stood out against blue sky. 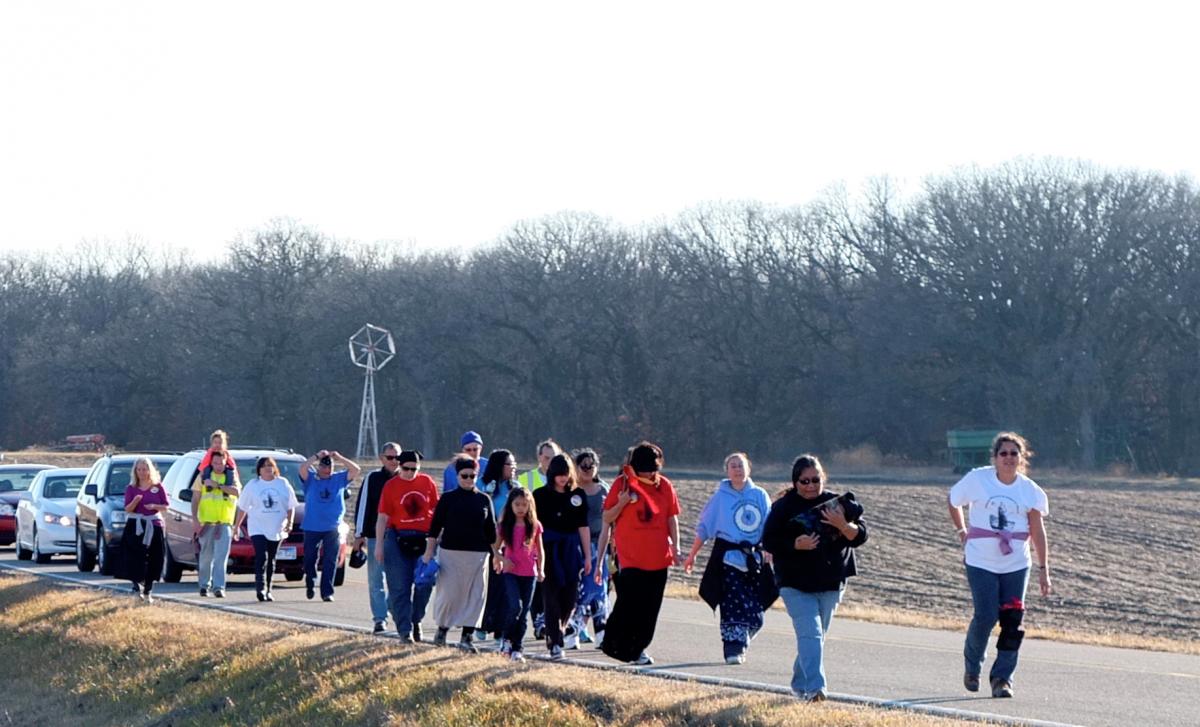 The Dakota Commemorative Walk remembers and honors the 1,700 Dakota women, children and elders who were forcibly marched 150 miles by U.S. military troops from the site of the present-day town of Morton to Fort Snelling. Following the battles of the 1862 Dakota-U.S. War, 303 Dakota men were arrested and awaited trial. Meanwhile, an indiscriminate sweep of Dakota communities resulted in another approximately 1,700 Dakota people, who had not participated in the fighting and had surrendered at the end of the war, being removed from their homeland.

The destination for the 1,700 was a concentration camp located at Pike Island, part of Fort Snelling. Along the way, the captive women, children and elders were assaulted by angry townspeople and soldiers; an unknown number of them died. That winter, 38 Dakota men were hanged in Mankato. Approximately 300 people died from brutal conditions in the concentration camp. [For a more detailed look at this topic, read Sheila Regan’s 2010 article, Trail of treaties: The U.S.-Dakota War of 1862.] 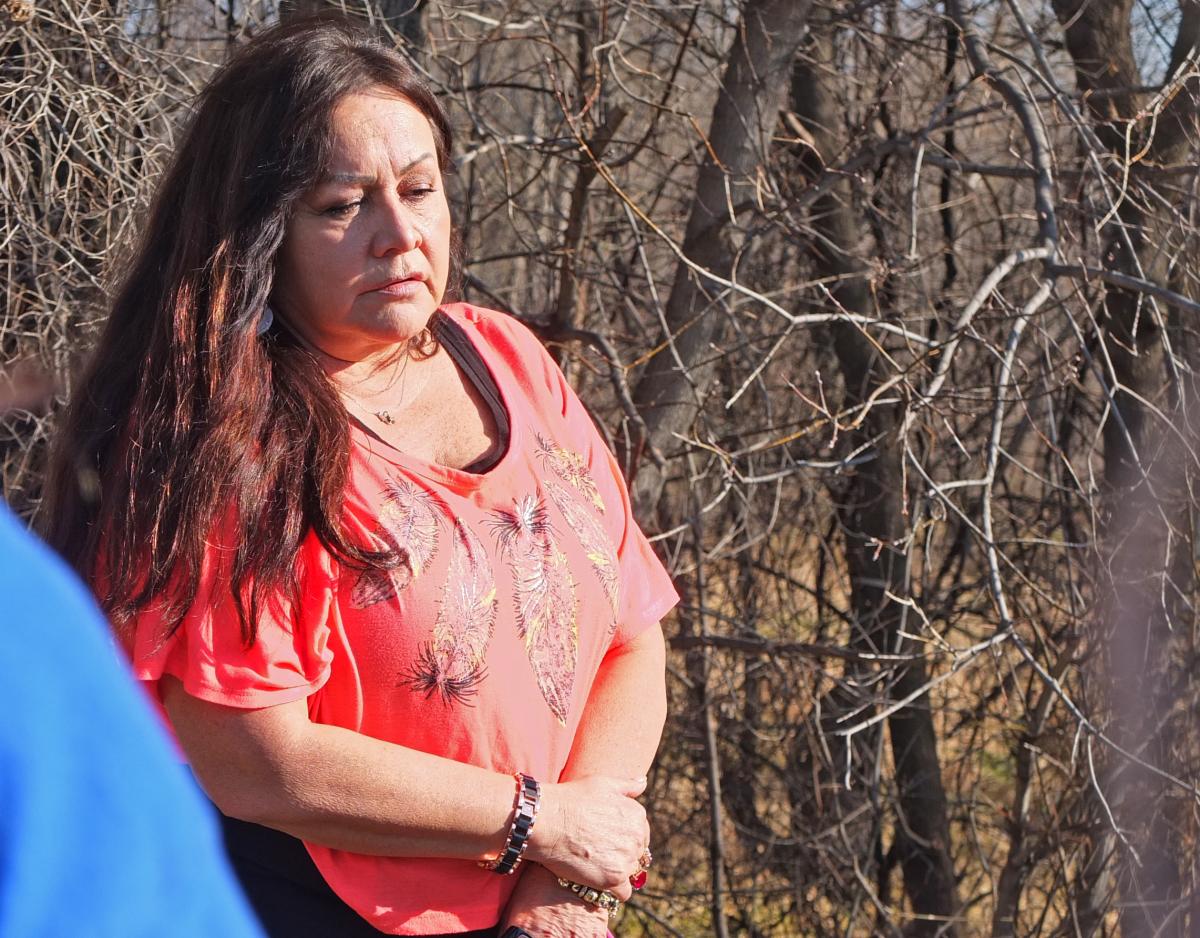 A relative speaks about her ancestors

The 2012 walk started November 7 at the Lower Sioux Agency Historical Site on Highway 2 near Morton. Every mile, the walkers come to a stop and gather to plant a prayer flag, a dogwood stake tied with red cloth and a leather ribbons bearing the names of two Dakota families who made this march 150 years ago. One of the group’s leaders holding a leather bag of tobacco sang a prayer song while participants filed by, taking a pinch to offer along with prayer. Organizers describe the walk as spiritual, sharing values with the Wokiksuye 38+2 Horse Ride, portrayed in the film Dakota 38, a healing journey that begins in South Dakota and arrives in Mankato on December 26, the anniversary of the execution by hanging of 38 Dakota men.

There is no record of the route the captives marched, but it has been reconstructed by piecing together fragments of historical record, personal memory and guesswork. According to Mary Beth Faimon, who worked with others to devise the first walking route in 2002, railroad tracks were most likely followed because they connected towns. “They made a point to bring the prisoners through the towns so they could have a spectacle,” she explained. Today’s route has changed somewhat to ensure safe roads for the walkers. “The point is that it’s all Dakota land — wherever they walk, it’s in the footsteps of their ancestors!” said Faimon.

The lunch stop at the treaty site had particular significance for the walkers. It is the place where the Treaty of Traverse de Sioux was signed in 1851. According to materials at the Treaty Site History Center, the Dakota ceded “24 million acres…nearly forty percent of what we know today as Minnesota” to the U.S. government. Treaty negotiations were fraught with deceit and the Dakota people were pressured to radically change their way of life as European settlers flowed into the region.

One of the walkers, Chris Mato Nunpa, greeted the lunch crowd and offered a comment on the history of the Treaty of Traverse de Sioux, ”It’s personal,” he said. “I’m bragging about one of my relatives. His name was Een-yang-ma-nee, Running Walker, and his son Running Walker Boy…was the one who gave me my Dakota name…That’s why I like this place here; I hope his name is mentioned here. I hope they know that Een-yang-ma-nee was the first signature on that treaty that involved 24 million acres here in southern Minnesota. It’s one of those examples of legalized land theft that the United States did with many of our peoples and certainly they did with the Dakota people.” His comments brought chuckles but also many heads nodded soberly when he added, “I want to brag about my relative Een-yang-ma-nee, Running Walker — that, too, is rather a dubious honor. All it means is, when he signed first, he was the first guy to get screwed by the United States government.”

The food was purchased from the St. Peter Food Coop with donations from the Gustavus Diversity Center, Building Bridges, and Office of the Provost,  and was served by students and Kyle Momsen, a staff member, from Gustavus Adolphus College. Momsen explained that some of the students had participated in a January Interim Experience course about the war. The class produced an exhibit, Commemorating Controversy: The Dakota – U.S. War of 1862. It’s a collection of 12 panels that explores the war’s history, events, and consequences.  It has been on display at Winona State University, in Washington D.C. at President Lincoln’s Cottage and is currently on exhibit in the Twin Cities at the student union at Augsburg College.

One of the students at lunch who joined the walkers afterwards was Alex Christensen. He describes the J-term class at Gustavus as “the best academic decision I have made in my life, easily.” Christensen shared that it had motivated him to dig into his family history where he learned about his own family’s involvement, “I had a great-great grandfather who was involved in the punitive expeditions after the war and so — it’s been a journey, certainly. It’s motivated me to get involved in these types of things.” 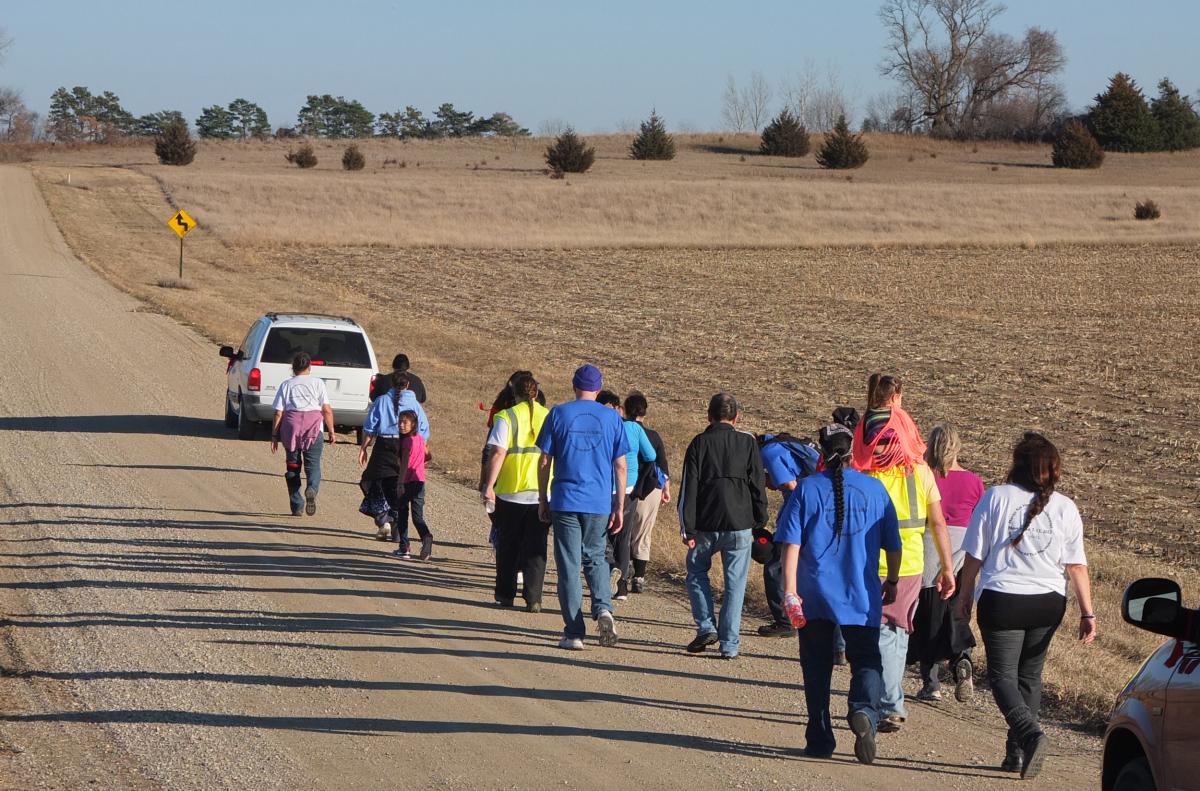 Casting long shadows on the walk to Henderson

The walk is organized by Cansa yapi Otunwe (Lower Sioux Indian community) women. They walk in front of the procession carrying a Chanunpa (a ceremonial pipe) and direct the planting of the stakes and the ceremonies. Faimon described how, years ago, in planning events for the sesquicentennial of the Dakota-U.S. War, women took on the charge of doing something to remember the 1700 women children and elders, who seemed to have been forgotten. She observed, ” They suffered three separate genocidal events: the forced march, the cold winter and then deported on cattle boats to who knows where? These women endured and sacrificed so that these people walking could be here today and start a cultural revival — in language and cultural activity and values.”

Gabrielle Tateyuskanskan, one of the leaders of this walk, said that this history of persecution has thrown up barriers for Dakota people. The walk is a reminder that those events and those times are “not so far away and we are still dealing with a lot of social justice issues that are the legacy of the internments.” She points to high suicide rates for young Dakota and low rates of graduation from high school. She said, “The irony is that we need them [Dakota youth] as social capital.” Despite a lot of loss and hardship, Tateyuskanskan describes the Dakota Commemorative Walk as a way to take possession of Dakota spiritual life, “The only sacred land we have is the one we create.”

The walk has found support from other faith organizations. Tom Duke from the Saint Paul Interfaith Network was part of the walk on Saturday. His organization has joined in discussion of future actions. They have created Healing Minnesota Stories, a resource for congregations and other communities to “to participate in this healing work, through tours, dialogue events and a speaker’s bureau.”

As the events of the sesquicentennial draw to a close, Tateyuskanskan said there is a big question. Now that so many of the exhibits and events have raised awareness for Minnesotans, “What are you going to do about this history?” 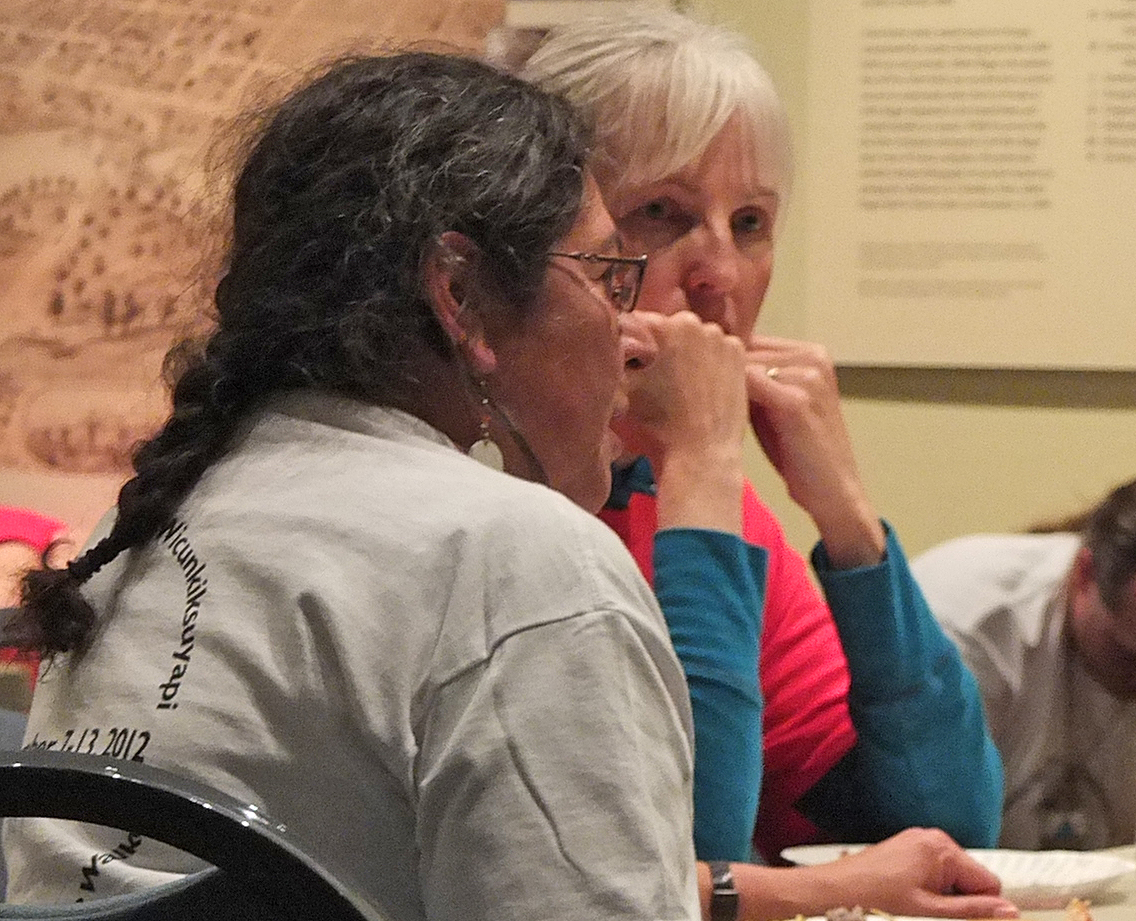 Read about the walk in the words and pictures of Dakota people in The Footsteps of our Ancestors, edited by Waziyatawin Angela Cavender Wilson. Diane Wilson’s Spirit Car, a One Minneapolis, One Read selection this year, tells about the first-ever 2002 Dakota Commemorative Walk.

The final day of the walk will be November 13. Participants will travel from Bloomington to Fort Snelling State Park. A ceremony to honor the ancestors will begin around 12:30. A closing feast will be held at St. Bonaventure Catholic Church in Bloomington. For details: http://2012dakotamarch.eventbrite.com/ 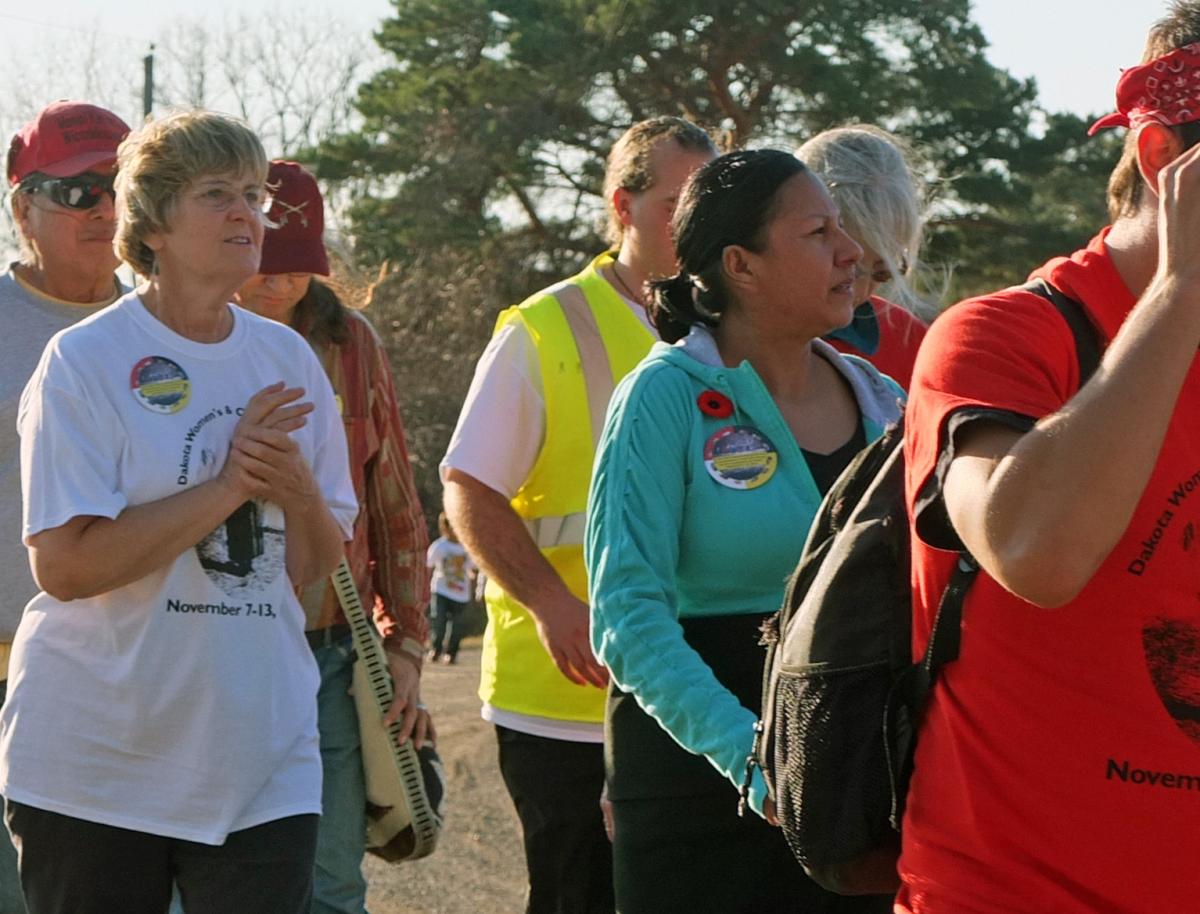 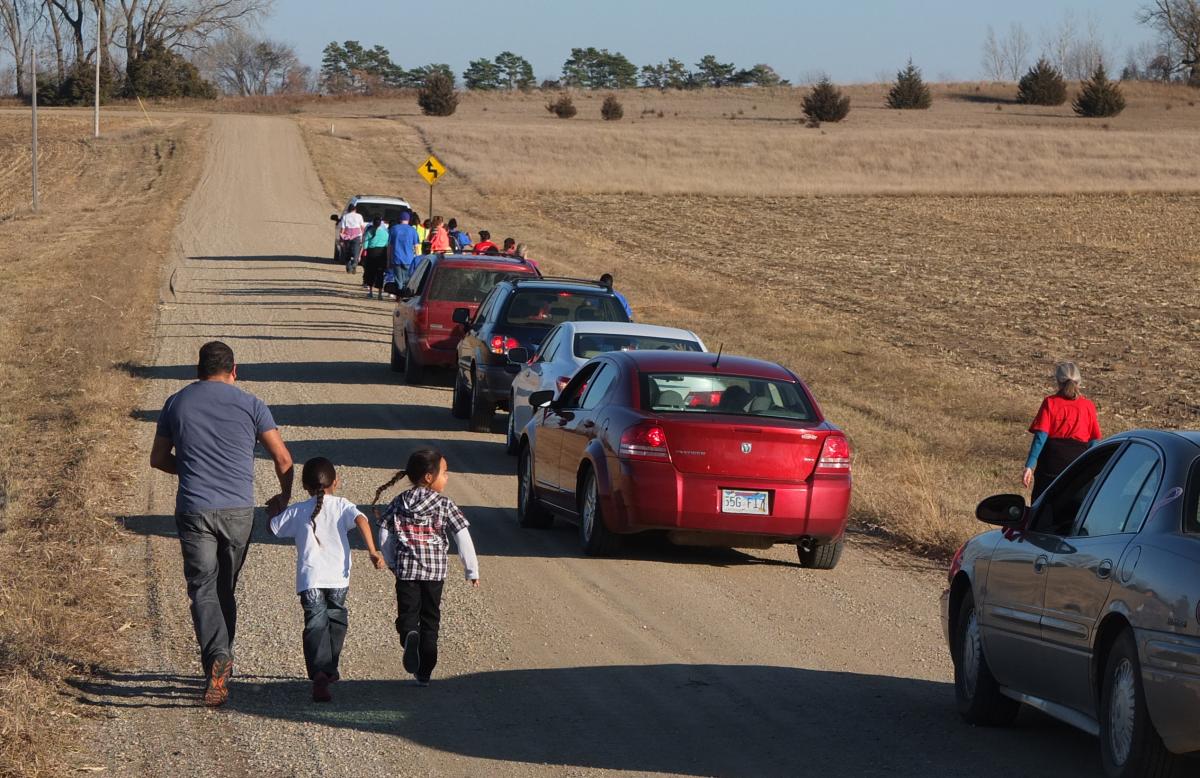 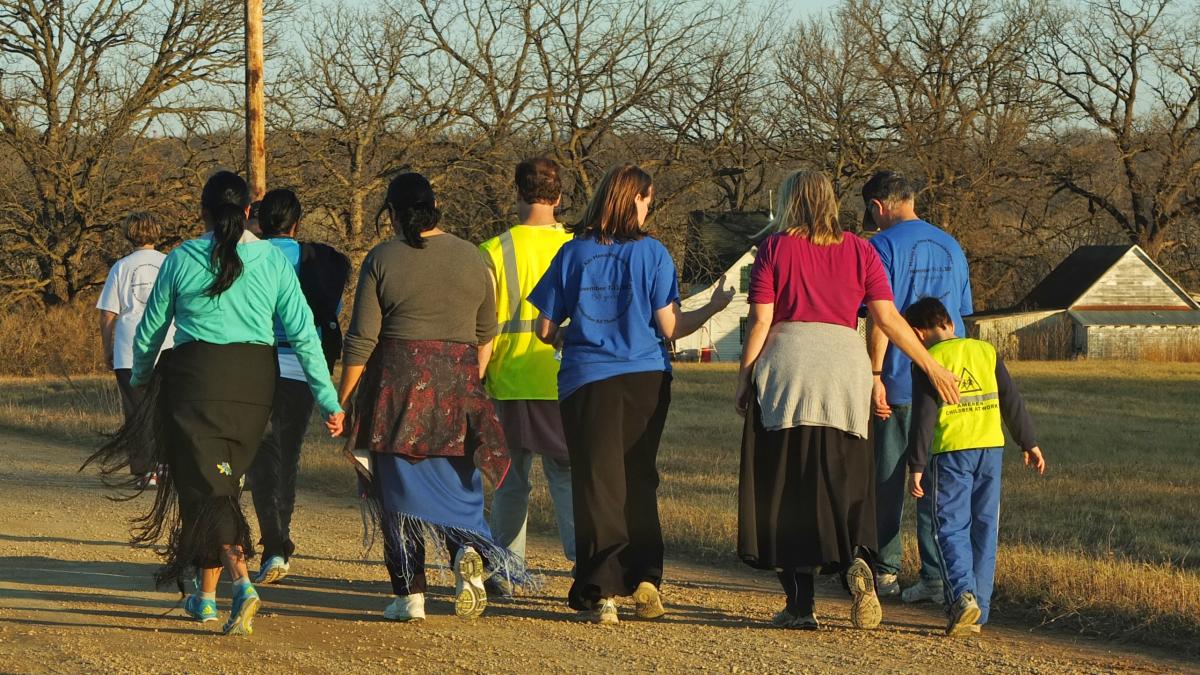 CORRECTION: The food was purchased from the St. Peter Food Coop with donations from the Gustavus Diversity Center, Building Bridges, and Office of the Provost.