U.S. Sen. Al Franken (D-Minn.) at his Drake Bank Building office in St. Paul Friday, presented a Bronze Star to Dai Vinh, a Richfield Vietnamese refugee of 25 years, who fought as a Captain in the Republic of Vietnam Armed Forces.

Dai Vinh said simply that he is honored and grateful to receive honor from the United States and Senator Franken.

“It has taken a bit of time but better late than never,” said Vinh. “I am a very proud Vietnamese American and have had the great fortune to have lived here in America since 1975.”

Senator Franken noted that officers from the other federal uniformed services are eligible to receive the award if they are militarized or detailed to serve with a service branch of the armed forces. Captain Vinh said he was charged with the task of protecting four U.S. military advisors, the term given to U.S. advisors attached to his RVA unit.

In this instance Tran was credited with taking action that resulted in likely saving the lives of the three American officers and with motivating his men to repel a superior number of the enemy.

Franken read the certificate which Tran recalled the day on November 14, 1968, when Cpt. Dai Vinh led a patrol and his platoon encountered a large number of communist soldiers. They were pinned down and the enemy was advancing. He was told to wait for reinforcements but he felt it would be too late until they arrived.

Tran took it upon himself to move forward and effectively neutralized an enemy advance long enough to motivate his soldiers to follow and a half-hour battle ensued – and ending with the enemy withdrawal. He noted that when the battle was over the U.S. advisors said to him that the actions likely saved their lives, and learned later that he was recommended for the Bronze Star.

As far as he knew, Tran said the award was approved but the War went on and by 1975 no one was thinking about awards and ceremonies. When Saigon fell in April, Tran was more concerned about getting his family out of the country as he would likely be jailed or executed and they would also suffer as the family of an RVA officer.

According to his son’s, Phuc and Mike, the family first made their way to the Philippines and Guam, and then to Arkansas before being sponsored by the Lutheran Church to Minnesota. They lived in Apple Valley for a time and then settled in Richfield where Dai Vinh continues to run a small business.

“We are very proud of him,” said Mike, adding that they knew their father was an exceptional soldier from the stories they heard from an uncle. However, Dai Vinh never talked much about his 12 years of military service in the 34 years that have passed since the war. 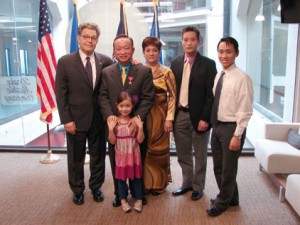 Today, both of his sons are college educated and successful in corporate America. After raising his family Vinh never forgot about the medal, however, and approached Sen. Franken’s office to see if they could do something.

Franken said the process went fairly quickly. They submitted the request to the Department of Defense in January and had word soon after that it went through and by March they award and paperwork were on their way.

Vinh entered the military in Vietnam at 18 and war was all he knew until he left for America in 1975.

“This medal represents among many things my youth,” he added. “At a time I should have been dating or entering college, I was beginning the twelve years I would be fighting for the freedom and democracy of Vietnam.”

He took the moment to recall and thank all of the ROV soldiers he encountered in his time in service and to the American military forces as allies during that time offering help and some of them their lives.

“I know if I were asked to do it all over again, I would have to say yes,” he said. “This may seem odd to a lot of people but I am a man of honor and responsibility and the freedom of my home country was in peril.”

Tran further explained by adding that the past 35 years in America has shown to him that this is a great and free democracy. That practice is not always perfect means much arguing but that is the freedom he fought for in Vietnam.

“We now have communication devices that can spur revolutions,” he added. We now send billions of dollars back to the communist regime in Vietnam and not stop to think of the economic power we possess to fight for freedom and democracy. I know I am truly an American because I am daily reminded of the responsibility that comes with freedom and my message to the American youth and the Vietnamese youth is that freedom is not free. I know this because of my life experiences and I know this because of this medal.”