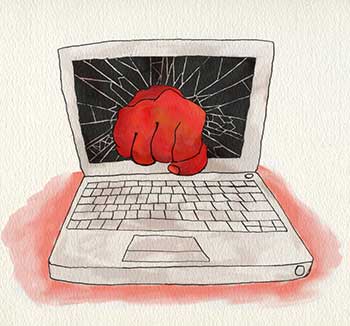 Illustration by Ruby Thompson, a junior at Avalon School in St. Paul.

Alfred Olson, 16, was visiting an online forum, “Forum Springs,” when an anonymous person told him: “Screw you, you suck.”

This kind of insult is behavior many teens encounter online, but something that is becoming more of a concern online is cyberbullying.

Cyberbullying is the use of social media devices and websites to bully and abuse other people. Or, says Olson, of Roseville, Minn., cyberbullying is just a way to say stuff about people online that you don’t want to say to their face. It’s bullying from behind a computer screen.

“Bullying has existed for years with all ages and it always will. It is a way of demonstrating power,” said Shayla Thiel-Stern, a professor of mass communications at the University of Minnesota.

She has been studying youth and the media for nine years and is considered an expert in this field.

“Teens spend more and more time on social media as a way of social networking because their chill time is taken up by school and activities, so naturally this results in more accounts of cyberbullying,” Thiel-Stern said.

Is it worse then your conventional brick-and-mortar schoolhouse bullying? “I think it’s just as bad. The pain is still there. People still get hurt from it,” Olson said.

Shayla said cyberbullying often happens along with schoolyard bullying. The only difference is that it is harder to fight back online. Once it’s out there, it’s difficult, if not impossible, to get what the bully wrote to disappear.

Danny Botethi, a sophomore at Hudson High School in eastern Wisconsin, said: “You will find a lot more people bullying online than at school just because it takes a lot more courage to say it face to face. It’s a lot easier to just send a message without having to see the look (on) their face when they read it.”

“Kids who normally wouldn’t bully do online because it is easier not to do it in person,” Thiel-Stern said.

Private info shared with others most common bully tactic

According to the Pew Internet & American Life Project, approximately 30 percent of teens have in some way experienced “a range of annoying and potentially menacing online activities.”

The most common form of cyberbullying, according to a Pew survey, is someone posting a private email, instant message or text where other people can see it.

Even though there has been a lot of media attention paid to this subject recently, cyberbullying has been happening for the past 5-10 years, Thiel-Stern said.

It tends to affect teens from the ages of 11-15 the most, but the age range seems to be getting lower, she said.

“The most common methods of cyberbullying are whatever is most popular at the time. Whether it be texting, instant messaging, online forums, Facebook, MySpace, you name it, that’s where you will find the most action,” she said.

Olson said he has seen a lot of cyberbullying on a new, popular forum called Forum Springs. Forum Springs is a public forum where just about every topic is discussed. You can create anonymous profiles and send private messages to friends or contacts.

This is where Olson was harassed. “You can say whatever you want, completely anonymously with one easy click of a button. No one would ever know who said it,” Olson said. “Lucky for me, I don’t take it personally. If someone thinks negatively about me, so be it. I could care less.”

Not all victims of cyberbullying can just brush it off. “For the people who do take it really hard, it’s awful. I know kids who have gone to therapy for it,” Olson said. “There’s nothing you can do about the severity of it.”

If a teen is being cyberbullied or is witnessing it, Thiel-Stern suggests the following: “Tell a parent or teacher who can step in and help you, or you might report it directly to Facebook. They have a link where you can report cyberbullying, and if it is an especially bad offense, the person committing the bullying could have their account revoked permanently.”

Thiel-Stern also said turning to your friends for help confronting the bully can sometimes work, but make sure not to become a bully yourself. Confront, don’t retaliate.

“You can encourage civil behavior among other friends by setting a good example, telling the bully simply to stop it, and then ignoring that person,” she said. “Sometimes this works, and sometimes it doesn’t. Regardless, do not be afraid to tell someone when this is happening because it is nothing to be ashamed of, and often, a friend, parent or teacher can help you.”

Teasing vs. bullying, know the difference

One of the biggest difficulties with cyberbullying is being able to tell when someone is actually being cyberbullied or if the person saying or doing negative things is just messing around.

Bullying is different than teasing. Bullying is one-sided and cruel. “Look to see if it is incredibly malicious, or think if it would really hurt someone. Most people have a sense of morality and can tell when something is wrong,” Thiel-Stern said.

Not much is being done to prevent cyberbullying, she said. “Educating the public about the Internet and social media is the first place to start.”

Schools are in a tough position because much of the bullying takes place off school grounds. Nonetheless, the Minneapolis Public School district’s policy is to respond to any bullying whether or not it occurs on school property.

Parents need to be educated about social networking and talk to their kids about cyberbullying, Thiel-Stern said. One impulse parents might have is to take away their kid’s access to the Internet and social media. Even if done to protect them, that decision would deprive the teen of a big part of their social life and is a bad idea. Doing that could actually motivate a teen not to tell his or her parents about being bullied, Thiel-Stern said.