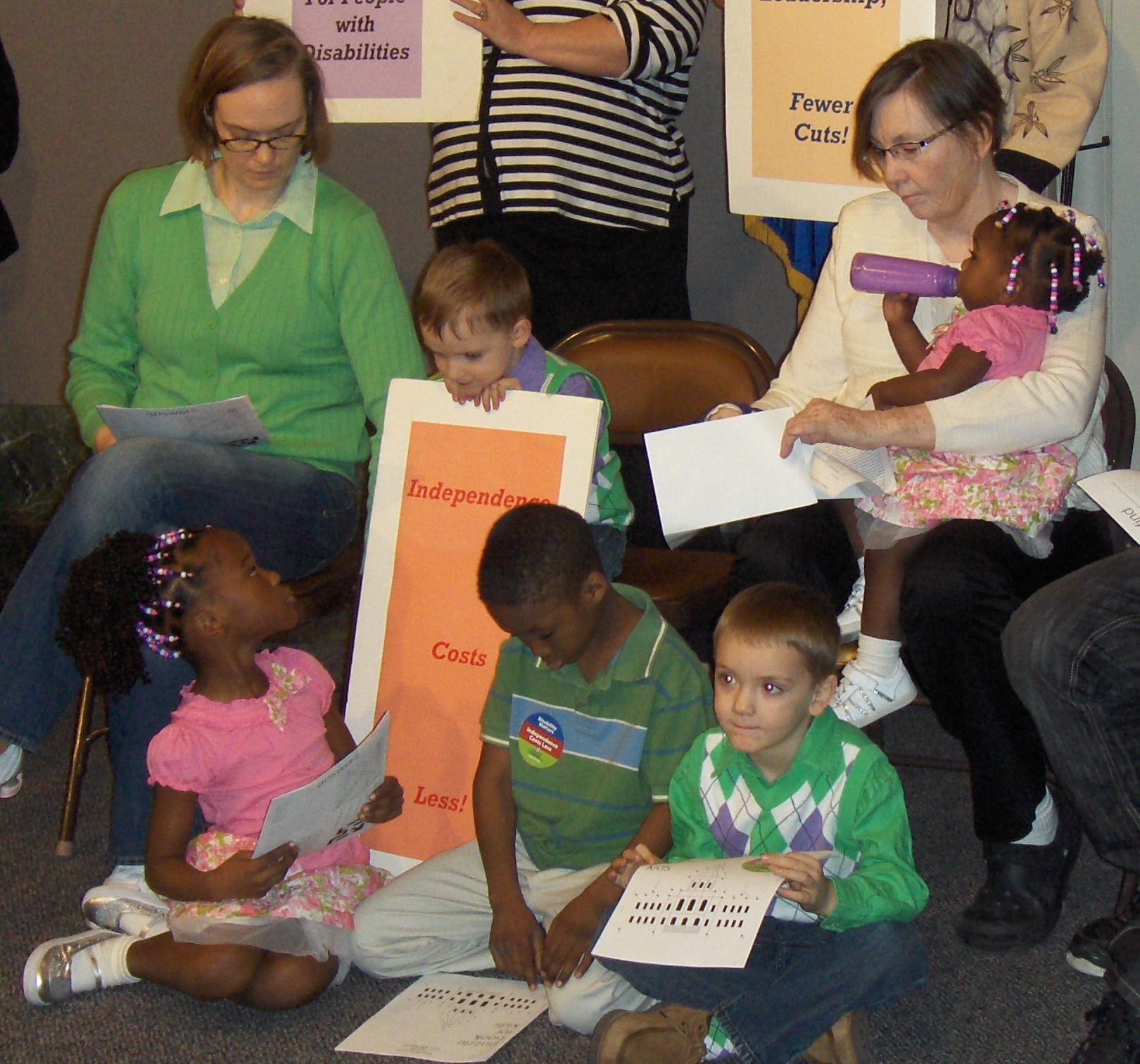 Betsy Davies (right), her adult daughter Erin (left) with Betsy's adopted and foster kids at last year's rally at the capitol on PCA cuts. Photo provided by The Arc of MN.

Betsy Davies is tired to the bone. The Richfield mom adopted four special needs children and is in the process of adopting two others. Now her two oldest sons’ Personal Care Assistance hours have been cut in half.  The Personal Care Assistance, or PCA, program provides in-home care so that people with disabilities can live independently.

For Davies, whose two oldest sons need constant supervision, the PCA hours have been a lifeline. Her oldest has multiple disorders and learning disabilities, and may never live unsupervised.  A younger son was severely abused as a child before coming to Davies. He has severe behavioral disorders, is bi-polar, has fetal alcohol effect, and is prone to explosive fits.

Davies said they struggled with the original PCA support they had, and with their hours now cut in half, that she can’t help but feel abandoned.

“During the adoption process, we were assured by the county and the state that we would have services to help us meet the individual needs of our children,” she explained. “PCA hours are a tremendous help when you are working with special needs children.”

This July, the Davies family may be facing more cuts in their PCA hours.  Her family is one of thousands across Minnesota who are in a state of panic over what will happen to their children or loved ones.

“Cutting PCA services without a reliable and reasonable replacement for those services for people puts them at risk – these are vulnerable people in our communities,” said Karen Conrath, board director with The Arc of Minnesota, and a retired 35-year veteran of social services.

In the face of last year’s budget cuts, the Minnesota Department of Human Services developed a new assessment, creating more stringent guidelines for people to qualify for PCA services.

The first thing the new assessment did is change the definition of “dependency” to cover only those who need “hands on assistance” or “constant supervision and cuing” and it excluded those who need prompting and cuing due to cognitive limitations, brain injuries, dementia, mental illnesses, and behavioral issues.

The assessment also trimmed the amount of time allocated for each activity of daily living, or ADL, to just 30 minutes.  ADLs include grooming, dressing, bathing, transferring, mobility, positioning, eating and toileting.

When these changes took effect a year ago, by conservative estimates, over 4,800 people saw their PCA hours reduced or eliminated.

This coming July, Level 1 behaviors will be eliminated as a eligibility criteria and nearly 2,200 people will lose services – the vast majority being children. Level I behavior is when someone is physically aggressive towards themselves, others, or destructive to property and requires an immediate response from someone else to stop it.

“What that new assessment did was really strip away individual consideration of a person’s needs, and really collapsed things toward the average. Which is fine if you’re average, but it’s horrible if you are someone with really high needs.” said Anne Henry, an attorney with the Disability Law Center.

Ironically, the legislative auditor’s report that served as a catalyst for the change (see sidebar) had also warned “assessment guidelines should not be too rigid, given the need to take into account individual circumstances.”

“It’s just so unfortunate at a time our resources are shrinking to have taken the least expensive, most flexible program we have, and cut out a lot of people who really need that help. It’s not like they are going to just disappear, and so we’re going to have consequences for these decisions unless we do something to fix it,” said Henry.

The stringent guidelines under the new assessment have many advocates fearing that the cuts in hours will lead to more costly health consequences.

“PCA services are one of the most cost effective services that we have in the state of Minnesota, and if we let those go, we’re opening ourselves up to more expensive service options,” said Conrath.

The Courage Center is already seeing this with the community they serve. The organization surveyed 109 individuals who have already seen cuts in PCA hours of service this year for themselves or family members. Nearly a quarter of the people surveyed reported increases in medical services, including hospitalizations, wound care, increased therapy and medications.

When care is not managed, people with disabilities, particularly those that have experienced a catastrophic life changing event like a brain or spinal cord injury, are much more vulnerable to secondary conditions, explained Nancy Flinn, director of outcomes and research at Courage Center.

The secondary conditions include diabetes, hypertension, infections, wounds, asthma. Things can rapidly spiral out of control, leading to hospitalization.

“It doesn’t take a lot of hospital stays, or clinic visits or changes in medication to add up to a lot of money, and so that cost shifting is something that’s not really being talked about or dealt with,” said Flinn.

Flinn described the delicate balance of care for people with disabilities as a thin margin of health.

“If you and I have something happen – we get the flu, we fall – we don’t have a lot of secondary consequences. We recover and move on.  One of the problems with the cuts in PCA, is that it appears to have cut through that thin margin, and we’re starting to see health consequences.”

Flinn said she doesn’t have a problem with the state re-evaluating the PCA program and being stringent with guidelines, and said that’s good public policy.

“But when I see people who cannot transfer themselves in and out of their chairs, having their hours cut so that they have to be up in their chairs longer, putting them at risk for pressure wounds, or having to go to bed at 7 o’clock because there won’t be anyone there later to put them to bed, that doesn’t seem to make sense either,” she added.

One expensive consequence of leaving a person in their chair too long is the risk of pressure wounds, said Flinn.

“If they get a pressure wound and they can’t get it healed, the problem is if it goes on and ends up resulting in a graft, that would cost up to $100,000 to resolve, and they may end up in a nursing home for a period of time while it’s healing,” she explained.

In contrast, the year before cuts were made, the average annual cost of PCA services was just under $28,000.

The National Alliance of Mental Illness, Minnesota (NAMI-MN) also did a survey of individuals and families who access PCA in Ramsey County, and how the cuts have impacted them.

“A lot of family members said they would have to reduce their work hours in order to care for that child or adult. Nearly half said they would most likely end up in residential or foster care. Others said they’d end up in a nursing home,” said Sue Abderholden, executive director of NAMI-MN.

Another question the NAMI-MN survey asked was why families used PCA services rather than another alternative.

Flinn said about 31 percent of the people surveyed by Courage Center who lost hours, moved to be closer to family support.  One mother surveyed was forced to quit her job to care for her daughter.

“It’s hard to look at that when the economy is so tough – to have a family member have to quit their job in order to come home to take care of a child. It’s just really hard to listen to some of those stories. It really is tragic,” said Flinn.

John Tschida, the vice president of public affairs and research at Courage Center, has a severe spinal cord injury, and says he understands the need for assistance with the very basic things that most people take for granted.

“I’m also a user of these services. I pay for them out of pocket, but without them, I couldn’t get to work in the morning, I couldn’t do the job that I do,” he said.

He said if the PCA services weren’t available him, his wife could theoretically fill the gap.

“But I can tell you that would be a recipe for divorce.  In some cases we are seeing marriages fall apart as a result of this law.  Because spouses need to be nurses in addition to loving spouses, and that fundamentally changes the relationship,” he added.

One of the main rationales for the cuts, according to state officials, is that there are alternative services available, but no one seems to know where these programs are. So for individuals that simply cannot live independently on the reduced PCA hours, families and advocates fear the only alternative is a nursing or residential facility.

She would like the state to look at the Community First Choice Option program, a federal program that will soon be available through the Affordable Care Act.

“At its heart, it’s a modernized version of PCA services. It updates the program, which hasn’t really been updated for 20 years, and it makes the service more useful to the variety of people that we understand today have a functional need for support in the home,” Henry said.

The program will be available next October, and the federal government has not yet released guidelines or rules.

Abderholden said there was a state program for children with mental illness or behavioral disorders called the Children’s Therapuetic Services and Supports, which has behavioral healthcare aids – similar to a personal care assistant, but with more training.

“But the problem is the payment rate was so low, providers couldn’t hire anyone,” she explained.

Another option for people who have severe disabilities is the Community Alternative for Disabled Individuals waiver, or CADI.  But the county waiting lists for these services are long.

Most aren’t holding their breath for a miracle from the state. Once the changes were put in motion by law, they are extremely difficult to reverse, says Rep. Larry Hosch of St. Joseph – particularly if it means increasing the deficit.

“If we do so, it would mean making another difficult cut somewhere else that also impacts people.  I’m going to be advocating for either a robust alternative to be implemented, or for us to allow the Level 1 behavior to still qualify, but it’s going to be very, very difficult,” he said.