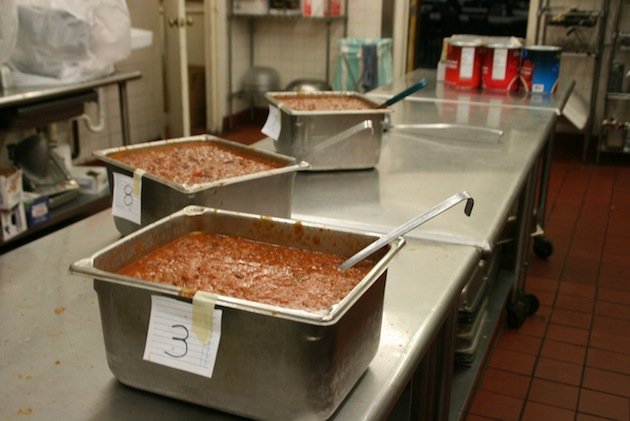 As chili contests go, the 9th Annual VFW Chili Cook-Off at the American Legion Post 435 in Richfield was small potatoes. It wasn’t even an official International Chili Society sanctioned event. Only nine teams of chili cooks signed up to compete, down from previous years. Nonetheless, everyone attending – the organizers, the judges, the chili fans and especially the competitors – took this contest seriously. Which meant it ended up being a lot of fun.

“They are a competitive lot, I’ll say that,” said Robbie Ekhoff, the event’s chief organizer.

The rules for the cook-off are strict. The contestants must cook at least two gallons of red chili (no fancy chicken chili or chili verde allowed.) All recipes must include at least small amounts of five ingredients provided by the VFW – hamburger, kidney beans, chili beans, tomato sauce and tomatoes. After that, it’s chef’s choice for onions, garlic, spices, additional beans, even extra meat and hot chili peppers.

“Each year, it’s been getting spicier,” Ekhoff said. “People’s tastes are changing. It’s not all Scandinavian, anymore.”

Contestants arrive as early at 8:30 am to start cooking on the club’s patio, rain, shine or snow. “The legion provides no electricity,” Ekhoff says. “All the prep is done here and the cooks have to bring their own heat sources. It’s propane, gas or charcoal. No crock-pots.”

When the cooking is done, staff members take the pots of chili to the kitchen where each pot is assigned a number instead of a name, a safeguard to keep the contestants from lobbying their friends and influencing the vote, then transferred to serving trays.

Only staff members and reporters are allowed in the kitchen once the contest starts. Ekhoff chased off one contestant who tried to enter, trying to sneak a peek. “Some people take this like life and death,” she says. “Voters have to be 21 years old. We had to make that rule because we had people’s six-month-old children voting.”

The tasting began at a little after 1:00 pm, during the half-time of a Vikings game. Most attending were dressed in purple and gold except for one table of Packers fans. One of the TV screens played the Packers game and the rest were turned to the Vikings, who were playing a team whose uniforms were teal and white. Minnesota was losing, badly. It didn’t matter. Attention was focused on the chili.

At the back of the restaurant, three judges carefully tasted samples of the nine chilis from small plastic cups, writing their impressions on official tasting forms. “We’re looking for balance of spices and consistent texture,” said Craig Deneen, a software engineer and former post commander. He writes down ‘too salty’ for #6 and ‘cumin with hot spice’ for #4.

“I’ve found over the years that you can eliminate two-thirds of the chilis right away,” he said. “But over the years, they’ve gotten better and better. It’s getting harder to judge a winner.”

“You want flavor and aroma but it shouldn’t be overwhelmingly spicy,” said chili judge and retired Minneapolis police officer Lynn Meuwissen. “You don’t want it to kill your taste buds.”

The judges awarded grand prize to Ron Rogers and Bob Newcomb who say they’ve been re-engineering their recipe for the last three years, trying to create this year’s winning recipe.

“We use lots of garlic and we don’t like using anything canned, except the tomatoes,” said Newcomb. The two agree that the contest is mostly about the spirit of friendship, “It’s lot of good people cooking outside,” he says. “Plus, chili goes with beer. Anything’s good if it goes with beer.” The second prize Judges’ Award went to Scott Bauer.

Two sisters representing two different teams walked away with the other top honors. The team of Nina Wortman and Jeff Husaley won the People’s Choice award. Nina’s sister Missy Husaley (wife of opposing team member Jeff Husaley – it’s complicated) went home with the Cook’s Choice first place trophy. “At home we like heat in our chili, but here, if we want to win, we have to make something everyone will enjoy,” said Missy.

I had my favorites, too. The chili labeled #8 was sweet and spicy, #5 had a satisfying back-or-the-mouth burn, #2 had a smoky taste and lots of tomato and #4 was meaty and rich. I didn’t vote. It would have been a conflict of interest. But, my vote probably would have gone to #2. Maybe I’ll enter next year. I’ve been growing ghost peppers. They might be good in chili.

Only staff and reporters are allowed into the kitchen to see whose chili gets which number.

A pot of winning chili

Some chilis were more popular than others