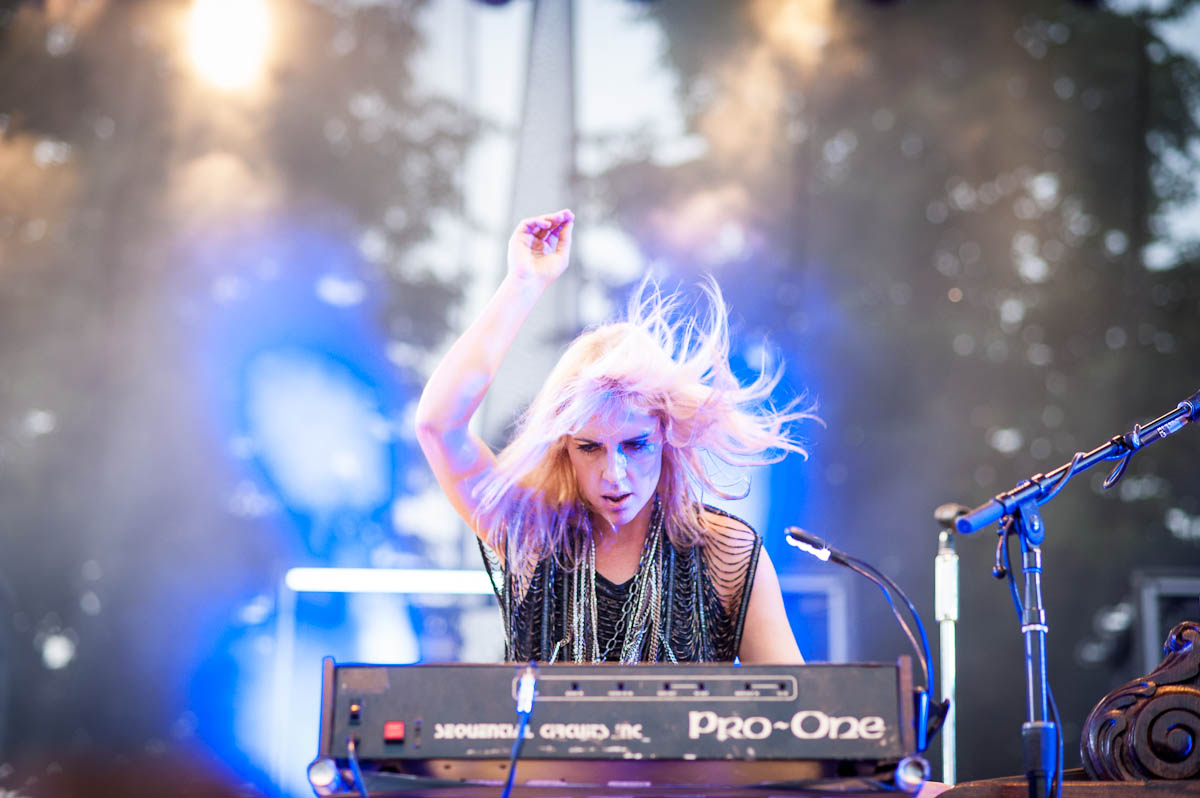 Well, I decided to finally get my butt over to Rock the Garden this year, after having spent the last several years reading the Twitter postings about it and being envious that I was missing out on the fun. In fact, I have only been to one Rock the Garden previously, when Sonic Youth and Stereolab played in 2000, which was such a great concert that perhaps the high bar was what prevented me from going again.

I unfortunately missed out on Dan Deacon, who played first, which was by all accounts a great set, having started outside, and then when it started to rain moved into the parking garage. Kudos to the backstage crew for making that happen.

I arrived right before Low started playing. The rain had pretty much stopped, although it was still pretty gray and gloomy out. As they were just starting to play, lead singer Alan Sparhawk said, “Trying to let the sunshine in,” a nice sentiment, although it seemed pretty wishful thinking at the time.

It turns out though, that confirming my belief that Low are intermediaries with the gods (or God, since you know, they’re Mormon) their music did indeed act as a harbinger of the sun. By the time their one-song set, which lasted about 30 minutes, was over, the rain jackets and long sleeve shirts worn by audience members were coming off as the sun shone down on everyone

The song, “Do You Know How to Waltz?” was an awfully quiet and meditative piece for such a large and energetic crowd, but my feeling was that it totally worked. The long stretches of drumming and complete lack of any lyrics perhaps was less accessible to the younger audience members than the other bands were, but what’s the point of an art museum sponsoring a music concert if at least one of the bands can’t try something a little different? In any case, I personally found their set magical, even if some of the twenty-somethings were complaining about it afterward.

At the end, Sparhawk proclaimed “Drone, not Drones,” which I mistakenly heard as “Drums, not Drones,” at first (same thing, really), which was a nice button, if slightly trite.

I quite enjoyed the rest of the concert, including the Bob Mould Band, who had everybody dancing, and Brian Aubert’s salty tenor voice from the Silversun Pickups. I was less excited about poppy Metric, but once again I think I may have had the minority opinion on that one.

In general, once the rain blew over, it was a lovely night to be out, listening to music with the beautiful sky. If there was a little bit more room to walk around in the food and drink area, I would have been happier, but you can’t have everything.