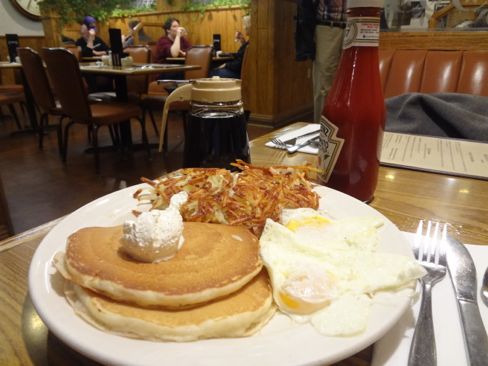 I drive by Curran’s Family Restaurant at 42nd and Nicollet frequently, but I can’t remember the last time I set foot inside the place. I’m much more likely to eat at one of the many immigrant family-owned ethnic restaurants a little further north on the Eat Street stretch of Nicollet. But what finally lured me in was the big banner outside the restaurant advertising their Early Riser breakfast special: two eggs, potatoes and toast or a pancake for $1.99, available from 6 to 8:30 a.m. daily.

So I stopped in recently and gave it a try. It was everything it was supposed to be: the eggs were done over easy, as ordered, the hash browns were crispy, the pancake light and fluffy, and catsup available on request. Perfect.

Emboldened by this initial success, I returned recently at lunchtime to try one of the daily specials: beef stroganoff with egg noodles and breadstick for $8.45. This once-elegant dish has slid a long ways down the food chain, and Curran’s version was a less satisfactory experience: no mushrooms, no seasonings, just chunks of well-done beef in a sour cream gravy.

But I would gladly return to try one of their other entrees, such as the hot beef sandwich with mashed potatoes and gravy ($7.94), or the meatloaf dinner with potato, vegetable, bread stick and choice of salad or coleslaw ($10.94.)

I’m also game to try the pie special, served from 2 to 5 p.m. daily, and 7 p.m. to close: a slice of pie for just $1 (regularly $2.20). The pies aren’t homemade—they’re from Chef Pierre—but both the strawberry and pecan pies on display in the dessert case looked delicious.

It turns out, by the way, that there is an immigrant family story behind Curran’s, too—only the Currans arrived in the U.S. from Ireland in 1861, came to Minnesota in 1870, and opened their Nicollet Ave. restaurant in 1948 as a car-hop drive-in.