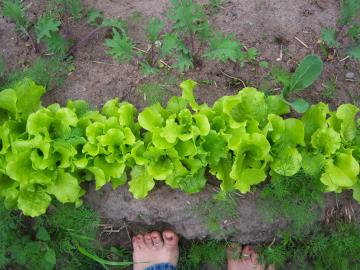 Thirty-three CSA (Community Supported Agriculture) farms from Minnesota, Wisconsin and Iowa convened at the Seward Coop in Minneapolis April 24 in search of new members and customers. CSAs generally offer an arrangement of advance payment or volunteering in exchange for a weekly bag of groceries produced and distributed by a farm. Members of a CSA buy a share that can cost anywhere from a hundred dollars to a thousand for the duration of the season. How long the season lasts depends on what is being produced. When someone joins a CSA, they reap the rewards of an unusually good season as well as the loss if unforeseen circumstances such as a drought or flood affect a crop. This marks the ninth year the co-op hosted the CSA Fair in its parking lot.

Nearly all of the CSA participants emphasized sustainable and organic agriculture. Their size ranged from half acre lots in the inner city to large multi-purpose farms in rural areas. According to Nett Hart, a farmer at Webster Farm Organic near Foreston, MN, the number of CSAs is growing, “There are probably four times as many farms as there were five years ago.”

It’s not just more people catching on to the idea of CSAs, but that they are diversifying in what is produced. While garden produce the most common item, there were also CSAs that focused on meat, dairy and even one farmer that makes soap from goats’ milk.

Kristine Jepsen from Grass Run Farm in northeast Iowa distributes free range pork and beef to several food co-ops throughout the area in addition to meat for CSA members. Meat CSAs tend to be more expensive and require the same community support to thrive. “Meat is extremely capital intensive, it takes several years to produce, and processing itself is a significant cost,” said Jepsen. “The element of investment is the same. There is still a need for smaller producers/distributors to have the same level of public support that a vegetable CSA program would have.”

Farming is not limited to rural areas. Some CSAs are operating in inner city neighborhoods, such as Philips and Seward in Minneapolis. Farmer Stefan Meyer has partnered up with Seward Redesign, a non-profit, community development corporation who want to see their four acres of land used not only as a CSA, but to eventually create housing with rooftop agriculture. With less than an acre of land in two separate plots in the Seward neighborhood, Meyer says that using the land efficiently is the key.

“The method that I’m using is called the Bio Intensive Growing Method,” said Meyer. “It basically allows me to grow a lot of food in very small areas. It’s a very hands-on approach to farming. So it differs from rural farming where it’s larger scale, more mechanized, they have to spread out a little bit more. This will be much more intimate.”

In bio-intensive farming, plants that accommodate each other through differing root system sizes can grow closer together. This, mixed with crop rotation, creates a greater amount and diversity of produce.

Nearly all of the 33 CSAs at the fair have websites. The Seward Co-op website has a link to all of these, as well as contact info and descriptions of the participating farms.