Pharoah at the Fair. (All crop art photos by Mary Turck)

The Crop Art exhibit is a hidden gem at the Minnesota State Fair, located on the rear wall in a room of seeds and scarecrows in the Agriculture-Horticulture Building. Crop artists of varying levels of expertise enter the annual exhibition.

Crop art was introduced at the fair back in 1965. Participants are classified as amateur or advanced. To become advanced, an amateur must win eight blue ribbons. The art is divided into lots, including ‘special occasion,’ ‘junior,’ ‘senior citizen,’ ‘out of state,’ ‘wearable,’ ‘natural colors,’ and ‘dyed or painted.’ All seeds used must derive from Minnesota plants. 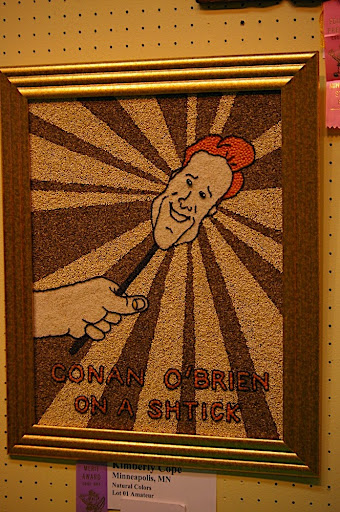 Many nods to pop culture emerge in other works. James Buhler pays a loving tribute to Farrah Fawcett, using a famous 1976 poster of the actress in a red bathing suit as his model. Kimberly Cope’s work is a parody of Conan O’Brien, where the comedian becomes a fair-friendly treat as ‘Conan on a Schtick.’ Nut Goodie and Barbie are also recognized, as both celebrate anniversaries this year. 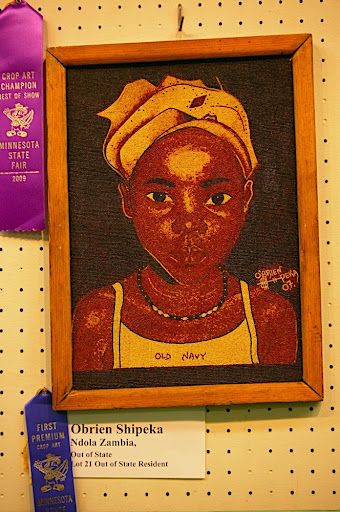 Conventional crop art themes are not ignored. Out-of-state artist Obrien Shipeka, perhaps coming the farthest to exhibit in the out-of-state category, won a “Best of Show” with his portrait of a child. Janet Krueger’s intricate, three-paneled landscape was also among those awarded “Best in Show.”

The exhibit wouldn’t be complete without giving recognition to the master of crop art, Lillian Colton.  The exhibit has an introduction detailing Colton’s history, and includes a wall of her works. Linda Paulsen, Colton’s daughter, was on site this year to demonstrate the craft to visitors. Paulsen’s work is featured on the wall adjacent to Colton’s. She explained her mother’s participation in crop art.

“She [Colton] started the second year it was here. She would make entries in every category, which were eight different categories. And then she got grand champion nine years in a row, and thought, ‘this isn’t fair,’ so she stepped down and took over demonstrating crop art.”

Colleen Sheehy is one of the exhibit’s curators, and also wrote Seed Queen: Crop Arts and the Amazing Lillian Colton. She explains what makes Colton a master of the form.

“Lillian was the great innovator in crop art,” said Sheehy. “She pioneered the use of seeds to do portraiture. She mainly did portraits of famous people who everyone would recognize. She was a visual and a textile artist, as well as a hairdresser, and she brought those skills to be able to do realistic looking portraits.”

Sheehy went on to explain Colton’s influence on crop art. “Because of her treating the medium as an art form, she inspired a lot of innovation in crop art and made it more than just a homey craft,” said Sheehy. That is why today you see such virtuoso work and also social and political satire in crop art. I usually think the crop art competition is more interesting than the fine art show at the fair.”

Crystal Erickson (toffee_rox@hotmail.com) is a freelance writer and photographer, with preoccupations in hip-hop, art, and bicycle anarchy.