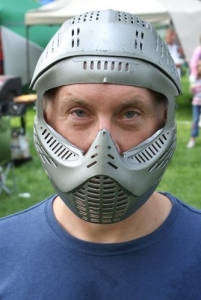 A great many successful theater artists living and working in the Twin Cities have been asked why they stay in Minnesota rather than heading to one of the coasts, or at the very least the glamorous theater world of Chicago. How an individual responds to this generally condescending question really depends on who’s asking as well as who is being asked. But I think an answer can be found in the career and life of actor/director/writer and general theater artist-of-note Craig Johnson.

If you’ve worked in the world of Twin Cities theater in the last 20 or so years you probably know or know of Craig Johnson. If you know Craig Johnson you’ve probably felt compelled at some point to tell someone who doesn’t know him that they should. He’s the kind of theater artist who if his name comes up in a conversation otherwise completely unrelated to Craig at least one person in the conversation will feel the need to say something like, “Oh, I love Craig, he’s wonderful.”

It’s as a result of the above stated context that prior to meeting or getting to know Craig I had no expectations other than to dislike him. I assumed that if Craig was as charming and wonderful as numerous people said it was likely in some part compensating for his lacking as a performer. Or if he was a skilled performer, people disregarded moments of unkindness because the quality of his work was good enough to let moments of coarse behavior slide. The truth turns out to be much more nefarious. Craig is actually a kind and thoughtful person who also happens to be a talented and hard-working theater artist. What the hell is a cynic supposed to do with a person like that?

At the 2011 Ivey Awards in September, Craig Johnson was honored for his outstanding direction of Girl Friday Productions’ Street Scene. I’m not aware of any applause measurements being taken during the awards ceremony, but it is very possible that a larger cheer was heard upon the announcement of Craig Johnson’s name than any other that evening. Craig has been directing since he was encouraged to direct a production of The Glass Menagerie by his High School theater teacher, Dale Fretland. However, Craig still thinks of himself more as an actor than a director: “I’d like the actor part to be more present but the director thing is what people are starting to know me for… I’m not complaining.”

That’s something you’ll notice about Craig if you spend some time with him and pay attention, he’s not complaining.

Craig worked heavily with both the Theatre in the Round Players and Park Square Theatre from the late 1970s into the late 1990s. He counts himself lucky to have been a part of Park Square’s transformation from very small theater company with big aspirations to a well-respected professional theater company that regularly works with some of the finest theater artists in the Twin Cities. At the same time Craig says what he values about TRP is that it has consistently remained a premiere community theater providing a place for non-professionals to take part in high quality work, a way for new theater artists to showcase their talents, and a place for former theater artists to return to the performing community.

The differences and commonalities between Park Square and TRP nicely capture the balance Craig seeks as a theater artist as well as nicely capturing why an artist would want to build and maintain a theater career in the Twin Cities.

Craig’s other career, the work he does outside of the theater community, also reveals a lot about what matters to Craig and what matters to Minnesotans. By day Craig is the manager of the James J Hill House, the historic St Paul mansion that was once the home of the Hill family. The Hill House is part of the Minnesota Historical Society, a non-profit educational and cultural institution established in 1849 that consists of 26 historic sites and museum across Minnesota. Craig has been employed by the Minnesota Historical Society in varying degrees for the last 34 years, working at several different historic sites, large and small, in several different departments, large and small.

Having a full time day job provides a level of security and support so that Craig can focus entirely on the work he really wants to do as an artist. But it also gives Craig opportunities to, as he puts it, “interact with many different people and opens me up more to the world at large.” Living in and being a working theater artist in the Twin Cities makes sense in that he can easily be engaged in his community and have a full life in and out of theater. An artist can have a great deal of success and still lead a normal and grounded life.

But Craig’s work with the Historical Society hasn’t truly been separate from his work as a theater artist as he’s written, performed, or directed a vast amount of museum theater programs for the Minnesota Historical Society. In this way, Craig has found a way to blend the various components of this life that represents the things he wants and values without having to have strong divisions between job and art and social life. To Craig it feels like “all the theaters are more a part of the community” in Minnesota. He finds that the performing arts are more “integrated into the rest of the fabric of society” than they are perhaps in other places.

There isn’t much about the Twin Cities performing arts community, or the Twin Cities in general, that’s glamorous or flashy and that seems to create an atmosphere with few distractions and a lot of opportunities for theater artists to do their work. On top of that there seems to be an informed citizenry that cares about having robust arts and culture programs. Or, as Craig describes it, if you look at how Minnesotans vote on cultural funding and what audiences support and they seem to say: “It’s good to have that stuff around.”