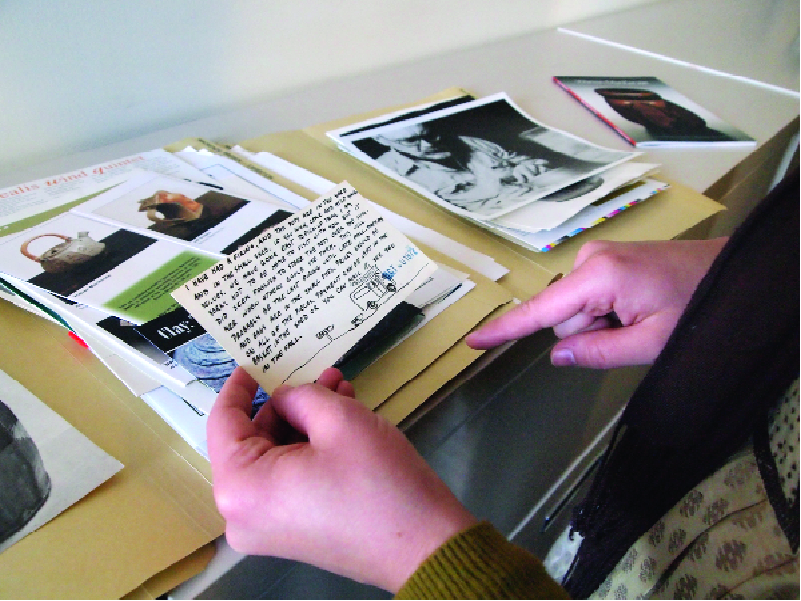 From the artist files: Potter Warren MacKenzie, who works outside of Stillwater, used to leave notes instructing people to help themselves to the pots they wanted, to leave payment in the basket in the shed, or mail it. "See you in the fall," as "we've gone east." He now sells through Northern Clay Center.

“For a Northeast artist, we offer current information on their field and what other artists are doing,” said American Craft Council (ACC) librarian Jessica Shaykett. The library’s distinction: It’s the largest collection in the United States focused on craft. It’s at 1224 Marshall St. NE, Suite 200.

While there is a section of books on arts business and marketing, Shaykett said, “We’re updating, and looking for new resources. There’s a lot written about business, and art business. Craft business is a narrower focus.”

“It’s a work in progress,” she said, they’ll be getting better lighting and tables, and putting together some programming to get people more familiar with the space and resources. In October 2010, she was just a few weeks into the job; now has organized everything, perused the artist files collection and can declare a favorite file, Warren MacKenzie.

Artist files, about 6,000 of them, include resume and biographical information, slides and photographs, exhibition flyers and catalogs, clippings and other ephemera, according to the library brochure. “In the early 1960s if they were featured in Craft Horizons [the ACC magazine] they started a file on them,” Shaykett said. “It was intimate correspondence from the Council to the artist.” New entries have fallen off some “due to digital, but we still keep files on our College of Fellows and Gold Medal Award winners.”

A transplant from Savannah, Georgia with Midwest roots, Shaykett said “the Twin Cities is such an amazing place with innumerable things to see and ways to get involved.” She found a warm reception and attracted knowledgeable volunteers, three of five themselves librarians. “I’m always looking for volunteers,” she said, for shelving, re-shelving, research, and arranging and organizing collections.

Aside from helping with research and writing for American Craft magazine and newsletters, the ACC librarian spends some of her time getting to know other craft organizations’ libraries and staff, such as Northern Clay Center and the Textile Center.

When ACC was in New York (moved in 2010 to Minneapolis after 67 years there) there was only a part-time librarian and not much time for outreach, Shaykett said. There were lots of arts libraries there. She and other members of ARLIS, the Art Libraries Society of North America, learn about each others’ collections. The overall goal: to efficiently help people find what they need. 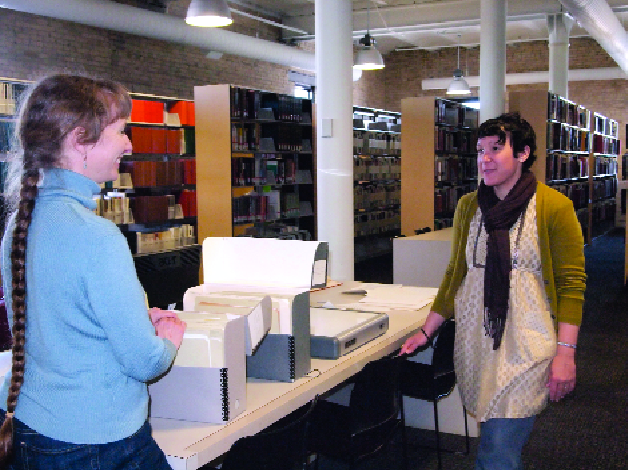 Volunteer Dulcey Heller, in blue at left, talks with librarian Jessica Shaykett at the American Crafts Council, a space with windows on the east and north-facing edges, Suite 200 of the former Grain Belt Brewery, 1224 Marshall St. NE. Heller has been looking at Aileen Osborn Webb’s typewritten speech scripts. Advocating for fine craft as early as 1929, Webb, the founder of American Craft Council, had written notes in the margin that if she could wear a hand crafted necklace, she should finger it to emphasize a point while speaking.

In addition to over 6,400 books, 7,000 exhibition catalogs, 700 bound volumes of periodicals and current magazines, ACC houses the archives (working papers, meeting minutes, etc.) of American Craft Council from 1941 to the present, the American Craft Museum (1956-1990) and the World Craft Council (1964-1980). ACC founder Aileen Osborn Webb, who died in 1979, also founded the World Craft Council. ACC and the library focus on “contemporary” craft, the era “heavily tied into craft becoming ‘fine,'” Shaykett said, starting in the 1940s.

“The ACC or museum history is what the researchers are most interested in,” she said. Perhaps a couple of people per week, such as museum curators, visit with various topics. The collection “fosters discovery,” they’ll get interested in something or someone and wonder if there’s more information.

While in-depth reference requests (more than half an hour of librarian time) incur fees ($15 for ACC members or $20 for non-members per half hour), most general inquiries can be handled without charge. Photocopying is 15 cents a page and scanning $2 per scan.

The library is supported by ACC, which has been successful at getting matching grants and many materials donations. A development goal is to get more information in digital form or at least indexed, digitally. “Online is good for in-classroom, professors like it. And young people are used to easy access,” Shaykett said. “It’s hard to put a book of photographs on line,” the depth of the image gets lost. Digital indexing helps, but “there’s still value of having [tangible] material.”