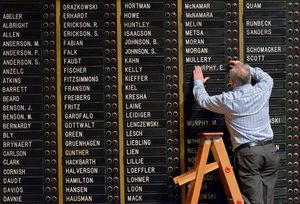 Over at the City Pages, the ever-excellent Andy Mannix asks in a cover feature: When will gay marriage be legal in Minnesota? It’s a good question. Bluestem is among those who believe that answer is “2013.”

The article reviews the past forty years or so of legal and legislative struggles toward equality, along with a couple of moments of backsliding on the local and state level:

In Minnesota, the debate over the legalization of same-sex marriage has been more than 42 years in the making.

The going has been slow and repetitive. This past election wasn’t even the first to include a campaign with the slogan “Vote No.” That also happened in 1992, when veteran St. Paul cop Bob Fletcher led a doomed push to repeal the gay-rights provision of St. Paul’s human rights ordinance.

But through these long and arduous years, one thing has remained constant: Minnesota is moving toward equality.

In a largely historical review by someone as accomplished as Mannix, it’s surprising that he glossed over the precedent for Fletcher’s doomed push: the sadly successful 1978 vote that repealed an earlier iteration of the St. Paul human rights ordinance that had banned discrimination in employment, education, housing and public accommodations on the basis of “affectional or sexual preference.”

Andy’s something of a whippersnapper, so it’s forgiven that he shared little about what may be the state’s first “Vote No” campaign for LGBTQ rights. It’s the sort of thing crabby old bloggers and news databases remembers.

In October’s The deep roots of the marriage debate, Sasha Aslanian examined the 1978 vote, citing the organizer of the repeal’s observation:

Angwin said the 1978 repeal was a life-changing battle for everyone who got involved in it.

As someone who was a whippersnapper attending Hamline University in 1978, the ordinance vote was one of those moments that clarified for me how important citizen engagement is–as well as how deeply hurtful it is to put another person’s rights up for a vote. Angwin was right.

I was a junior at the time, and it was one of those learning experiences that I’m glad young friends didn’t have to go through in 2012. Instead, they’ll know that their efforts helped reverse the tide of amendment amendments–and what smart and disciplined organizing with a human message can do to change hearts.

Even in Nexis, there’s not much mention of equality’s first flowering in St. Paul in 1974–and the crushing of that flower in 1978. The 1978 campaign to allow discrimination didn’t include Bob Fletcher as far as I can remember–he had graduated from Hamline a year before after a career as a star athlete and notoriously thuggish reputation as an RA in one of the student dorms–but it drew the anti-gay stars of the day.

Or at least it tried to in the case of Anita Bryant, who was to be a headliner at the “Christians for God and Decency” GOTV rally the week before the vote.

Gale Tolin of the Associated Press reported on April 19, 1978, in an untitled item (Bluestem has corrected typos in the text for ease of reading; the use ofthe word “homosexual” was standard for the time period):

Anita Bryant didn’t show up, but her husband took her place at a rally Wedsnesday night in support of a proposal that would remove homosexual rights from St. Paul’s human rights ordinance.

“Miss Bryan is ill,” said Bill Faulkner, spokesman for the “Christians for God and Decency” rally.

“She wanted to come, but was unable to.”

Miss Bryant’s husband, Bob Green, said her absence from the rally at the St. Paul Civic Center was not due to counter demonstrations- including a homosexual rights rally in the same building – or to any threats against her.

When Green was introduced, he won a standing ovation fromwhat police said was a crowd of 10,000 in the arena. He spokemostly about Miss Bryant, comparing her to other politically active entertainers including the actresses Jane Fonda and Shirley MacLaine.

She became controversial by leading the fight that successfully repealed a homosexual rights ordinance in Dade County’ Fla.

Patrolman Dan Vannelli, whowas handling security arrangements for the rallies, said therewere 25 officers on duty, whichhe said was the normal complement for any event expected to draw crowds in the hundreds.

About 150 people were on hand when the homosexual rights rally at the Civic Center began. Several wore purple arm bands bearing the word “love.”

That rally did not have the support of St. Paul Citizens for Human Rights, which said too many “outsiders” were taking part. The citizens group sponsored a demonstration at the Capitol where about 500 people gathered for a march. They sang, waved banners and distributed balloons urging “vote no” before beginning the mile march to downtown St. Paul and back.

Four years ago,the City Council added protection for homosexuals to the human rights ordinance, barring discrimination in employment,education, housing and public accommodations on the basis of “affectional or sexual preference.” The proposal before voters Tuesday would remove that clause. (Nexis all-news, accessed 1/2/2013).

Other news stories reported that the “People Loving People, Freedom Loving” rally included dancing and pie-throwing, so perhaps Ms Bryant’s illness was a sudden-onset pie allergy. No one I know was involved in the pie-throwing rally, but she had my sympathy in a small way, Having been hit by an a-political pie thrown by a gay friend in Sorin Cafeteria during the January 1977 interim term.

It’s not just a cast of different celebrities that marks the difference between the 1978 “Vote No” campaign and the 2012 version. The Lakeland Ledger reported in 1978:

. . .Out in the streets, a third group of homosexuals, clergy and civic leaders, including Mayor George Latimer, will rally for keeping the ordinance the way it is.

The issue has split the city’s church community. Angwin says 100 pastors will join Miss Bryant at the repeal rally.

But in announced support of homosexuals are Catholic Archbishop John Roachand dozens of bishops of the Lutheran, Methodist, Episcopal and Mid-America Baptist churches…

This past year, a different bishop funneled hundreds of thousands of church funds to promoting Vote Yes. Admittedly, it’s different issue, but it’s hard to see Nienstadt taking the stand that Roach did in 1978.

The day of the vote, my friends from campus and I headed to the polling place at a playground down Snelling Avenue. Since Minnesota had adopted same-day registration in 1974, we gathered our unregistered friends from the dorm, vouching for those eligible voters who didn’t have proof of residence. It seemed a carnival atmosphere on spring day close to the end of the term with so many friends from campus showing up.

Naturally, our youthful optimist was crushed by the two-to-one passage of the repeal. Fortunately, we had resilience, time and an 18-year-old legal drinking age to revive our spirits. Perhaps most enduring legacy was that we stayed engaged in this issue.

The AP’s Mary Vandemark reported the night of the election:

Shouts of “Hallelujah” and “Praise the Lord!” greeted announcements of vote totals at Temple Baptist Church, where about 200 proponents of the initiative gathered after the polls closed.

The church’s pastor, the Rev. Richard Angwin, was a leader of the repeal effort. He said the vote means homosexuals “will have to keep their sin quiet.”

In a victory address 90 minutes after the polls closed, Angwin called the amendment, approved by the City Council four years ago, “a travesty that the people of St. Paul would never have stood for had we been given the opportunity to vote.”

Kerry Woodward campaign manager for St. Paul Citizens for Human Rights, said Angwin and his followers based their campaign on “fear, hatred and deceitful tactics.”

“The people in this city do not realize that gay people are their own children, coworkers and next door neighbors,” she said. “Gay people are ordinary people deserving of basic human rights.” (Nexis All News, April 25, 1978, accessed 1/2/2013).

As the second, unsuccessful fight in 1992 to remove protection for LGBT people in St. Paul’s human rights amendment demonstrated, queer folk were not about to keep anything quiet, nor were we straight allies.

Bluestem suspects that those risk-adverse DFL leaders who Mannix mentions in his article give far more weight to the defeats like 1978 and Majority Leader Dean Johnson’s defeat in their marriage freedom calculus than they do the forward motion of equality.

Perhaps they should re-think their math. History is on the side of courage in this conversation and fabulousness is in the news feed as more same sex couples marry. Minnesota should join in those glad tidings.

Americans are tired of silly political games, of the brinkmanship that leads us to fiscal cliffs and the political caution that would turn a victory like the defeat of the marriage amendment into a liability.

The chance to reject the amendments brought voters to the polls and the DFL into the majority. A bit of boldness might keep pro-marriage freedom legislators from all parties in office.

Photo: Legislative Clerk David Surdez places the names of the 2013-2014 House members on the voting board in the House Chamber. The 134 name plates have to be adjusted by hand at least every two years. The legislative session is scheduled to begin Jan. 8.

One of the things that changed that board was the big turn out to defeat the marriage and voter restriction amendments.