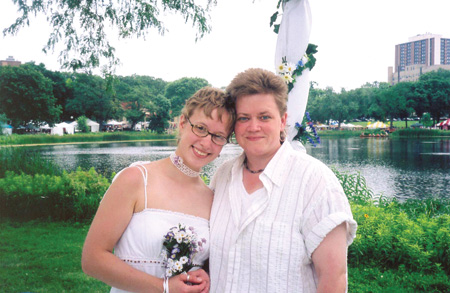 Lisa Baldwin put a lot of thought into her wedding proposal. Her partner, Jennifer Kusz, loves Walt Whitman’s Leaves of Grass, so Baldwin bought a small copy of the book and set about turning it into a memento of their relationship. She pasted in copies of their first emails to each other (they met online), pictures of Loring Park (where they had their first date) and photos of their pets (one dog, two cats, five rats, a hamster and two turtles). Then she glued a stack of pages together, cut a hole big enough for a ring, attached a picture of the ring over the hole and wrote “Will you marry me?” on the page.

“One of the first things she asked me is why I desecrated the book,” laughed Baldwin.

Eventually Kusz did say yes, so they set the date—for their second of three weddings in two years.

Baldwin and Kusz got their first taste of marriage in 2004, at the first annual Pride mass commitment ceremony held in Minneapolis’ Loring Park. The following year they got hitched at Pride again, but this time they had an individual commitment ceremony. Last fall, they had a church wedding, complete with a minister, a white wedding dress, family and friends in attendance and even a honeymoon.

And when it’s legal, they’ll do it again.

“We have our commitment to each other [and] we want to do anything we can to express that until it does become legal,” Baldwin said. “Once it becomes legal, I’m sure we’ll partake in that too, not just for benefits but to say … the quality of the relationship is more important than the gender of the people in it.”

Baldwin and Kusz are among dozens of couples who have tied the knot at Pride since 2004. Even though it isn’t a marriage recognized by the state, it’s a public declaration of their love, made in the presence of friends and supporters. This year Pride organizers again expect to see Loring Park packed with couples eager to say “I do.”

It’s a nice day for a Pride wedding
The first Pride celebration in Minneapolis, held in 1972, saw about 50 people gather for a picnic in Loring Park and a parade down Nicollet Mall, said Bill Nienaber, public relations director for Twin Cities Pride. In 2005, about 110,000 marched in the Pride parade and more than 300,000 attended the festival. It’s the third-largest Pride celebration in the country, if you’re measuring by the number of people: only New York’s and San Francisco’s events are larger.

It’s also one of the largest Pride festivals that’s still free, Nienaber said. Partly this is because the entire event is put on by volunteers. There is no paid Pride staff and the city donates no funds to Pride.

“We’d been talking about having a commitment ceremony, just talking about putting it together and inviting some friends and family, so when we saw it there it was like, hmm, this is really good,” Gonzalez said.

They called a minister from the list provided by Pride and arranged a time. (Individual ceremonies are offered Saturday and Sunday.) They didn’t get dressed up, said Gonzalez. “We’re basically cowboys. We wear lots of jeans, boots, Western shirts,” he said. “I wore shorts, because it was hot. But he wore the full cowboy outfit.”

They exchanged the rings they’d bought each other on their first anniversary, seven years before.

“What felt so special was that we were among other gays and lesbians,” Gonzalez said. “Having us being up there, on the altar, showing our love to each other, and other people there watching and supporting us—it’s a super great feeling, that there are people who know what love means. There’s people around, they’re watching you exchange your vows, and when he pronounces you a couple, that’s when everybody starts clapping and yelling ‘Yeah!’”

Ordinary people
Autumn Grant and Christina Kleve also got married in a private ceremony at Pride in 2005.

“We had talked about having a commitment ceremony but didn’t really know where to start,” Grant said by phone from South Dakota, where the couple now lives with Grant’s daughter, Justice. “Financially it wasn’t really there either.”

Kleve noted that the engagement period was much too brief. “I didn’t really have too much notice,” she said. “Two days before it happened she said ‘What do you think about this?’ So a lot of people I’d want to be there couldn’t be there.”

Nevertheless, she said, “It was the happiest day of my life.”

They got nearly everything they wanted—a minister, a certificate, a ceremony to photograph, seats for a few guests—and a little bit more. Fox 9 News showed up and interviewed them about the ceremony. A tape of their interview aired that night and several times since, Grant said.

Occasionally they’ll hear from someone who’s seen the clip, and so far the message is always positive. “No hate mail,” she said.

“We felt like we were together, married, anyway,” she said. “We’d lived together; we’re planning to have children together. [But now] I feel like I take the relationship more seriously. We’ve purchased a lot of things together and made a lot of future plans together, and she’s made a lot of sacrifices for me.”

They long for the day when they can legally be married, she said—for practical reasons. “The only thing that really bothers me is really the health care issue,” she said. “That and when you have kids it’s such a legal issue. We have to spend $600-$700 [a month] on insurance because we both have to be insured through different companies. And all the money we’re going to have to spend to prove that we’re the legal parents. … Heterosexual couples don’t have to do that, unless they split up.”

Commitment without the legal benefits
Baldwin also worries about insurance: hers is good, because she works for the City of Minneapolis, but Kusz, who works for a nonprofit, pays a lot more. She also ponders whether they’ll have problems buying a house together and adopting kids.

She added, “I’m hopeful. I’m thinking that someday gay marriage can happen, because if we look back to how women couldn’t vote and how colored people were separated … women had to fight, and people of color had to fight, so I’m guessing this is another fight we have to go through.”

Baldwin has a ready answer for those who argue that legal gay unions would denigrate the institution of marriage. “Who Wants to Marry a Millionaire—no one says that’s ruining the sanctity of marriage,” she said. “It’s just totally ridiculous. People watch it on TV—[they] just get their popcorn and laugh at it.”

If you want to wed