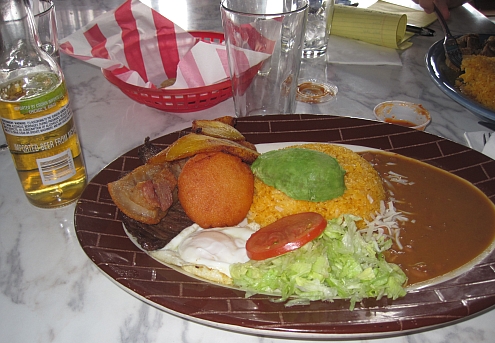 Although I tend to eat a lot of Mexican and Mexican-inspired foodstuffs, I recently realized that I’ve never intentionally sought out other types of Latin American delicacies. Rather than sitting around all day trying to figure out why this is, I immediately decided to remedy this issue, and at the suggestion of a friend, dined at Guayaquil at Lake St. and Bloomington Ave.

A simple Ecuadorian restaurant of modest decoration and awesome (I suspect) weekend karaoke offerings after 9 p.m., Guayaquil is almost hidden by all of the hubbub and bright colored buildings in the Phillips area of Lake Street. Despite its ability to blend in, I wouldn’t recommend overlooking this lovely gastronomical gem.

Having never sat down to an Ecuadorian feast, I wasn’t sure what to order. Sure, Guayaquil had plenty of safe, same-old offerings like fried rice and fajitas, but I wanted something adventurous – though not so adventurous as the items which included tripe. I wanted something new, that would knock my socks off and burn the name Guayaquil, and a map of South America, onto my belly. Under the menu heading “Especialidades de la Casa” one item caused for me the room to grow quiet, and my vision to tunnel: Bandeja Paisa. A dish that hails typically from Columbia, Bandeja Paisa is described in the Guayaquil menu as a “countryman’s platter of fried pork, fried egg, fried sweet plantain, an arepa (corn cake) and avocado with beans and rice.” Though not a countryman, I am pretty much always interested in fried pork and avocados.

I feel that typically $13 is a lot to spend on a dish that is mainly beans and rice, but the amount of food that filled my plate was definitely in proportion to the price. Despite being hungry, and a hearty eater, I found myself unable to finish the meal. This was actually a good thing; I was able to relive parts of the meal later, while rummaging through my fridge for a late-night snack. Pro tip: Always, always take home your leftovers.

The fried pork served was actually two different cuts of pork. One cut was more like a pork strip, while the other was literally just a slab of fried fat and was unbelievably delicious. The fried egg was neither too drippy, nor rubbery and added to the richness of the fried meat. While the rice and beans were pretty standard, the arepa was a nice addition to the typical starches, and the fruits offered a break from the heaviness of the rest of the dish.

In fact, the meal was so rich and filling that I am pretty sure that a lazybones like me probably doesn’t deserve (as far as caloric intake goes) such a rich, delicious meal of fats and starches. Of course, that’s never stopped me before.