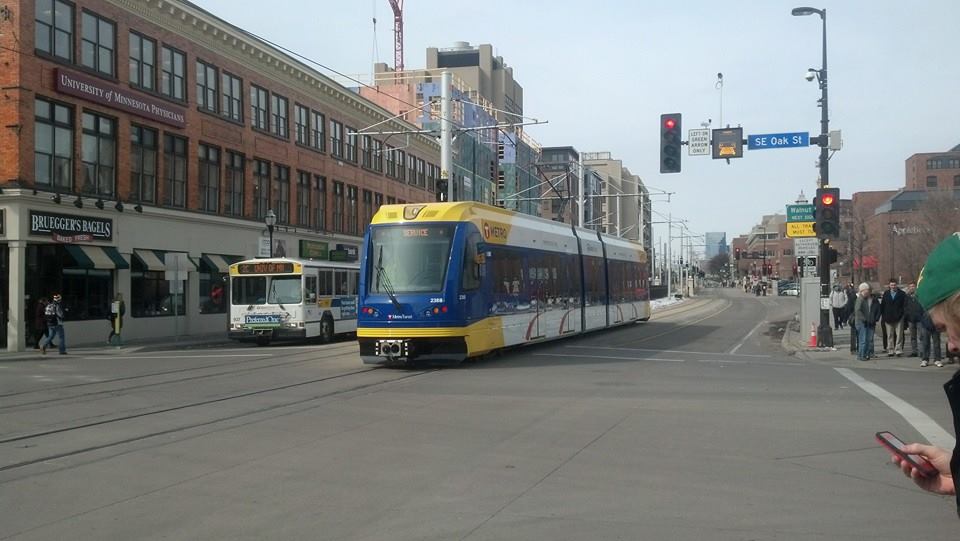 It has been several months since construction came to a close on Washington Ave SE’s stretch through the University of Minnesota’s East Bank, and I couldn’t be more conflicted about the result.

When comparing the reconstructed street’s physical design to its predecessor’s, what we have now is spectacular for all users involved. Despite involving a complex yet well managed sequence of bikeway changes, the street is far more cyclist-friendly than its previous design. I can happily say that, as on Nicollet Mall, cycling on a transit/bike-only street feels far calmer than in mixed traffic. Even with light rail in its testing phase and buses running at most hours, the pedestrian experience along this stretch is equally relaxed. Also, as always, freedom from automobile congestion results in a pretty dandy transit experience. 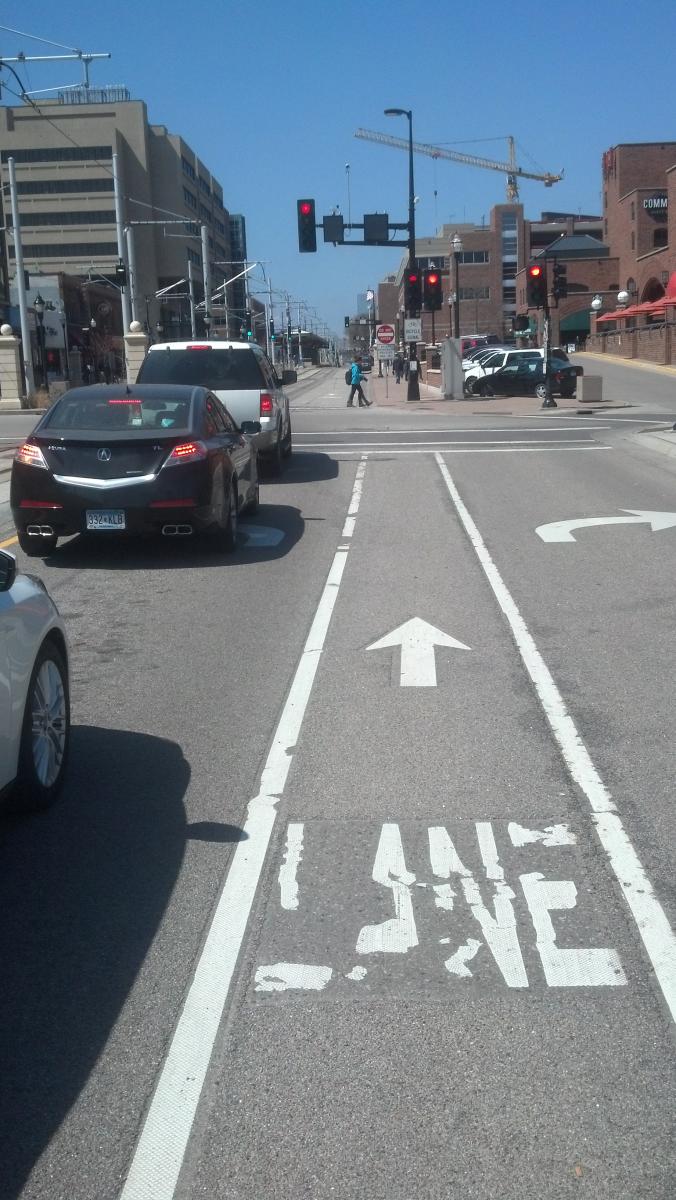 With a well timed bicycle signal, this potentially awful intersection is simple to navigate by bicycle.

While the physical design couldn’t be better suited for the context, the signaling situation serves no one well. To be fair, this is probably the first transit project in Minneapolis that involves transit-only streets intersecting with pedestrian-only streets, and certainly the first mass transit rail line to cross a Twin Cities college campus. Pedestrian safety has always been one of the U of M’s chief concerns, as it has been for comparable college campuses with rail transit interactions.

How safe is too safe?

However, the signaling situation is so oriented to pedestrian safety that it no longer reflects the realistic danger of crossing the street. Washington Ave SE is hardly the exception in this regard; you’ll notice that any city’s midnight red lights carry far less weight than their rush hour equivalent, simply because jaywalking is just less dangerous at midnight. When the ‘danger’ of a light rail train or bus only presents itself every 5 minutes or so, jaywalking across Washington Ave SE is far less dangerous than the signaling system would suggest. It’s quite hard to demand respect for a red light when this is the case. 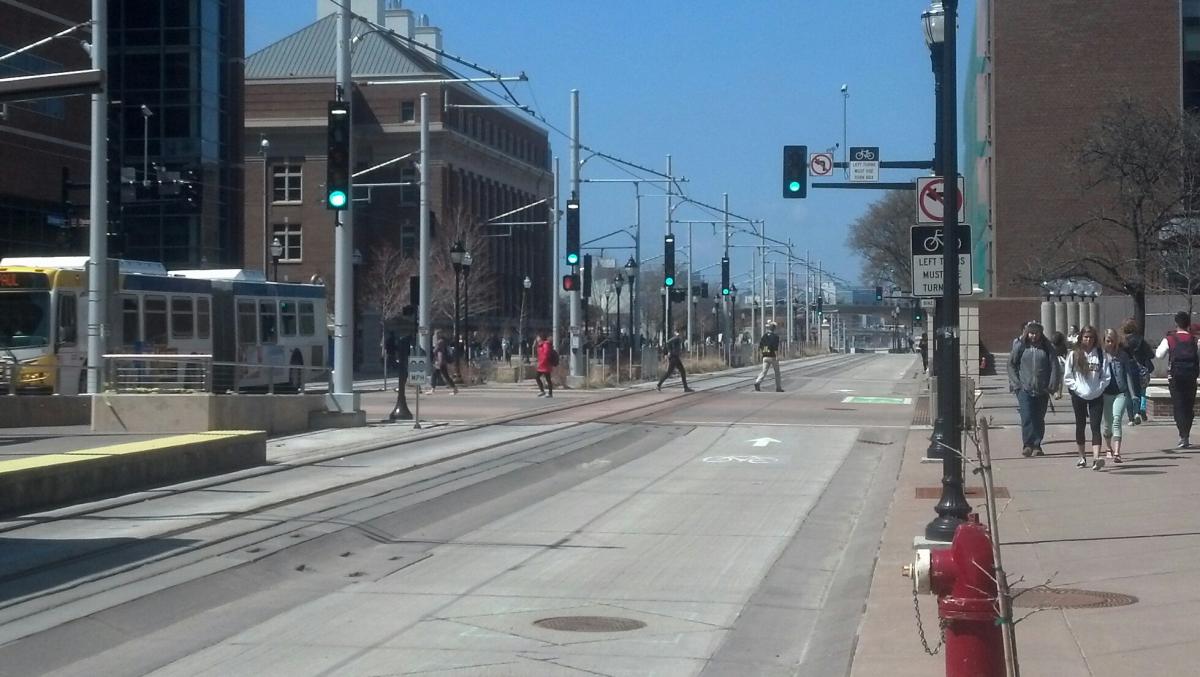 These inappropriate ‘rules of the road’ result in compliance by only some of the modes of transportation involved. As most pedestrian crossings across Washington Ave SE tend to take care of themselves regardless of the signal status, transit vehicles can find themselves waiting for no one at red lights and nearly colliding with pedestrians at green lights. With these obstacles, I’m not convinced that buses make it through the corridor faster than if they shared the road with vehicles. 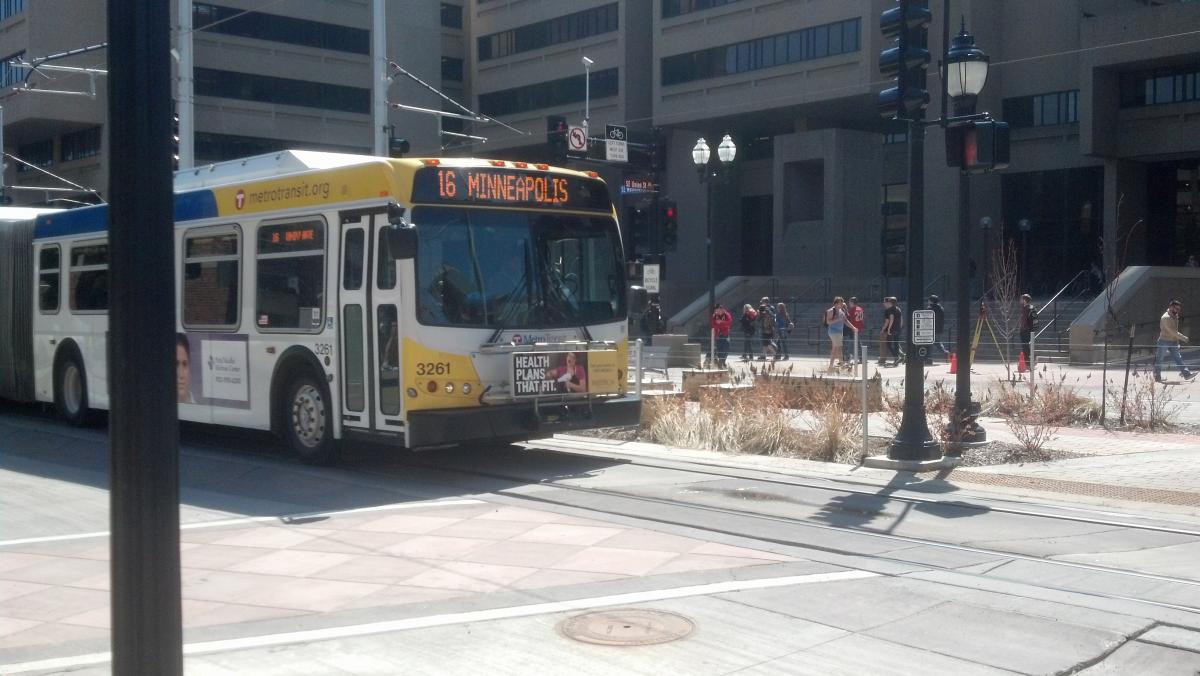 #16 bus, waiting for someone to cross… eventually…

When it comes to bicycles in the corridor, there’s simply no need for signaling whatsoever. Our Chain of Lakes is a magnificent example of countless high-traffic bicycle and pedestrian crossings that require no signal intervention. It’s tough to justify waiting at a stop light when pedestrians ignore their own constantly. Also, it’s just not that hard to avoid pedestrians on a bicycle. A ‘Cyclists Yield for Pedestrians’ sign would more than suffice at these intersections. 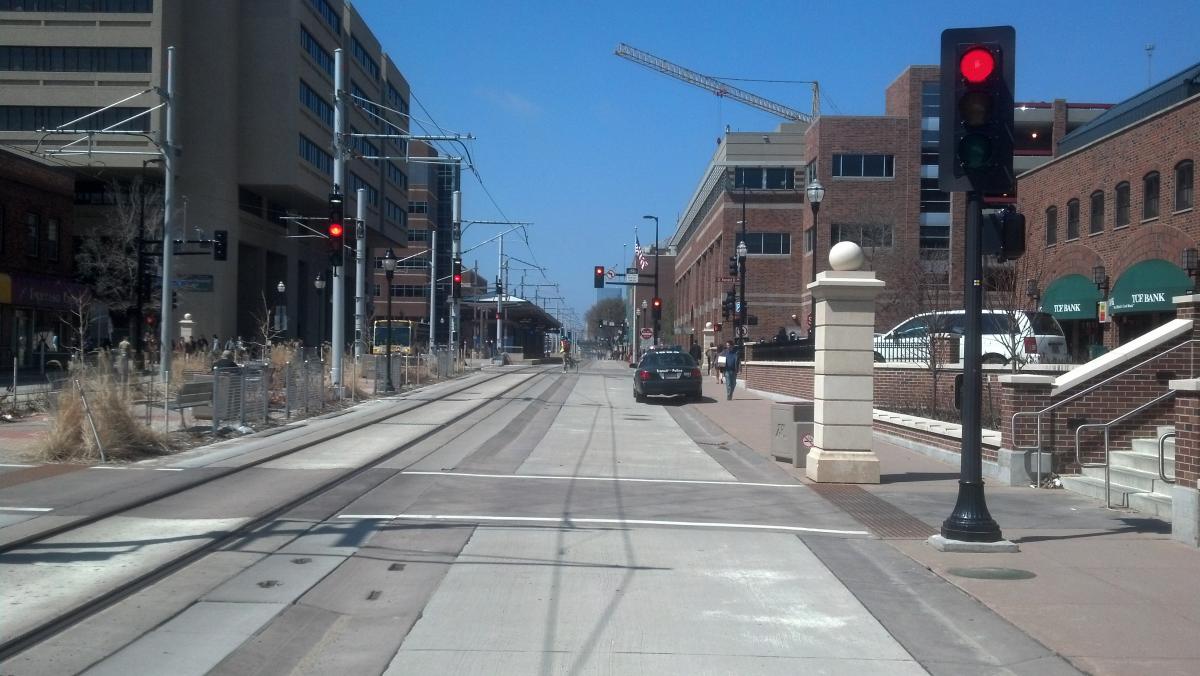 Would it really be unsafe for a cyclist to proceed?

I believe that if designed to more closely reflect the dangers involved, this street would see far more pedestrian compliance than it currently does. Rail transit vehicles cross non-signalized pedestrian streets in countless cities throughout the world. You’ll notice that these vehicles tend to travel closer to the speed of pedestrians themselves, allowing all participants ample time to react.

I’m hardly suggesting that light rail should run completely unregulated among pedestrian traffic. However, a signaling system that gives pedestrians an accurate safety assessment is inherently more trustworthy, and is much more likely to guide pedestrian behavior. Rather than a timed light, an approaching transit vehicle should trigger a red light for crossing pedestrians. The resulting signal would function more similarly to a railroad crossing than a traditional intersection. This guarantees that a pedestrian green light is displayed when crossing is actually safe, making it easier to take the entire signal system seriously. Additionally, a signaling system that gives priority to through transit, even at a slower speed, would likely result in quicker transit times across campus. This configuration could produce safer and more efficient use of the street.