The Office of the Legislative Auditor released its programmatic report after a year of auditing the four state advisory councils, Council on Asian Pacific Minnesotans, Black Minnesotans, Council on Chicano Latinos, and Indian Affairs Council).

The response from the councils is mixed, with some pointing back at the state for causing some of the deficiencies they have pinned to the them through budget cuts and bureaucratic inefficiencies.

Others point to the difficulty of measuring the effectiveness of councils that work on behalf of underserved communities.

In her published response to the audit, CAPM Executive Director Sia Her, said that “clearly, CAPM needs to do a better job.”

“We are in a state of transition as we seek to more effectively help state government achieve its goals,” Her said. “In an increasingly diverse Minnesota, CAPM and our other three councils, if properly funded and utilized in the policy-making arena, would contribute significantly to state government’s ability to more equitably and broadly accomplish its legislative goals.

“As our communities grow and the four councils become more effective at seeking a place at the table, we are committed to assisting government with finding ways to grow the pie and fostering cooperation rather than competition,” she added.

From the time the audit started the former executive director for 15 years, Ilean Her, resigned, and was replaced by Sia Her. The staff is also all new members. 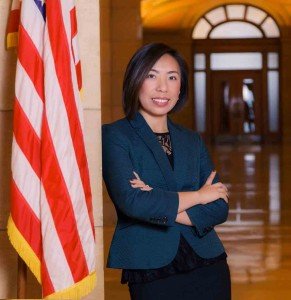 The audit criticized the board membership for being South Asian dominated and for having too many unfilled seats.

The report’s “Evaluation Report Summary – Key Facts and Findings” states that between 1963 and 1985, the Legislature created four minority councils because they had not been adequately integrated into state policy making. The statutes established council duties that included advising state policy makers and acting as liaisons, but the audit said their overall purpose remains unclear.

The audit accuses the councils of doing a poor job setting specific objectives and identifying outcome measures to assess the impact of their activities in more recent years, Teh audit makes the claim that the councils share similar concerns and duties but have little substantive collaboration.

The Governor has not always appointed council members in a timely manner nor in accordance with state law, and members’ attendance at meetings has often been a problem, the audit states. It goes on to say that communication between councils and community organizations that work with constituencies is inadequate and reflected in effectiveness as advisors to policy makers.

• Option 1: Maintain the four councils, but clarify their primary purposes; require them to adopt strategic plans, develop policies and procedures, and work more substantively with state agencies; and encourage them to become more involved in the appointments process and better communicate with the public.

• Option 2: Restructure the councils by placing them under the Department of Human Rights and requiring them to adopt certain operational changes.

• State laws give the four councils significant flexibility to engage in a wide range of activities.

• The councils have generally focused on cataloging their activities rather than measuring their impact.

Although they appear before the Legislature for funding, their budgets are small. Thus, the Legislature does not spend very much time examining the councils’ duties and activities.

• The councils have no clear statutory purposes.

State law sets forth a wide variety of duties for the councils. All of the councils are charged with making recommendations to the Governor and Legislature on issues important to their communities. Also, CAPM, COBM, and CLAC serve as liaisons to state policy makers for constituent organizations. MIAC serves as a liaison between state government and elected tribal leaders.

However, state law does not provide any direction as to how the councils should prioritize their activities, nor does it set forth any explicit goals, objectives, or outcome measures. As a result, the councils have significant flexibility to engage in numerous activities, all of which easily fall under the rubric of one of their broad statutory duties. This has generally resulted in a lack of focus and an inability to make a significant impact in any one area.

• The councils have done a poor job identifying specific objectives and outcome measures.

Over the last ten years, the councils themselves have done little to clarify expectations or measure the results of their work. For example, they have generally not complied with requirements that their annual reports identify the specific objectives they are seeking to attain and report on their outcome measures. The councils have generally focused on cataloging their activities rather than measuring the impact of those activities.

• Council appointments and meeting attendance have been problematic.

We found lengthy delays in the time required for the Governor to appoint voting members to some of the councils. For example, the time elapsing between the expiration of a member’s term and the appointment of a new member for CAPM averaged 26 months. The council has not reached its full complement of 19 voting members in the last 11 years. Four CAPM seats opened up in early 2013 that were not filled until January 2014. Also, statutes limit each ethnic community to one council member, but four of CAPM’s members in 2013 were Asian Indian.

We also found problems regarding attendance at council meetings. COBM had quorums at only 58 percent of its meetings in 2013, and three members did not attend a single council meeting that year. MIAC had a quorum only twice between January 2012 and December 2013.

In our surveys and interviews with constituent organizations, we found little support for or knowledge of council activities. Several constituent organizations reported having little contact with the councils. We also found that most of the councils were not using their Web sites to provide the public with useful information on their activities, upcoming events, and publications.

• In a letter dated February 26, 2014, CAPM’s Executive Director agreed with many of the evaluation’s key findings and supported Option 1 as “the best strategy to effectively serve our diverse Minnesotan communities.”

In a letter dated March 2, 2014, COBM’s Executive Director objected to the entire report, noting that it “traps the reader in a litany of revisionist history and the promotion of stereotypical rhetoric about African heritage people and other ethnic groups.”

In a February 26, 2014, letter, CLAC’s Executive Director said that the report “has very valuable recommendations” that can “improve the performance of CLAC” and “produce an impact on the disparities affecting the Latino community for the past several decades.” He said that a combination of Options 1 through 4 was the best way to achieve this effect.

In a letter dated February 26, 2014, MIAC’s Executive Director said that the Legislative Auditor’s Office “has chosen to ignore the unique nature of the Council and the crucial role that it plays in fostering and developing the government to government relationship between the state of Minnesota and the tribal governments within the state.”

The Program Evaluation Division was directed to conduct this study by the Legislative Audit Commission in March 2013. For a copy of the full report, entitled “Councils on Asian-Pacific Minnesotans, Black Minnesotans, Chicano/Latino People, and Indian Affairs,” 111 pp., published in March 2014, please call 651/296-4708, e-mail Legislative.Auditor@state.mn.us, write to Office of the Legislative Auditor, Room 140, 658 Cedar St., St. Paul, MN 55155, or go to the web page featuring the report. Staff who worked on this project were Jo Vos (project manager), Jodi Rodriguez, and Laura Schwartz.

Read the full report at www.auditor.leg.state.mn.us.