The Asian community of Minnesota honored individuals and organizations for service last Friday at the APIA Heritage Month Dinner and Awards Ceremony at the Prom Center in Woodbury. The annual event is organized by the State Council on Asian Pacific Minnesotans.

Dr. David Ong, DDS, President of the Fil-Minnesota Association, received the “Humanitarian Award” for his help with aid to typhoon victims in the Philippines.

The “Lifetime Service Award” went to Dr. Amos Deinard of the University of Minnesota Deptartment of Pediatrics and School of Public Health.

Deinard is also the former executive director of the Community-University Health Care Center that was designed to serve immigrant and refugee communities starting with the Southeast Asians in the 1980s.

Ram Gada, an Asian Indian on the Minnesota Historical Society Emeritus Council and participant in numerous Asian Indian organizations as India Association of Minnesota, was also presented with a Lifetime Service Award. 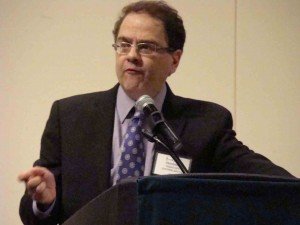 The Keynote Address was delivered by Mr. Narayana Kocherlakota, President and CEO of the Minneapolis Federal Reserve Bank (left). He told the audience of about 400 that growing up half Asian Indian and half Caucasian (HAPA), taught him to focus on diversity in the workplace and in the community.

The Federal Reserve is celebrating its 100 year anniversary, and Kocherlakota said diversity is at the heart of the organization, as it sets national monetary policies with geographic, multi-disciplinary, and intellectual diversity and attract and retain a diverse workforce.

Batica and CAPM Executive Director Sia Her spoke of their duties as liaisons between the community, legislators, the Governor, state agencies, and others; in recommending and developing policies to help the communities; and other duties set by law.

Batica stated that CAPM was “accountable to serve the community,” to “make opportunities equitable” and “be the change they were waiting for.”

Her pointed out that CAPM was “established for and by the people”, that “all have opportunity to make positive things happen.” She said they would need the communities help and input in carrying out the mandates and setting the goals for next year, including “jobs, education, housing and healthcare issues” and “policies for all people.”

The American Dream, families, and hard work were “universal values,” Her said, noting that ist is what aligns us with others.

“The government will be judged by how they treat children in the dawn of life, the elderly in the twilight of life, and the sick, needy and disabled in the shadows,” she said.

There was a mix of cultural performances by the Cambodian Culture Club, the Korean drummers, the Cultural Society of Filipino Americans, and the Asian Indian “R.G.K. Modern Indian Dance Academy.”